Kurds in Iraq: Back to square one?

The sudden shift in the balance of power between Iraq and its Kurdistan Region has been stunning, even by Middle East standards. 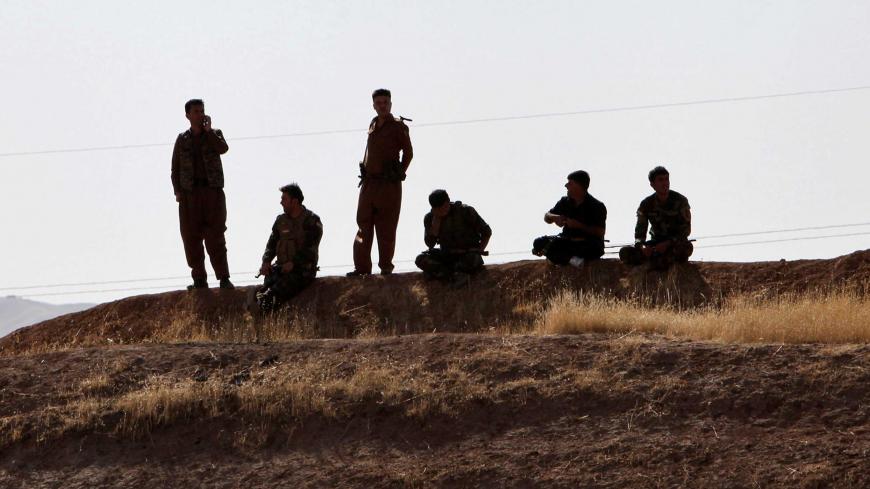 Although Kurdistan Regional Government (KRG) President Massoud Barzani may have thought the fall of Kirkuk to Iraqi government forces meant going back to the pre-2014 lines — when the Iraqi army collapsed and evacuated Kirkuk, and Kurds imposed their control on some of the "disputed territories" — this is not true.

In fact, before the Kurdish independence referendum on Sept. 25, I had voiced concern to Voice of America that Kurds may face a disastrous situation reminiscent of that fateful year, 1975.

In 1975, the uprising led by Kurdish national icon Molla Mustafa Barzani (Massoud's father) collapsed when Iran, then ruled by Shah Mohammad Reza Pahlavi, withdrew support from the Kurds as part of the Algiers Accord with Iraqi strongman Saddam Hussein. As a result, thousands of Kurdish fighters and their families fled to Iran. The elder Barzani was then hospitalized in Washington, where he died in sorrow.

Soon, the vanguard of the "Kurdish Revolution," the Kurdistan Democratic Party (KDP), split, and the breakaway leftist faction led by the late Jalal Talabani founded the Patriotic Union of Kurdistan (PUK). The Kurdish political movement fell into disarray and could recover only years later, mainly thanks to a long and extremely bloody war between Iran and Iraq, which lasted from 1980 to 1988.

The year 1975 was on my mind this week as the Iraqi army, federal police and Shiite-led Popular Mobilization Units (PMU), commanded by Hadi al-Amiri and Abu Mahdi al-Muhandis but effectively under Iranian control through its Islamic Revolutionary Guard Corps (IRGC), took over Kirkuk and almost all the other disputed territories between the central government in Baghdad and the KRG.

I asked Omar Sheikhmous, who founded the PUK along with Talabani, Nawshirwan Mustafa (late leader of Gorran) and current Iraqi President Fuad Masum, whether one could draw parallels between what the Kurds experienced in 1975 and the loss of Kirkuk. After all, Kirkuk has always been the apple of the eye of Kurdish aspirations for self-rule and, ultimately, independence. Talabani used to emphasize its importance by his well-known motto, "Kirkuk is the Jerusalem of the Kurds," though Kirkuk did not offer spiritual value. Kurds were mainly interested in the wealth that lied underneath it — the oil — without which the Kurdish dream for independence could not be economically viable.

Sheikhmous responded, "There will be a period with demoralized Kurds, chaos and quite a long contemplation. It may take at least a year or two."

In a long conversation I had with Nawshirwan in 2003, he had told me about the 1975 uprising. He said, "Everything was about Kirkuk. Saddam even proposed dividing Kirkuk in two, where the central government in Baghdad would administer the western part and the Kurdish autonomous administration with Erbil as its center [would administer] the eastern part." He added, "Molla Mustafa refused. He wanted all of Kirkuk." When I asked Nawshirwan where the oil fields were, he flashed a smile: "On the western part!" That year, I heard the younger Barzani state how he cannot withdraw his claim from Kirkuk, reminding me that it is his father's legacy and a "main principle that Kurds cannot forgo."

Back to 2017: The blame game over Kirkuk started on Oct. 16, while the PMU was still in Kirkuk and facing no resistance from the Kurdish peshmerga. From Kirkuk to Tuz Khormato, roughly 46 miles south, some 50,000 fighters PUK peshmerga stood, but they did not fight. They simply facilitated the PMU's advance. The KDP was quick to accuse a PUK faction that included Talabani's wife Hero Ibrahim Ahmad, his son Bafel Talabani and his nephews Lahur and Araz Talabani of "treason," alleging that they sold out Kirkuk to Iranian Maj. Gen. Qasem Soleimani and Baghdad.

In turn, Lahur Sheikh Jangi Talabani, who is in charge of the PUK's counterterrorism units, accused Barzani for his ill-conceived independence referendum and alleged that the KRG president, through the referendum, planned to wrest control of Kirkuk from the PUK, just as when he had invited Saddam's army into Erbil on July 31, 1996, which the PUK controlled at the time.

Lahur's remarks suggested that a certain faction of the PUK negotiated, bargained and acquiesced to Tehran and Baghdad's demands and "peacefully" turned over Kirkuk to the PMU and the Iraqi army. Both the KRG vice president and Kirkuk's PUK-affiliated governor sided with Barzani and took refuge in Erbil.

But it is also interesting to note why the KDP peshmerga, which controlled the Avana and Bai Hassan oil fields in western Kirkuk since 2014, withdrew without firing a shot. These two oil fields provide almost half of the KRG's oil production at 295,000 barrels per day. Their loss puts the last nail in the coffin of the Kurdish dream for independence. The KDP peshmerga also evacuated the disputed territories in the northwest, like Sinjar and Bashiqa in the mainly Christian-inhabited areas northeast of Mosul.

With the Kurdish leadership accusing each other with treason, the Kurdish aspirations have inevitably taken a U-turn. Especially after 2014, it was widely believed that Kurds' destiny would be reshaped in a way quite different than it had been after World War I, when many thought (rather inaccurately) that the Sykes-Picot Agreement divided Kurds and denied them statehood.

While KDP circles and even some segments of the PUK blame "a certain faction of the PUK," the KRG president is not immune to criticism. In a piece titled "What the KRG's Loss of Kirkuk Means for Iraq," Assyrian writer Max Joseph claims the referendum was Barzani's fatal misstep and that it brought all the consequences the Kurds are facing now. Joseph wrote, "The KRG gambled and lost, and that was very much the Barzani family's call. Greed is a horrible thing, and it remains their cardinal sin."

Ben Van Heuvelen, the editor-in-chief of the Iraq Oil Report, summarizes the current situation as follows: "It's a paradigm shift in Iraq akin to what happened in 2014 when [the Islamic State] came in. The territorial boundaries between the Kurdistan region and the federal government have been redrawn and the control of northern Iraqi oil resources has shifted. … That's devastating for the Kurdistan region's economy. … It undermines [the KRG's] ability to function as an economically independent state."

For me, recent events bury the dream of an independent Iraqi Kurdistan for at least a generation. Geopolitically, Iran now has the upper hand in Iraq in a way it never had before. Tehran added Kirkuk (with a big chunk of the PUK on its side, thereby dividing the Kurds) to Baghdad and its Shiite-dominated regime.

Turkey, through Barzani's KRG, has been the dominant regional actor in northern Iraq. Now, although Ankara is happy to see the Kurdish grip over Kirkuk gone, it has to reconcile itself to be second fiddle to Iran in Iraq.

Iraqi Kurds are the main losers in the regional equation. From the brink of a long-cherished goal of independence, they now find themselves close to division, similar to 2003 and perhaps like before 1991. The worst outcome would be a repeat of the Kurdish civil war of 1994-1997.

If such an outcome is averted — and it should be — an unstable Kurdistan that diffuses instability to every corner of the Middle East is the best possibility for the foreseeable future.