A women's association in the Tunisian countryside works on breaking the societal taboo of women remaining childless by choice. 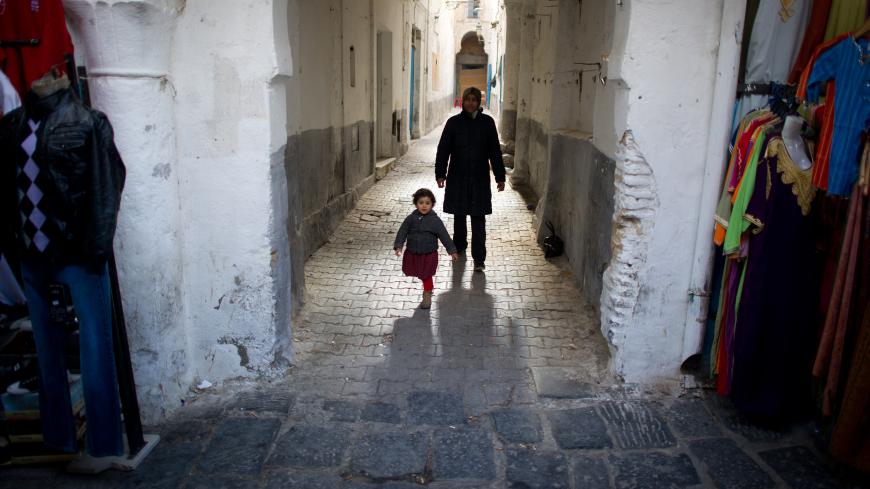 A mother and her child walk in a street of La Medina in central Tunis, Tunisia, Jan. 21, 2011. - MARTIN BUREAU/AFP/Getty Images

“Having children is something like a visual tag in Tunisia. If you walk in the street alone with your husband and you don’t have a child who completes the ‘frame,’ people would ask, ‘When are you going to have children? Why don’t you have children? How is your health? Are you OK?’ Something is missing for them in the picture,” Nacyb Allouchi told Al-Monitor.

Allouchi is a 34-year-old woman originally from Ain Draham, a mountain town in the governorate of Jendouba, in northwestern Tunisia. Since getting married, she has been living in Jendouba, her husband’s town, which has around 50,000 residents and is considered a conservative town in the Tunisian countryside, not far from the Algerian border. In 2013, Allouchi co-founded Rayhana, an association for women in Jendouba.

“Even if I am the president of an association with multiple activities, in our society a woman is first of all the daughter, then the wife and the mother,” Allouchi said. “I can be perceived as active or complete only in relation to these roles and activities.”

Before having their first child, Allouchi and her husband, Adnan, had spent five years of marriage without having children. “It was not a choice from the beginning, but I found it important to spend all this time with my husband,” she said. “On the other hand, I realized that during these five years, all my neighbors were pitying me, thinking that I am sad and they did not come to visit me often.”

In mid-September, Allouchi and the other women at Rayhana organized a screening of the film "Lunadigas," an Italian documentary tackling the delicate issue of women who decide not to have children in an ironic, original and sometimes funny perspective. A week earlier, the film won first prize in the documentary category at the Chouftouhonna Feminist Art Festival in Tunis. Subsequently, the Italian directors joined the women in Jendouba for the screening and the debate that followed, which Al-Monitor attended. In the dialect of the Italian island of Sardinia, "lunadigas" denotes the rebel sheep that do not bear lambs.

“The issue of not having children is a taboo in Tunisian society,” Marwa Whibi, a member of Rayhana, said during the debate that followed the screening. “So first of all, I congratulate the directors for talking about it. It should be a personal choice and not a societal duty.”

But not all of the women at the debate agreed. One woman said, “I think that women can do everything: being a mother and working hard, because we can multitask and manage both — career and motherhood — according to our religion as well.”

Whibi added, “Yes, but your work can also be your full-time dedicated mission, and you don’t have to think of having children as your main mission.”

Some of the women present suggested that women who do not have children and are unmarried are unhappy and need to see a psychologist.

At Rayhana, young women also run a local radio station, Radio Rayhana, where they discuss social and gender issues in their communities. They manage a bed-and-breakfast for guests and a small gym. They also grow their own vegetables in the garden and sell the produce.

“In Rayhana’s vision, women represent multiple things: the voice — that’s why we run the radio station; the body — hence the gym; and cultural expressions — so we organize film screenings and debates,” Allouchi said.

Tunisia, considered one of the most advanced countries in the Middle East and North Africa in terms of women’s rights, recently witnessed the parliament passing a law to end violence against women. It also abolished a decades-old ban forbidding Muslim women from marrying foreign, non-Muslim men. But human rights associations and women rights advocates believe that the path to equality is still far from realized, both at the social and cultural levels.

Hayyet Tabboui, from Ghardimaou, a border town with Algeria, attended the film screening. “The film is … formidable!” she told Al-Monitor. “When I was a child — 5 or 6 years old — we would sit with my cousins at my grandmother’s house, all girls, and she would ask, ‘How many children will you have when you get married?’ My cousins replied, ‘I want five children!’ ‘I want three!’ ‘I want four!’ I simply said, ‘Zero.’ They were all shocked, but I explained that we were already a lot of children. Since then I felt I don’t want children even if I love my nieces and nephews and all the children I see. For me it was a very natural choice.”

Tabboui, 36, is the founder of another association in Ghardimaou, Sidi Bouzitoun, which deals with ecotourism and nature preservation, especially old trees. The association's members meet under a centuries-old olive tree, the place where her grandmother would also spend time when she was young. “Now when I tell my grandmother about women like me who don’t want to have children, she says that each one is a ‘mara’a w nuss’ — ‘a woman and a half’ — acknowledging their strength to take such a position and make choices in their lives.”

Tabboui said she knows other women in Ghardimaou who decided not to have children, like three sisters working in the field of agriculture, who have another sister and brother married with children.

Now that Allouchi has her son, the world around her changed. “The baby is like a passport, a visa. Through the infant, society communicates with the woman. And now all the neighbors come to visit me and the baby at home.”

Associations like Rayhana work hard to change the vision of women in Tunisian society. “The change does not happen quickly,” Allouchi concluded.