Marwa Heni, who has founded an association to help Tunisian marginalized groups, pins her hopes on the new president. 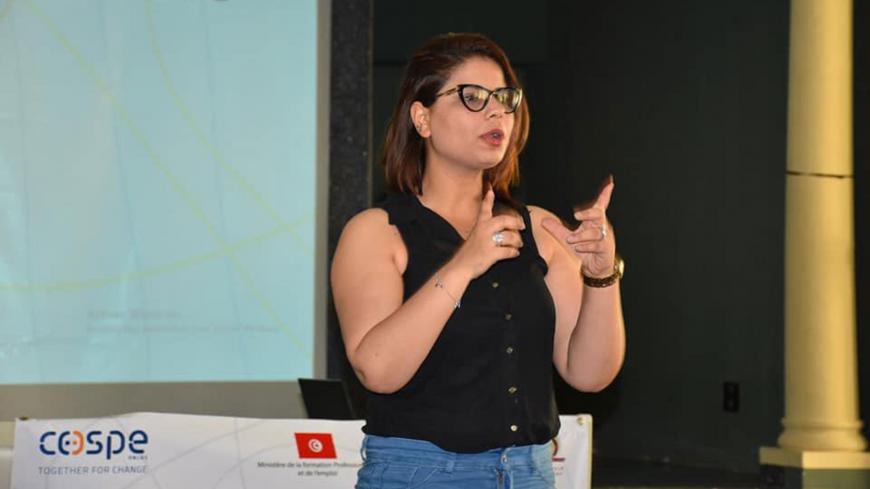 Marwa Heni can hardly believe how timid she had been nearly a decade ago — before the Tunisian revolution of December 2010- January 2011. “I was shy and I never would talk in public or before strangers," she told Al-Monitor. Back in December 2010, Marwa was a university student completing the last of her exams when her brother was severely injured by the Tunisian police in the protests at their hometown of Sidi Bouzid.

The demonstrations had started a few days after Mohammed Bouazizi set himself on fire and died weeks later. Former dictator Zine El Abidine Ben Ali’s repression was harsh and police brutality rampant. Majd, Marwa’s 18-year-old brother, was one of the first people to be injured in the demonstration; he lost his right eye and his nose and forehead were broken. He was taken to the hospital in Sfax, which the police then besieged — and later the family's house in Sidi Bouzid — to prevent him from telling his story to the media. Nevertheless, a Tunisian journalist managed to speak with Majd and Marwa’s mother, a single unemployed parent, but the story did not see the light of day as the police arrested the journalist and broke his camera to ensure no images were ever published.

At the time, Marwa said that her brother was completely on his own, without any outside help. It was only weeks later, when Ben Ali’s regime collapsed, that some unions and institutional figures claimed that they had taken care of Majd, whereas in fact, they had not.

Nine months later, in September 2011, Majd was finally able to leave for Germany so he could have an eye operation in a special clinic. By then, the full responsibility to run the family's household rested on Marwa's shoulders. In dealing with the bureaucracy to get her brother treatment abroad, she had to force herself to talk to strangers — bureaucrats and nongovernmental organizations (NGOs) — to get things done.

“The revolution changed everything: not only the society and its aspirations, but also myself and our family relations. I had to look for a job to support my family,” Marwa said. A few months later, she signed up for a training with an NGO — the Tunisian Development Association — and discovered a new world.

“I didn’t know what an NGO meant back then. During the reign of Ben Ali, the only organizations were those run by the state," she noted. “I didn’t know what campaigning or fundraising was, nor what was meant by social and solidarity economy."

Inıtially, she worked on administrative tasks, but after a while, she was asked to work on content. At a social and solidarity economy forum in 2013 in Sidi Bouzid, her supervisor asked her to take the floor and introduce the work of the organization, barely two minutes before the scheduled speech.

Marwa said she was unable to do that, but her supervisor insisted, saying, “You know everything, you can do it."

From that moment, Marwa never stopped talking in public. In 2014, she started working with the Italian NGO Cospe, which supports social and solidarity economy projects in Tunisia. In 2016, she co-founded her own association — Association d’Appui a l’Economie Sociale et Solidaire (Economic and Social Solidarity Association, or cit'ESS) — in Sidi Bouzid.

One of the main projects they are working on today is “Futur Proche" ("Near Future"), which includes five Tunisian municipalities and regions — Sidi Bouzid, Jendouba, Kasserine, Mahdia and Tataouine — considered before and after the 2011 revolution as the most marginalized regions in the country, and where the uprising began. In partnership with Tuscany region, three Italian municipalities, Cospe and other partners, these five Tunisian regions work on decentralization from the central state’s institutions; active citizenships’ participation and local governance; development of local social economy, with the implementation and support of local enterprises; and basic health services. Marwa, together with her colleague Hichem Hajlaoui, is responsible for the project in Sidi Bouzid.

“We created some shops in Sidi Bouzid, Jendouba and Kasserine where local farmers and artisans can commercialize their handmade work and food farming, guaranteeing quality and improve a new mentality of a healthy economy, protection of workers and environment,” Marwa added. “Achieving these goals in my community is part of the revolution Tunisians aspired for socio-economic rights.”

"Working with these organizations, we try to create an alternative economy that looks at all the steps from production to distribution and aims at developing local enterprises, challenging the high rate of unemployment all over Tunisia, but especially these regions," Alessia Tibollo, project coordinator and Cospe’s Tunisia representative, told Al-Monitor.

Marwa and her organization focus on women's labor and productivity, so one of the partners of the project is a women's association in Jendouba called “Rayhana."

According to Nacyb Allouchi, president of the association, one of the big problems of the region — and Tunisia in general — is that women do domestic, agricultural and artisanal work, but they are not paid since it is considered work for the family. "Or they are exploited in agricultural fields," she told Al-Monitor.

The only female group of farmers in Sidi Bouzid working with Marwa’s organization call themselves “Mra w nus” — which in Tunisian dialect means “A woman and a half” — describing the value of one woman’s work as more work than a single person could achieve. The expression is inspired by Tunisian poet Sghaier Ouled Ahmed who, with the same expression in classical Arabic, honored the value of Tunisian women.

Earlier this year, Marwa traveled to Germany for the first time to see her brother, who stayed there after the operation and has found work. “This also coincided with a great change in Tunisia: the democratic and free decision of a new president, which has made me really optimistic about the future,” she said.

Within a short period, Tunisians have witnessed the death of former President Beji Caid Essebsi in July, the death of former dictator Ben Ali in September and the parliamentary and presidential elections in which Kais Saied was elected as the new president during the second round this month. Marwa hopes for the Tunisian people to see a real change. “For us, the president of the republic — even if symbolically — is the face of the country and I trust someone who is not part of a political party. I have made my personal journey after the revolution. Now we are waiting for new things to come,” she concluded. 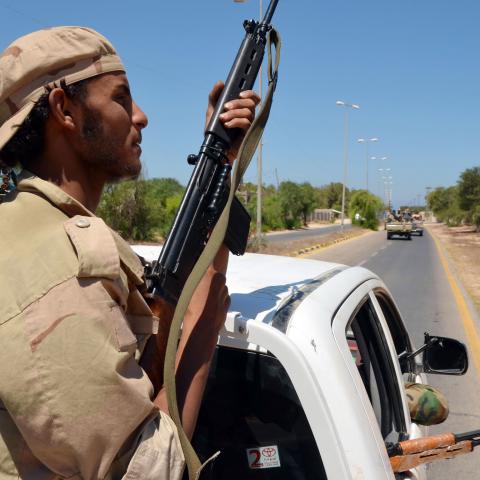