Five years on, have things changed in Tunisia?

Tunisia’s economy and working conditions remain gloomy for vendors who sell their goods on the same street where Mohamed Bouazizi lit himself on fire in 2010 to protest the situation. 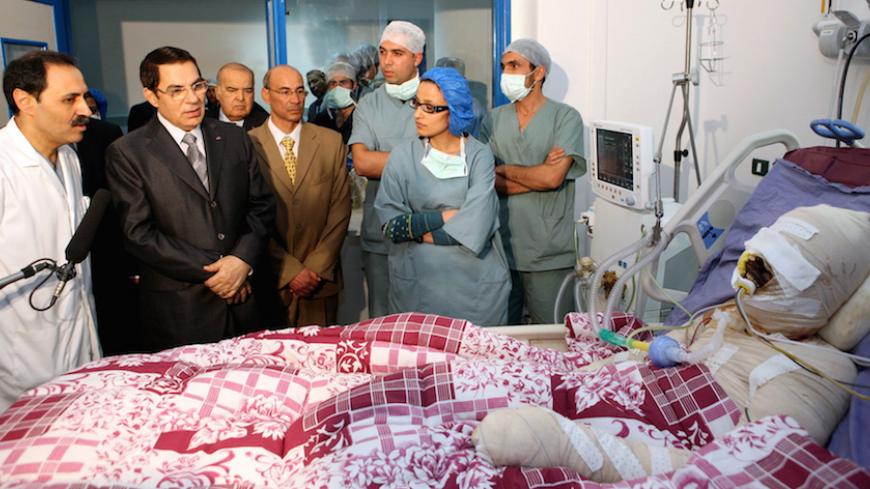 Tunisian President Zine El Abidine Ben Ali (2nd L) looks at Mohamed Bouazizi (R) at the hospital in Ben Arous near Tunis, Dec. 28, 2010. Bouazizi, who had set himself on fire in a statement of protest, died the next month. - AFP/Tunisia PRESIDENCY

SIDI BOUZID, Tunisia — It’s been five years since Mohamed Bouazizi set himself on fire outside the municipal building in Sidi Bouzid, a small town in the heart of Tunisia. While his act had profound international repercussions at the time, some residents say little has changed in their town.

Fed up with a lack of economic opportunity and years of harassment by corrupt police, street vendor Bouazizi made a desperate cry for help on Dec. 17, 2010, and died 18 days later in a hospital. His act led to protests that helped oust President Zine El Abidine Ben Ali, paving the way for an immediate and fairly peaceful democratic transition. It also helped inspire a whole region to stand up against dictatorships in the Arab Spring.

But for the vegetable sellers in Sidi Bouzid, little has changed for the better.

“We earned more before the revolution,” said Abdelassalam Bouazizi, a relative of Mohamed. They used to work side by side selling vegetables and fruit. In his opinion, the situation was better during Ben Ali’s administration. Then, at least, there were more customers and he had a higher income. Today, he earns just enough money for a day’s food.

A block down the road from Abdelassalam Bouazizi’s cart, Wahid Slimani has been selling vegetables for three years. He and his brother, who live in the village of Hiehriya, travel the 12 miles (19 kilometers) to Sidi Bouzid to sell peppers, potatoes and tomatoes. But customers are few these days, he said.

Slimani doesn’t approve of Bouazizi’s act because under Islam, suicide is considered a sin. He also is disappointed that despite the upheaval, not enough has changed.

“We need another revolution,” he said.

Yet Slimani admits he was able to vote in the country’s first free and fair elections, which were held Oct. 23 and Oct. 26, 2011, followed by the presidential vote on Nov. 23, 2014. Voting is important, he said, a duty. He also notes that he can speak more freely now since Ben Ali was ousted.

To some, however, freedom of expression comes with dangers. Abdelassalam Bouazizi told Al-Monitor he wanted to talk about his relative, but hesitated. Looking around cautiously, he mumbled, “Not here, not now. Maybe later, in private.” There are too many eyes and ears at the market, he explained worriedly.

The past five years have seen little economic progress. Unemployment, a long-term problem, stands at slightly more than 15% now. It was 13.3% in 2009 and 14% in 2010, according to CIA World Factbook figures.

Hmaidia Mahjoub sells vegetables on the same street where Bouazizi spent his last moments before setting himself afire. Mahjoub said he used to have a good job with a Swiss construction company. He had a car and earned 1,500 dinars (about $742) a month. Today he is struggling to make ends meet, as the company left Tunisia at the time of the revolution. On a normal day he brings in $5 to $10, barely enough to cover his monthly rent of $150 and support his stay-at-home wife and two children.

“The economy hasn’t improved,” he said. Mahjoub has fewer customers. He said he sells roughly 5-10 pounds of vegetables per day, while before he could sell as many as 20 pounds.

He must also pay about $1.50 a day to rent the vegetable cart. “Then there are the so-called taxes,” he said. The “taxes” are bribes to the police to let them stay where they are. They are not technically allowed to sell vegetables on the pavement, but there is no other place to go. Vendors who refuse to pay are harassed and have their scales or fruit confiscated, he explained. These are some of the same problems Bouazizi was facing when he set himself on fire.

Though the vegetable sellers’ situation seems gloomy, there could be a solution on the horizon. A market space is under construction, and vendors will be able to rent space and keep their business under a roof. Each vendor will need to pay a yet-undetermined fee in rent. Seller Lamin Saidi, who said he doesn’t expect to be charged much, is looking forward to moving. The space, funded by the European Union, should be finished in early February.