10 years on, Tunisian emotions mixed in birthplace of Arab Spring

Ten years after the first Arab Spring protests erupted in the central Tunisian city of Sidi Bouzid, the locals are still suffering economic hardships amid a lack of government support. 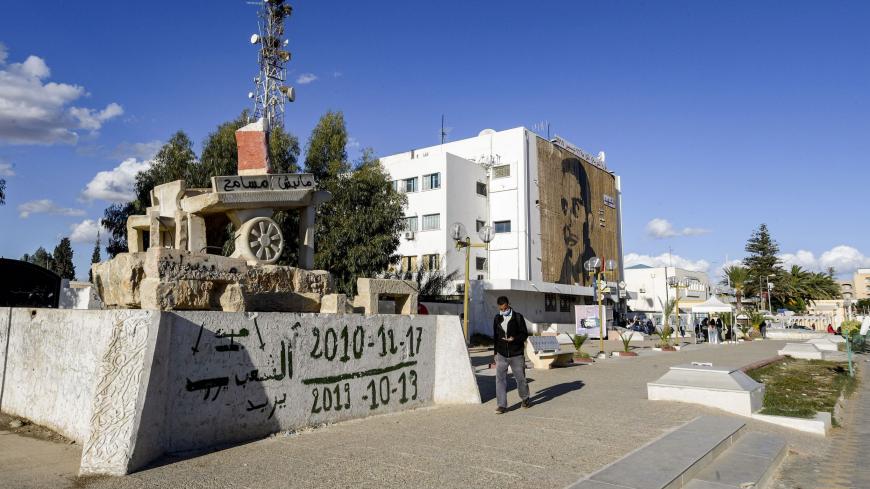 A man walks past a sculpture of Mohamed Bouazizi's cart (bearing text reading in Arabic "I do not forgive") in the square named after him in the center of the central Tunisian town of Sidi Bouzid, the cradle of the 2011 Tunisian revolution, where unemployment remains high 10 years later, Oct. 27, 2020. - FETHI BELAID/AFP via Getty Images

SIDI BOUZID, Tunisia — In the heart of Tunisia’s central town of Sidi Bouzid is a statue of a fruit cart towering above the presidential seat of power — a homage to fruit vendor Mohamed Bouazizi’s storied role in setting in motion the country’s 2011 revolution.

The 26-year-old street vendor set himself alight on Dec. 17, 2010, after a dispute with police who confiscated his handcart and produce — his only way to make a modest living for a household of eight. The desperate act of protest ignited a tidal wave of demonstrations in Tunisia that ousted the country’s longtime autocratic ruler and eventually rippled across the region.

A decade later, Tunisia has a new government, a new constitution and more democratic freedoms, all fruits of the movement that began in Sidi Bouzid’s streets. Unlike other major Arab Spring countries whose protests were either quashed or devolved into civil conflict, the country is often hailed as a democratic success story.

Nevertheless, worsening economic conditions, chronic joblessness and perceived entrenched corruption have dimmed the shine of Tunisia’s Jasmine Revolution. For some, conditions have grown so dire that they now question whether the late Bouazizi’s legacy is a blessing or a curse.

On Sidi Bouzid’s main boulevard, where the fruit seller is also honored with a large portrait opposite the city hall, young residents share mixed feelings about the decade-old uprising.

“Some things are better and others are worse,” said Nour, a 30-year-old factory worker who complained that rising prices and stagnant wages have made it difficult to scrape by. “Bouazizi’s legacy is a blessing in terms of freedom,” Nour, who preferred to withhold her full name, told Al-Monitor. “But when I look at the economic situation, I sometimes see it as a curse.”

Alaa Kadri, a 29-year-old university graduate speaking from a smoky Sidi Bouzid cafe with a small group of friends, also said that economic hardships are testing people’s faith in the country’s democratic path. Like many in the area, he is out of work, and his former job at a local school paid only $130 a month, a salary he said is not uncommon in the area. Many of his friends are disillusioned with their economic prospects and hope to leave the town for better opportunities abroad.

Youth unemployment is rife in Tunisia’s underdeveloped rural and interior towns, and work has been even harder to come by due to government-imposed lockdowns and curfews to curb the coronavirus pandemic. In Sidi Bouzid, the unemployment rate is estimated at up to three times the national average of 18%, and only one new major factory providing some 500 jobs has popped up in recent years.

The lack of jobs, government neglect and shortages of basic goods have sparked protests in the town and others nearby, sometimes disrupting industrial activity, including in the crucial phosphate sector.

Young Tunisians desperate for an alternative are meanwhile risking illegal sea crossings into Europe in record numbers, with nearly 13,000 recorded cases from January to November this year.

Riadh Abidi, president of the Sidi Bouzid-based Tunisian Association for Cultural Action, said the widespread anger and despair in underserved regions is due to the state’s “unfulfilled promises” of jobs and development.

“There's an absence of achievements and an absence of a clear vision,” Abidi told Al-Monitor. “There's no real vision for Tunisia's development. Everything's blurry … There's a lack of trust between the citizen and the politician.”

A young man named Bilel who took part in the initial 2010 protests in Sidi Bouzid agreed that the country’s political class is to blame for the disappointing pace of change.

“The revolution gave us a chance, but that chance was stolen by the thieving politicians,” he told Al-Monitor.

Farouk Smari, a well-known photographer and blogger in the town, added that he remains “hopeful for change, but skeptical” because of politicians’ empty talk.

One encouraging sign, he said, is that people have begun taking matters into their own hands through grassroots initiatives, working together to repair rundown infrastructure and schools when the government fails to act. “The people of Sidi Bouzid are helping themselves by themselves,” he told Al-Monitor.

Abidi, whose association works to bring cultural resources such as theatre and art to underprivileged regions, said that civil society has an important role to play in filling the void. “If there's hope today, it's hope in civil society's initiatives,” he told Al-Monitor.

It is perhaps this determined spirit that drives youth like Kadri to continue to draw inspiration from the gains of the revolution — and cling to the hope that Tunisians’ dreams of freedom and economic prosperity will one day come to fruition.

“I really hope that [the revolution] will be successful and I believe that,” Kadri told Al-Monitor. “It might take a long time, but I believe it will happen.”

“I am very proud to be from here,” he added. “You probably never would have heard of Sidi Bouzid if the revolution had not started here. … We made a change not only in Tunis, but across the Arab world. That is something we will forever be grateful for.”