No respite for Tunisia's working women

The revolution has not been felt among Tunisia's working-class women, who work long hours in taxing jobs to provide for their families. 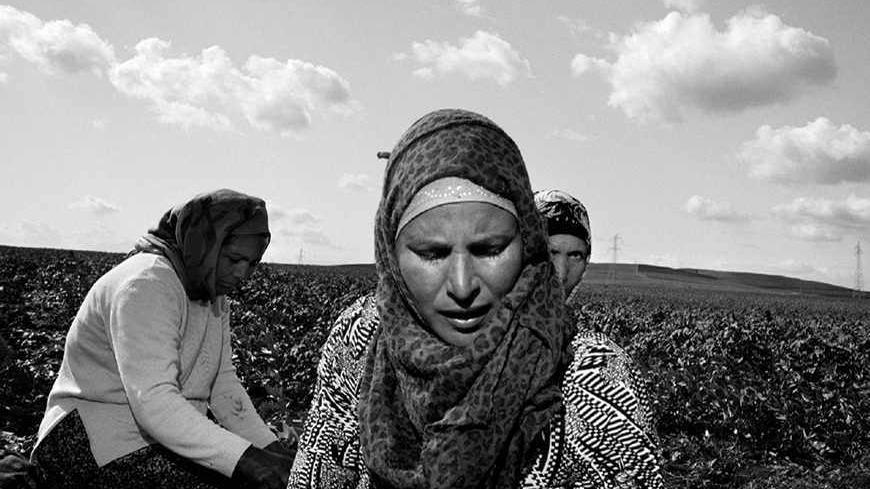 JENDOUBA, Tunisia — Hadda is not sure how old she is. Definitely between 40 and 50, but she asks her son for confirmation, and then her husband, who fetches her identity card. She does not know how to read or write. Born in 1967, she has neither left her house in the countryside nor changed her daily schedule. She wakes up at 4 a.m. to cook for her family and to take care of the house and the animals. She is then ready to climb aboard a truck belonging to Nizar, the owner of the land she works on.

Each sunrise Nizar takes 10 women to his fields. They are more or less the same age and are neighbors in the Satfura countryside, close to the city of Jendouba, in northwestern Tunisia. Each year, Hadda has to pay rent of 1,000 dinars (about $600) and financially sustain the household.

Her husband is ill and her children are unemployed, apart from Bassem who occasionally works as a bricklayer. But it is not them who give her the energy to get up every morning and then return from the fields to bake bread. Her daughter Meriem cried for days when she found out she would have to leave school — the fields and the animals were waiting for her as well.

Hadda could not bear her 13-year-old’s tears, and to ensure she is able to continue her studies, Hadda even works in the forest. Hadda is 5 feet 9 inches tall, a stature rare among Tunisian women. But even her tall build seems to be nullified when working the fields. Bent over the weeds, which are uprooted so they do not ruin the potato crop, her body seems to cancel itself out.

Only the arrival of Nizar, who comes to check the work of his two farm hands, causes her to lift her head from the ground. Eight dinars, seven hours, he says. Whilst Hadda and Fayza say seven dinars, seven hours. Less than $5 in each case. The hours that don’t bring any financial gain are those done at home, the hours in which they never once relax on their beds or sofas. In fact, they do not relax at all.

There are also entire days spent in the forests. Not where the best wood is found, though, because the most inner area is, by now, inaccessible. In fact, since last winter groups of armed terrorists have been hiding in the Ain Draham forest, as in many other Tunisian forests. Last spring they provoked various clashes and attacks in Jebel ech Chambi, near Kasserine, including the murder of nine soldiers in late July, just days after the political assassination of Mohamed Brahmi, leader of the opposition. The women, therefore, don’t venture deep into the forest. They disappear throughout the outer edges in order to collect wood, which they then carry in bundles.

The cause is the same for the women of Hay el-Nasr, a working-class area of Jendouba. Either due to the irony of destiny or the choice of the old regime’s dictator, Zine El Abidine Ben Ali, the poorest neighborhood is called "Victory Zone." The only victory one could claim would be that of the driver Ali, whose truck picks up 60 people in the morning. Each morning he arrives at 6 a.m. and the rush of women hoping to climb aboard begins. They’re hoping for a day’s work in whatever field possible in the region. There is no difference in wages between the farm workers in the hills and those in the working class neighborhood. It is always those same seven dinars to sustain the entire family.

Ali, on the other hand, collects one dinar from every woman who boards the truck. Pressed up against each other, waiting to the reach the fields, Dorsaf’s eyes stand out among the others. She’s only 16 years old and has been doing this job since she was 12. She doesn’t know what she’s missing either. No one cried with her because she’s unable to attend school. She wants only to be beside her grandmother, who took her to the fields and showed her how to grow potatoes, plant strawberries and stand up for herself against those older than her.

It’s Dorsaf’s tomatoes that arrive in the Tunisian capital, and people even come from Libya to buy produce from the Jendouba fields. Landowners and merchants, with heads held high and hands raised, ask Dorsaf her name. Perhaps they realize from her gaze — shy and nervous — that this is not where she should be, even though she has learnt her trade well. She strokes her grandmother’s hands, asking when they’re going to visit her parents.

For months, Tunisia has been experiencing a political and social crisis, linked to two political assassinations in February and July this year: Chokri Belaid and Mohamed Brahmi, leaders of the opposition, the Popular Front. The draft constitution is complete, but two years following the Constituent Assembly election the definitive text has still not been approved. For two months the government and the opposition have struggled in an exhausting match of so-called national dialogue. In the meantime, the lives of women laborers continue to be one of struggle and dedication to provide for their families.

Saida, for example, doesn’t leave the house. After the fields, only her husband awaits her at home. She asks him if she can go to work, if she can go to the market, if she can visit her neighbor. Yet in January 2011 it was Saida who, along with the others, protested in the streets of Jendouba. They were the ones who cried out for the fall of the region’s dictator, dodging tear gas and running to hide from the police. Afterward they returned to the fields, because the tomato season never ceases.

In October 2011 they went to vote. Hania slowly read each letter, one by one. She stopped practicing that skill after junior school. She looked at the letters. They arrange a name, which as she pronounced she thinks she recognized, and so she marked it with a cross. Saida, on the other hand, was accompanied there. Groups from the Islamist party Ennahda helped these women to vote for candidates. It was Oct. 23, 2011, the day before they took power.

But Hania would not let herself be bought. She has 34 or 37 years — she can never remember — and she refused the 500 dinars offered by Ennahda, even though the roof of her cabin is about to collapse and even though she sleeps under the stars with her husband and children due to the heat. When it rains it becomes unbearable, when those walls cry with rainwater and exhaustion. Her husband navigates between one cafe and another, trying to obtain a "red card" in order to benefit from public health services free of charge. Poverty has driven him insane. He wanders around — coming across his neighbors between his home and the hammam — freezing during the winter and scorching in summer, even if the quality of life is always "below zero." 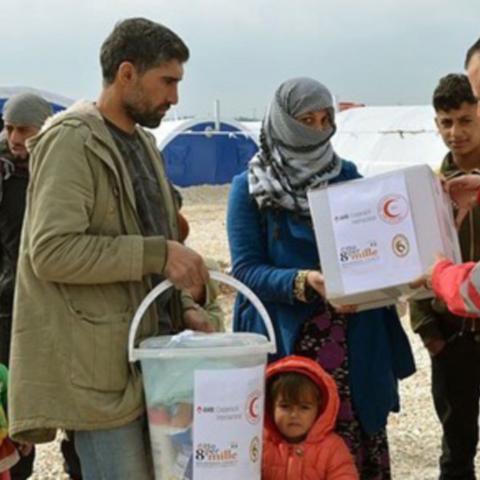 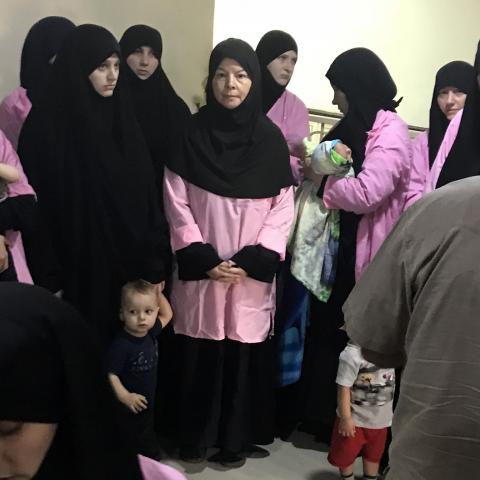