Several Palestinian groups have taken to the streets of the West Bank and Gaza to pressure Hamas and Fatah to swiftly implement the recent reconciliation agreement in light of past failures. 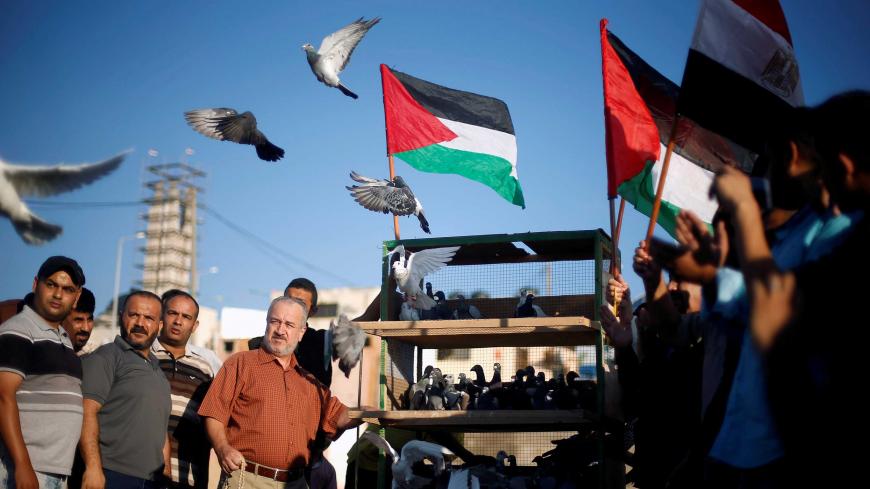 GAZA CITY, Gaza Strip — The Palestinian street is witnessing an escalating popular and trade union movement with the aim of exerting pressure on both sides of the Palestinian division — Fatah and Hamas — to speed up the implementation of the agreement reached in Cairo on Oct. 12 in anticipation of its failure. Previous agreements have failed after their implementation stalled and the parties refused to make concessions.

The popular and trade union events — in which hundreds of Palestinians participated in different areas of the West Bank and Gaza Strip — began with the dialogue sessions that started in Cairo at the end of September. The organizers of these events confirmed in separate statements to Al-Monitor that they will resume their activities in the coming days to press for the speedy implementation of the agreement.

On Oct. 10, the Popular Front for the Liberation of Palestine (PFLP) erected a tent in support of Palestinian reconciliation efforts, as participants hoped that the latest round of negotiations in Cairo, which subsequently culminated in an agreement, would be different from previous rounds of failed negotiations.

Ahmed Tannani, head of the PFLP’s Youth Movement, told Al-Monitor, “We took part in this tent and other events to pressure both sides of the Palestinian division … into reaching a final and irreversible agreement. [We seek] to prevent scenarios of previous agreements from rolling out and to allow Palestinian factions to devote themselves to confronting the Israeli occupation instead of getting carried away by internal differences.”

Tannani said the Palestinian youth in the West Bank and Gaza Strip are sick and tired of the state of division that has affected their future and deprived them of their basic rights due to the power conflict between Fatah and Hamas. The most important of these rights is the disruption of the student council elections in Gaza’s universities as well as the lack of job opportunities and development programs.

He stressed that they will continue exerting pressure on both Fatah and Hamas through such activities so the two movements quickly and seriously implement the agreement reached in Cairo. He also hoped that the agreement would be fair to all segments of society and would not serve as a means for Hamas and Fatah to share power.

In the same context, the October Movement organized a series of events in several governorates of the Gaza Strip. The movement called on the factions participating in the Cairo talks to heed the voice of the street and swiftly implement the Cairo agreement in a bid to put an end to internal division.

Muthana al-Najjar, coordinator of the October Movement, told Al-Monitor, “As soon as the factions arrived in Cairo, we took several steps to pressure them into reaching an agreement. Now that the agreement has been signed, we will embark on the second stage of our actions, which is to increase the number of grass-roots participants in order to place further pressure on both sides of the divide to implement the agreement without letting any details hinder its implementation.”

In order to increase the number of participants, the movement plans on launching social media campaigns.

Najjar explained that they received several messages from the Egyptian authorities and Palestinian parties for the dialogue table in Cairo. These messages said, “Your voice will be heeded, and what was agreed upon is irreversible” — meaning, reconciliation will be fulfilled. Najjar was referring to phone calls with Egyptian officials that he did not name.

He added that the next phase will focus on supporting the government's work in Gaza through voluntary activities and calling for the opening of the Rafah crossing for student and medical patient travels. This crossing was part of the agreement but still needs some arrangements with the Palestinian government and the Egyptian authorities due to the security situation in Sinai.

Jamal Zaqout, a member of the secretariat of the Patriots to End the Split rally, told Al-Monitor that the Palestinian street activities should help parties end division. He added that the rally will resume its popular activities and communicate with the two parties to the division in a bid to monitor what has been achieved in the recently signed Cairo reconciliation agreement.

Zaqout stressed that the conditions previously set by Hamas and Fatah hampered the rapid and safe implementation of previous agreements. He also stressed the need to involve all Palestinian factions, as well as representatives of civil society organizations and trade unions, in resolving the differences threatening the Palestinian cause instead of having those divisive parties share power alone.

When asked about the Palestinian street's ability to pressure both sides of the divide, Palestinian political analysts voiced diverging opinions.

Hani Habib, political analyst and contributor to the Palestinian al-Ayyam newspaper, told Al-Monitor that the recent escalating Palestinian popular action aims to convey a strong message to the two sides of the division, whereby the people will keep taking to the streets until there is an agreement to end more than 10 years of division, which have affected the Palestinian cause and the lives of citizens.

Habib said that the street movement, among other factors, contributed to the agreement in Cairo amid great Egyptian pressure on the Palestinians to turn the page of division. This came at a time when Hamas and Fatah were both convinced that ongoing division would cost them and the Palestinian cause more losses.

Habib further said it is unfortunate that the people’s opinion was previously met with neglect on the part of Hamas and Fatah. He pointed out that popular participation had been weak because citizens were busy making a living, but added that such participation is gradually increasing.

Mukhaimer Abu Saada, a professor of political science at Al-Azhar University in Gaza, said that while popular movements are important to pressure both sides of the divide, they have not yet served their purpose in the case of Hamas and Fatah due to the weak participation of the masses who are bored of division.

Abu Saada said that Hamas has polling stations that can gauge the Palestinian public mood through social networking sites, and these are taken into consideration to see whether or not a step, such as internal reconciliation, should be taken.

Due to the difficult living conditions and the lack of the most basic elements of human life, Palestinian popular movements, albeit limited, are a matter of concern to the two parties to the division, especially in the Gaza Strip, which is controlled by Hamas.