Palestinians in Gaza and the West Bank have launched a popular movement to push their political leaders to prioritize reconciliation and meet demands for improving life in Gaza. 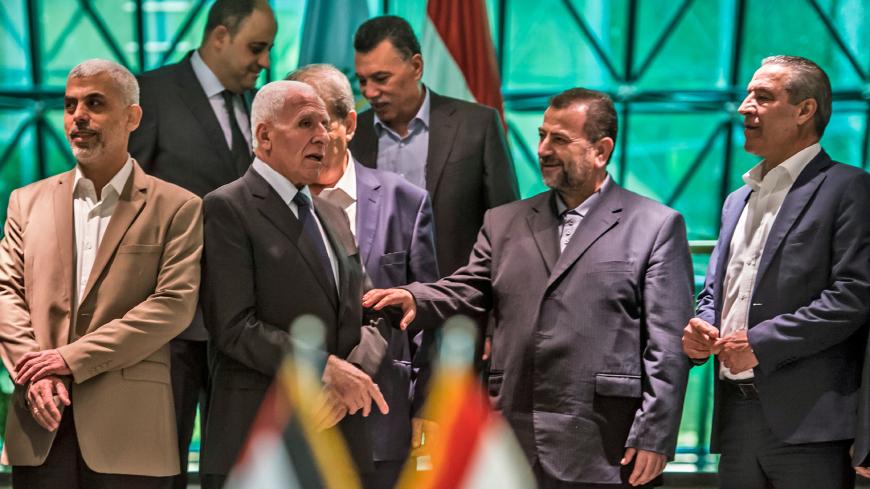 GAZA CITY, Gaza Strip — The Popular Conference to Support the Palestinian Reconciliation, End the Division and Restore National Unity convened on Nov. 18 at the Rashad al-Shawa Cultural Hall in Gaza City. At the conclusion of the gathering, mukhtars (village elders) and involved activist groups issued a document in support of Palestinian unity efforts and listing a number of demands. Eleven Palestinian factions also signed the document, with the exception of Hamas and Fatah, to whom the document was addressed.

The group Patriots to End the Split spearheaded the conference. Yussri Darwish, coordinator of the group, told Al-Monitor, “We, as Patriots to End the Split, called on Palestinian factions, tribes and civil organizations to participate in the conference. Seventeen people representing political, civil and tribal groups from the West Bank and Gaza were invited to address the conference, which is considered a first-of-its-kind popular movement in Palestine. The aim of the conference was to pressure both sides of the division — the [Palestinian Authority (PA)], represented by Fatah, and Hamas — to end the Palestinian division and achieve unity.”

Around 500 young people from Gaza attended the event along with representatives of community institutions and the Islamic Jihad, the Popular Front for the Liberation of Palestine (PFLP) and the Democratic Front for the Liberation of Palestine. The participating factions conveyed the conference’s recommendations to the 13 Palestinian factions — including Fatah, Hamas and the three aforementioned groups — scheduled to meet Nov. 21 in Cairo to further reconciliation.

The conference document contains a number of popular demands, foremost of which is ending the siege against Gaza and lifting the punitive, administrative and financial measures imposed by Palestinian President Mahmoud Abbas in response to the administrative committee established by Hamas to oversee Gaza. Conference participants also called for forming a national unity government of all Palestinian factions, merging the security services and various government ministries under the framework of a single governing administration, creating real job opportunities for Gaza’s youth and improving health and social conditions.

Darwish noted that the popular movement was manifested in two events: the conference in Gaza, held to declare the movement's launch, and a popular march in Ramallah at the same, ending in Yasser Arafat Square. The conference document was signed by participants from both the West Bank and Gaza.

According to Darwish, of the 13 factions meeting in Cairo, nine of them had members who helped found the popular movement, notably the PFLP, the DFLP, Islamic Jihad, al-Ahrar and the Popular Front for the Liberation of Palestine – General Command.

She stated, “One of the most important demands is holding comprehensive Palestinian elections for the Palestinian Legislative Council, the presidency and the Palestinian National Council (PNC) in no less than six months.”

The conference document called for reactivating the Palestine Liberation Organization (PLO) and establishing a national unity council consisting of all the Palestinian factions, including the Islamic Jihad and Hamas, which do not belong to the PLO. This would be along the lines of meetings held in January by the PNC in Beirut to establish such a council.

“During the conference, we called for a comprehensive national dialogue with the participation of all political and social forces, especially youth, women's, trade union and national figures, to review Palestinian policy since the Oslo Accords and develop a unified strategy for action,” Darwish explained.

Amer Balousha — an activist member of the preparatory committee for the conference who had been detained for a day in July by the Hamas police for criticizing the Hamas government — explained to Al-Monitor that the movement symbolized by the popular conference was founded by Palestinian youths, who have been absent from the political scene for 11 years under Hamas’ rule in Gaza.

“We seek to defend the people’s rights that were ignored by the political forces’ power struggle,” Balousha said, referring to the Hamas-Fatah split. “We want to tell the parties of the Palestinian division, and the factions gathered in Cairo, that there is a popular movement that brings together all Palestinians under its umbrella to support reconciliation and rejects any attempt at turning back and distorting or impeding the empowerment of the government. In addition, we want to pressure them into completing all the reconciliation understandings, such as merging ministries and security forces, within a specific timeline, as well as including all Palestinian factions in the decision-making process.”

Hamza Abu Jarad, a conference participant from the southern Gaza town of Rafah, told Al-Monitor, “This is my opportunity as a Palestinian youth to push for achieving Palestinian reconciliation and ending the division, under which the majority of our lives have been wasted.” He had taken part in previous events advocating an end to the Palestinian division, including protests on April 29, 2014, in Unknown Soldier Square in Gaza City, that were suppressed by Hamas police.

“There are about 200,000 unemployed graduates in Gaza who have not been able to get jobs due to the lack of opportunities, not to mention favoritism in employment during Hamas’ rule,” Abu Jarad said, adding, “After Hamas and the PA decided to seriously end the division, we had to have a say in pressuring them to take quick practical measures in this regard and restore Palestinian unity, which we consider the real opportunity for us to solve our problems of unemployment and poverty.”