Though some analysts believe joint Egyptian-Israeli military exercises won't actually take place given the Egyptian public's opposition to the idea, some Arab and Gulf countries seem to be advancing on a path toward normalization with Israel. 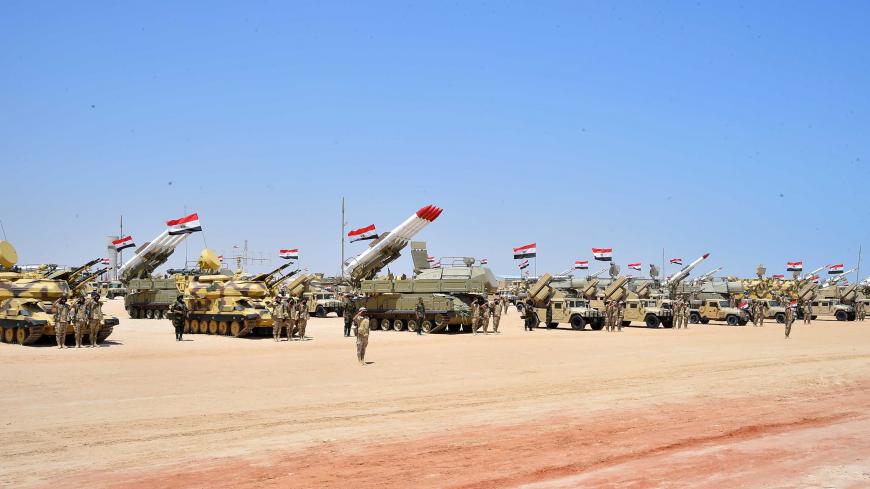 Military students stand at attention to mark the opening of the Mohammed Najib military base, the graduation of new graduates from military colleges and the celebration of the 65th anniversary of the July 23 revolution at El Hamam City in the North Coast, Marsa Matruh, Egypt, July 22, 2017. - The Egyptian Presidency/Handout via REUTERS

CAIRO — Egypt's rumored plan for a joint military exercise with Israel is raising a lot of criticism from opponents of President Abdel Fattah al-Sisi's regime.

Opposition website Egyrep.com published an article Oct. 8 that said, “Sisi breaks the armed forces’ doctrine with the first military exercise with Israel.” Al-Quds al-Arabi reported Oct. 6 that Sayyed al-Toukhi, a leader of the opposition Democratic Current Alliance, posted on Facebook that the military exercise with Israel “is a big shame on this president and all leaders who are of the same mind.”

It all started when Greece's Minister of National Defense Panos Kammenos told the press Oct. 1 that Greece is planning joint military exercises with Cyprus, Egypt and Israel.

No comment on a joint Egyptian-Israeli military exercise was posted on the official Facebook pages of the military spokesman of the armed forces or the Egyptian Defense Ministry. Nevertheless, speaking to Al-Monitor on condition of anonymity, a source close to Egypt's military establishment said, “The Egyptian military media is characterized by a high degree of transparency. The armed forces would never take part in such exercises, even if they were to be confidential, because such an event can’t be hidden. Military exercises are viewed as a major event involving the armed forces' equipment, weapons, soldiers, officers and commanders. It would be impossible for Egypt to pressure all these parties in four countries to keep such an exercise to themselves.”

Mounir Mahmoud, a researcher specializing in Israeli affairs at Al-Ahram Center for Political and Strategic Studies, told Al-Monitor that perhaps Kammenos meant that Greece plans military exercises with Israel, Egypt and Cyprus separately, or that he was referring to a Greek offer that Egypt has not agreed to yet. However, the Times of Israel ran a story about the subject under the headline "Israel to conduct joint air force drills with Greece, Cyprus, Egypt," and recent news stories have highlighted Israeli overtures to Egypt, such as Israel's condemnation Oct. 21 of a terrorist attack that killed 16 Egyptian police.

Mahmoud noted that it's possible Kammenos was sending a message to Turkey that regional powers such as Israel and Egypt are in favor of Greece's stance opposing Turkey, as Greece perceives Turkey to be stealing its right to gas in the eastern Mediterranean.

Furthermore, Israel and Greece have common interests. Israel seeks to export natural gas to Europe through pipelines crossing the Mediterranean Sea and Greece. These interests, however, do not seem enough for Israel to favor Greece, as Israel also is considering a similar project to export gas to Europe via Turkish territory.

In an Oct. 6 story, French public radio station Monte-Carlo Doualiya linked news about the possible Egyptian-Israeli joint military exercise to Sisi’s meeting with Israeli Prime Minister Benjamin Netanyahu on the sidelines of the UN General Assembly meeting in September. The same month, news surfaced that a Saudi prince secretly visited Israel the same month — news Riyadh hasn't denied. Stories also implied that such developments correlate with US President Donald Trump’s remarks on the "deal of the century" to resolve the Middle East crisis.

"The problem is that the deal’s details remain undisclosed, and the US side contented itself with the talk on Saudi-Egyptian-Israeli-Palestinian cooperation to bring about peace and stability to the region in the face of Iran," the Monte-Carlo Doualiya story said.

Speaking to Al-Monitor on condition of anonymity, an Egyptian journalist specializing in Israeli affairs said there are many indications “that Egypt and the Gulf countries are on the path toward normalization with Israel to counter the risks coming from Iran’s influence."

"These [indications] include the fact that Saudi Arabia, the UAE [United Arab Emirates] and Israel rushed to express their stances favoring Trump’s Oct. 13 remarks that he will not recertify Iran’s nuclear deal.”

The journalist said, however, that normalization wouldn't mean Arab states would cast aside their own constants, such as the Gulf countries opposing diplomatic ties with Israel or the Egyptian armed forces viewing Israel as a historic enemy. He explained that any shift in those stances could cause resentment among Gulf citizens or dissatisfaction within the Egyptian armed forces’ ranks.

It's noteworthy that many Egyptian military leaders continue to describe the Israeli army as a historic enemy. Most recently, on Oct. 13, air force commander Younes al-Masry described the Israeli army as an enemy many times during his interview with military editors of multiple newspapers on the date marking the 44th anniversary of the October 1973 war.

Mansour Wahhabi, a professor of Israeli studies at Ain Shams University in Cairo, believes there will be no joint Egyptian-Israeli military drill.

“The objective behind any military exercise is to learn about the other armies’ weaponry. While the majority of the Israeli weapons are either from Europe or the US, Egypt has in its possession many similar weapons, in addition to its Chinese and Russian weapons. This means that the Egyptian armed forces have no interest in a joint exercise, [especially given] the damage the regime would have to face due to the [negative] public opinion and perhaps the army’s rejection of further normalization," he told Al-Monitor.

Also, Wahhabi said, the economic, security and political rapprochement with Israel to counter terrorist groups doesn't mean that the Egyptian, Israeli, Turkish and Iranian armies haven't been competing to achieve military supremacy in the region. This competitiveness would make the countries loathe to unveil the power of their armies in a military drill.

That same reason is perhaps behind the absence of joint Iranian-Turkish exercises, despite the countries' trade agreements in recent years and their rapprochement under some circumstances, for instance, the issue of Iraqi Kurd's potential influence on their countries. The competition could also be behind the absence of Israeli-Turkish training exercises with US participation; such drills haven't been repeated since 2008.

There's another issue that would make it difficult for joint military drills to take place: Egypt's support for and role in a Palestinian reconciliation and Netanyahu's rejection of reconciliation, Wahhabi noted.

The long-standing Sunni-Shiite conflict has not prevented a practical rapprochement between the Sunni-dominated regime in Turkey and Shiite-dominated regime in Iran. An example of this came when the Kurds in Iraq voted for independence in September, which posed a threat to both countries. The same approach applies to Egypt and Israel, historic enemies who currently engage in mutually beneficial political, economic and security cooperation at their border. Pragmatism, however, will not be able to erase historical enmity anytime soon, let alone allow for military cooperation and joint drills.