Libyan activists team up with Al-Azhar to tackle extremism

A group of Libyan activists are working alongside Egypt’s Al-Azhar to protect religious clerics defending moderate Islam in Libya from extremist attacks. 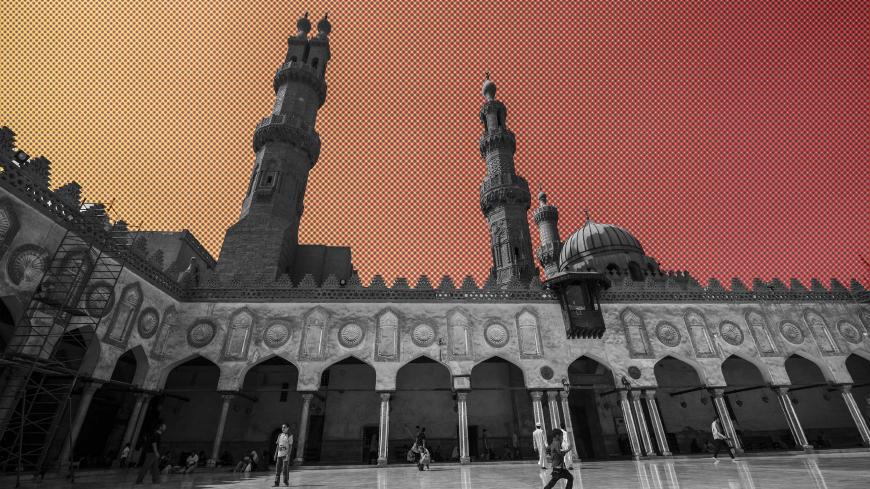 Whenever Ahmad Fathi received threatening messages on his phone warning him to stop condemning Salafi militants in his sermons, he never listened. Extremists couldn’t intimidate the young sheikh from Benghazi, Libya’s second-largest city, until they phoned him from an unknown number in April 2015.

“The caller said that militants were waiting for me in my house,” Fathi, now 27, told Al-Monitor. “I was afraid. When I arrived home, I was told to leave Libya and never come back. I packed my belongings and quickly boarded the next bus to Cairo.”

Since the overthrow of Moammar Gadhafi’s regime in 2011, militias have assassinated dozens of soldiers and civil servants from the dictator’s era. Culprits have justified the murders with religious rhetoric, compelling activists like Fathi to take a stand against extremism.

Fathi has since settled in Egypt. On Sept. 27, he was one of several Libyan activists invited to a three-day workshop in Cairo to discuss ways to denounce religious edicts that call for the death of apostates. The event is part of a larger campaign to combat extremism in Libya by promoting moderate understandings of Islam.

The project was launched in December 2016 by the Libyan Women’s Platform for Peace (LWPP) and the World Association for Al-Azhar Graduates, one of the most renowned institutions in Sunni Islam.

LWPP co-founder Zahra Langhi insists that creeping religious extremism in Libya has become a major problem. But global human rights groups, she adds, have trouble addressing the issue since most aren’t familiar with Islamic texts, making Libyan civil society vital to the cause.

“[The LWPP] does think that forging dialogue between Libyan activists and Al-Azhar sheikhs can produce alternative understandings of Islam, which can help offset the influence of extremism,” Langhi told Al-Monitor. “This is the first time that Al-Azhar has agreed to a partnership with a women’s rights association, so we think this is a major opportunity.”

Not everybody is convinced that Al-Azhar can have a significant influence in Libya. Blogger Mohammad Khalil, 37, noted that Wahhabism, a fanatic and relatively modern interpretation of Islam originating from Saudi Arabia, is propagated far more than the views of Al-Azhar sheikhs. In the last 50 years, Riyadh has invested at least $86 billion in spreading Wahhabism worldwide, according to a study released in July by the Henry Jackson Society, a British think tank.

“I think Al-Azhar lost the battle against extremism a long time ago,” Khalil told Al-Monitor. “We can’t communicate outdated ideas to Libyan people. We need to work with Al-Azhar to introduce new ideas that support democracy.”

Doing so is risky in Libya. Following the revolution, Khalil co-founded a group called Tanweer (Enlightenment), which promoted the pillars of democracy by organizing human rights seminars and cultural events in Tripoli. In December 2014, he was detained by an Islamist group that considered democracy incompatible with Islam. Lucky for him, he was released that same month after promising to leave Libya.

After Khalil settled in Tunis, Tanweer gradually disbanded as more members fled or disappeared. His close friend and fellow co-founder, Intesar al-Hasaari, was even shot dead in her car in Tripoli on Feb. 24, 2015. The murder devastated Khalil, yet he isn’t hungry for revenge like some of his peers.

“I have friends who say they believe in democracy but support the execution of extremists on the battlefield. We can’t enforce justice by way of the gun. That’s not democracy; it’s a jungle,” said Khalil.

Khalil was referring to uncritical supporters of Khalifa Hifter, a defected military commander from Gadhafi’s era who returned to launch a war against Islamists after 27 years in exile. Hifter’s self-described Libyan National Army (LNA) is a polarizing force that has been accused of committing war crimes in Libya. Just in August, the LNA executed several captured fighters in Benghazi.

Yet activists from the workshop insist that they are against all forms of extremism. So is Al-Azhar, though it risks undermining the mission if it doesn’t monitor its own practices.

In December 2014, Al-Azhar issued a statement that refused to label the Islamic State as apostates. Then, in July 2016, Imam Ahmad al-Tayeb stated that apostasy is a crime potentially punishable by death. Al-Azhar’s top clerics failed to denounce the remark from their own sheikh, damaging their reputation as a moderating voice in the region.

Langhi says that one of the aims of their partnership with Al-Azhar is to restore the relationship between prominent religious leaders and human rights defenders.

“It’s part of the [LWPP’s] regional work to train religious leaders in the domain of human rights,” she said.

“We are grateful to have access to a wider audience in Libya,” Al-Azhar Imam Khaled Omran told Al-Monitor. “We are available to answer questions from young men who are confused about Islam.”

Fathi, the young sheikh from Benghazi, is also trying to establish a religious committee in Libya that can team up with Al-Azhar. Hopefully then, he said, Libyan religious leaders will obtain greater legitimacy when denouncing extremists and an end to reprisals.

“I have full faith in Al-Azhar,” repeated Fathi. “We must work together to persuade all sides in Libya to stop the war.”