Iraq's Turkmens hope opposition to the recent Kurdish independence referendum will help them strengthen their political presence and keep the Kurds from annexing Kirkuk. 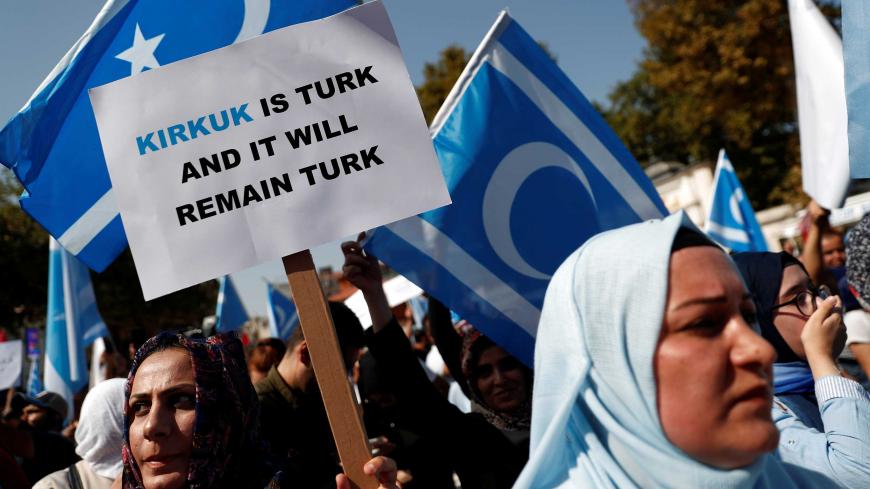 The Sept. 25 referendum, in which voters overwhelmingly voted for independence for Iraqi Kurdistan, increased the division between the Turkmen and Kurdish populations in the disputed city of Kirkuk. But Turkmens believe the Kurdish move, which raised objections from several parties, offers an opportunity to strengthen their position in Iraq.

Turkmens reported intimidation and repeated attacks on their party in Kirkuk both before and after the referendum. On Oct. 2, someone reportedly fired on the party headquarters and even lobbed a grenade at the building. Turkmen parliament member Hassan Tauran confirmed the news in a TV interview, adding, “This is the fifth attack during the week that followed the referendum.”

Turkmens strongly oppose the Kurdistan Regional Government's efforts to annex Kirkuk and other mixed-population areas, and they hold the Kurdish side responsible for the attacks. On Sept. 19, Turkmen parliament member Jassim Mohammed al-Bayati accused what he called the "gangs" of Kirkuk's Kurdish governor of kidnapping a young Turkmen.

But it is difficult to get to the truth behind these attacks amid the tension plaguing the city. Kurdish forces affiliated with the Patriotic Union of Kurdistan gained full security and military control over the city after June 2014, when the Iraqi army’s 12th division withdrew in the face of the Islamic State's overwhelming advance.

Turkmens are the third-largest ethnic group in Iraq and say they have been denied their rights since Saddam Hussein was overthrown as president in 2003. Part of the problem is the deep sectarian conflict between Sunni and Shiite Turkmens that kept them from forming unified political blocs. When the new regime based on sectarian and ethnic quotas was established in Iraq, the Turkmens lacked the political experience of the Shiites and Kurds. The Turkmens have been involved in sectarian strife in many areas, particularly in Tal Afar, reaching the point of military clashes.

“These differences have caused the Turkmens a great deal of damage in all political aspects and have negatively affected their unity in the eyes of the Iraqi, regional and international public opinion," Yahya Shemsettin, a Turkmen journalist from Kirkuk, told Al-Monitor recently.

Unlike other factions in Iraq, Turkmens haven't had armed wings in recent years and failed to carve out a clear role in Kirkuk's security. Ali Mahdi, a Turkmen member of Kirkuk's provincial council, said in an Oct. 3 TV interview, “We have been calling since 2006 for the formation of a joint force of Turkmens, Kurds and Arabs to defend Kirkuk, but the Kurds have stood against this idea.”

When it comes to foreign support, Turkey often talks about supporting Turkmens in Iraq, but in reality it doesn't do much, especially after the rapprochement between Turkish President Recep Tayyip Erdogan and KRG President Massoud Barzani.

For instance, Turkey has benefited from the Kurdistan Democratic Party forces' control of the most important oil wells in Kirkuk as well as oil exports through Turkish territory. The Turks signed a 50-year agreement with the Kurds in this regard despite objections by the Iraqi Turkmens. Most recently, the Iraqi Turkmen Coordination Council asked the central government in Baghdad on Sept. 26 to “impose full control over the oil wells in Kirkuk and give back the task of exporting oil [to Iraq's State Oil Marketing Organization], as well as provide protection to oil wells by the federal police.”

Meanwhile, Turkmens point to past political understandings between Shiite and Kurdish parties. Tauran, the Turkmen lawmaker, said Oct. 2, “The Turkmens were victims of agreements between the central government and the KRG.”

Various Turkmen parties have united in recent years to try to restore their status.

Shemsettin, the journalist, said, “After the events of 2014, the Turkmen [parliament members] began to move together and established the Iraqi Turkmen Coordination Council, which includes Shiite and Sunni figures as well as figures from various political views, all of which became unified.” He added, “The Turkmen public, elites and intellectuals are generally pleased with this move.”

Turkmen parties were also able to establish armed factions within the Popular Mobilization Units (PMU) in mixed areas such as Tuz Khormato and al-Bashir. Shiite forces such as Asaib Ahl al-Haq backed the Turkmen PMU factions to pressure the Kurds in these areas.

The central Iraqi government and the Turkish government both reject the Kurdish referendum, which Turkmens see as an opportunity to strengthen their positions in Iraq and push for greater gains. The Turkmens hope the liberation of Hawija and adjacent areas as well as pressure from the federal forces will ultimately weaken the Kurds in these areas.

After long years of division, Turkmens are trying to advance in the political game and exploit events that have weakened their Kurdish rivals. However, nothing is guaranteed in light of unpredictable events and the ever-shifting alliances in crisis-ridden Iraq.