Controversy continues over how to cut up Kirkuk

The Turkmen, the third national component of Iraq, are demanding arms to fight against the Islamic State, just like the Arabs and Kurds, but territorial squabbles are keeping the various groups at arm's length. 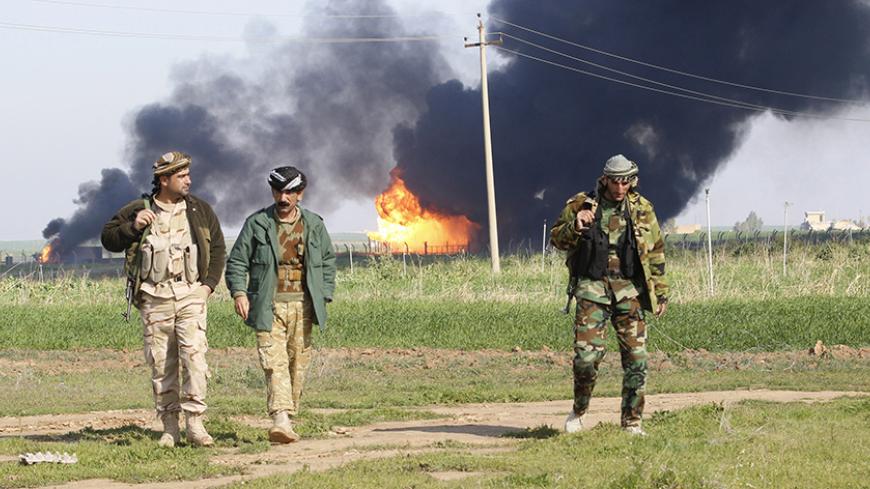 Smoke rises from the Khabbaz oil field, behind Kurdish peshmerga forces, on the outskirts of Kirkuk, Feb. 2, 2015. - REUTERS/Ako Rasheed

BAGHDAD — While the Kurds think of the oil-rich province of Kirkuk as the “Jerusalem of Kurdistan,” since the adoption of the 2005 Iraqi Constitution, the Turkmens have been calling for a special status that preserves the city’s ethnic pluralism.

However, the demands of the Turkmens — the third biggest group in Iraq after the Arabs and Kurds — are weakened by divisions within the group. Turkmens include Sunnis, Shiites and a minority of Catholics. This ideological division is crippling their performance as a distinct national group, and it was the main reason that led to the Islamic State (IS) controlling Turkmen-majority areas such as Tal Afar.

Kassem Kara, a leader of the Iraqi Turkmen Front in Tal Afar, said on June 17, 2014, that the Turkmens could not overcome their divisions and unite against IS. The Shiite Turkmens took refuge in areas controlled by Kurdish peshmerga forces while the Sunni Turkmens resorted to IS-controlled Mosul. Tal Afar turned into an example of how the Turkmens prioritize their sect over their nationality. This also applies to the Turkmens split between the central government in Baghdad and the Kurds. Such a situation will ultimately lead to their weakening and disintegration, according to Kara.

In this regard, Turkmen Front leader in Kifri Shaheen Turkmenoglu told Al-Monitor, “Playing on the division of Turkmens into Shiites, Sunnis and Christians will only lead to smashing the Turkmen nationality. First, the sectarian divide will weaken the group and lead to a split among its elites. Then the group will be dispersed and eliminated. Our story, the Turkmens', has always been about division and dispersion.”

For their part, the Turkmens argue that their lack of access to arms was the main reason behind their loss of Tal Afar and other Turkmen cities. They believe that it is their right to get arms from the parties that provide them to the central government or the Kurdistan Regional Government — such as the United States, Germany and France — to liberate the areas seized by IS and ensure their protection in the future.

Turkmen activist Mehdi Saadoun Jaafar explained this demand to Al-Monitor, saying, “Unlike the rest of the Iraqi factions and political parties, the Turkmens have no partisan militias. Meanwhile, the other Kurdish and Arab parties only think about protecting their regions. Turkmen areas have been serving since 2003 as scenes for terrorist operations, assassinations, car bombings and improvised explosive devices, among others.”

Head of the Iraqi Turkmen Front Arshad Salhi demanded in June 2014 that “the Turkmens in Iraq get their share of the military assistance approved by the House Armed Services Committee to the Iraqi government.”

He said, “This should be achieved in accordance with the consensus mechanism,” and he called on the US Department of Defense to “form a committee tasked with developing a payment mechanism for these allocations.”

The rest of the Turkmen parties shared the same demand. Also in June 2014, the Turkmeneli Party gave a statement calling for the Iraqi Ministry of Defense to “give the Turkmens their share of the US military assistance provided to Iraq, similarly to the other components, based on the mechanism of consensus, so that the Turkmens can organize themselves in a way that allows them to defend their own cities and regions against the threat of terrorist attacks.”

The Turkmen armament demands had begun as a result of concerns over attacks by IS that took control of Tal Afar, a Turkmen-majority city, and amid the threat faced by other Turkmen-majority cities such as Tuz Khormato and the threat to Kirkuk, especially after they found themselves unprotected by the Iraqi army or the peshmerga.

However, exacerbating these concerns, Turkmens were not allowed by the Kurds and the central government to form special forces to maintain their security.

In this context, head of the Turkmen Rescue Foundation Ali Akram al-Bayati told Al-Monitor, “If Iraq was divided into three Kurdish, Sunni and Shiite regions, then minorities would be excluded. Chief among these minorities are the Turkmens, who consider themselves to be the third nationality after Arabs and Kurds. Therefore, their armament demands are legitimate, like other nationalities, especially after Kirkuk fell under the full control of the Kurds, following the IS invasion of Ninevah province and its threat to invade the oil-rich province of Kirkuk.”

The Turkmen demands in Kirkuk consist of maintaining the special status of ethnic pluralism under a federal system in the disputed city, so as to ensure their rights and interests facing the Kurdish demands to annex their rich city to the Kurdistan Region.

Kirkuk, which is rich in resources and other wealth, would be a grand prix offered to any component that seizes it individually. In this regard, Turkmen writer and journalist Nermin al-Mufti told Al-Monitor, “The city has 22% of Iraq's oil and contains large amounts of natural gas, sulfur and integrated oil infrastructure. Its territory is among the most fertile Iraqi territories and is suitable for the cultivation of strategic crops such as cotton, corn, wheat and barley. The city also has natural water resources from rivers, groundwater and giant irrigation projects that were implemented during the 1950s and 1960s and started operating in the mid-80s. Therefore, the conflict over the city is in essence a wealth struggle before anything else.”

While the Turkmens are trying to overcome their divisions to unite their demands facing the Kurds and Arabs, there is also a general feeling among them that their influence in Kirkuk is decaying.

Jaafar summed this feeling up by saying, “The Turkmens do not stand a chance of being a real party to the Kurdish-Arab negotiations about the fate of the city, as the great disparity between the Turkmen residential areas and other areas in terms of construction, local government services and discrimination makes the Turkmens feel they have a secondary status beyond repair as long as the strongest party policy prevails.”