The speech delivered by Prime Minister Benjamin Netanyahu at the opening of the Knesset’s winter session indicates that being at the top for too long has impeded his ability to look down. 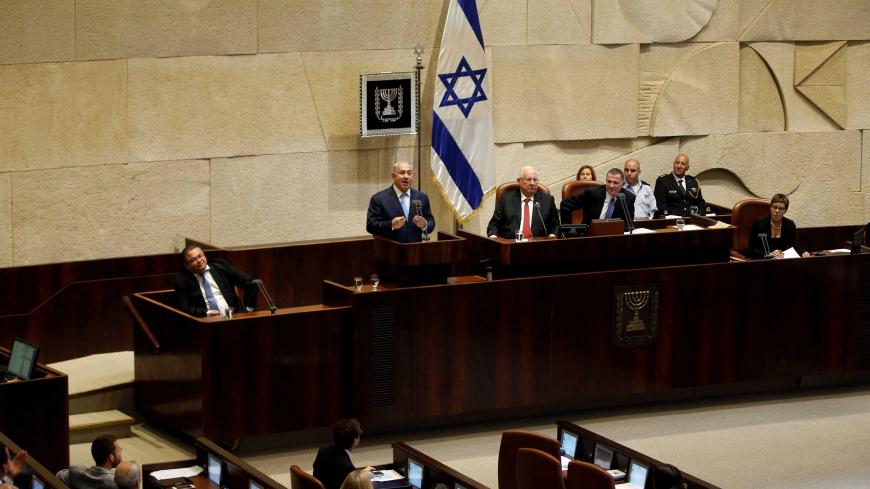 Israeli Prime Minister Benjamin Netanyahu speaks at the opening of the winter session of the Knesset, Jerusalem, Oct. 23, 2017. - REUTERS/Ronen Zvulun

In their relentless bid to defuse the stink of an initiative that would extricate Prime Minister Benjamin Netanyahu from investigations of suspected criminal wrongdoing, Likud Party members are spraying it with fake French perfume. They are trying to advance a law similar to French legislation that provides serving prime ministers with immunity from police probes. However, they forgot to mention that were Israel to adopt the French legislation in its entirety, the Netanyahu family would have been relegated long ago to their villa and swimming pool in Caesarea and penthouse in Jerusalem’s swank Rehavia neighborhood (and not the prime minister’s official Jerusalem residence), given that in France, prime ministers are limited to two terms.

Netanyahu’s fans need not look that far. They could just as well advocate for a law stipulating that a prime minister named after one of the 12 tribes of Israel (Benjamin, the son of biblical Jacob) cannot be deposed from power. This would be as good a reason as any to prevent Netanyahu from standing trial.

Netanyahu’s Oct. 23 address at the opening of the Knesset’s winter session could serve as an introductory explanation for proposed legislation limiting the terms of Israeli prime ministers. The speech shows that being at the top for too long results in a fear of heights and the incapacity to look down. That is the only explanation for the skewed depiction of reality presented by a man who has held a series of top public service posts, including four terms as prime minister.

To be fair, one should start out by saying that Netanyahu’s depiction of present-day Israel was not a total fallacy. But to quote 18th-century US statesman and scientist Benjamin Franklin, “Half a truth is often a great lie.”

Assailing his critics, whom he dubbed “sour,” for living the good life and constantly complaining about their country and leadership, Netanyahu said, “You hear conversations like, isn't the situation here horrible and terrible? Isn't everything falling apart? By the way, did you order tickets to London or Berlin?" This, from the frequent flyer who is about to board a plane for London. True, middle- and upper-class Israelis can afford to spend their vacations abroad. Also true that holiday packages to Turkish resorts are popular with lower-income Israelis who cannot afford to pay for a decent holiday getaway weekend at Israeli tourist spots in the towns of Tiberias or Eilat.

At a Knesset Finance Committee debate last June, a Bank of Israel official said that “many people take out loans to buy cars, to pay for trips, and that troubles us.” Household debt has gone up 23% in the past three years, crossing the 500 billion shekel mark ($142 billion) for the first time.

Netanyahu is also correct in touting Israel as a high-tech power. However, only 8% of the workforce enjoys the perks and high pay of such top jobs, compared with 21.7% of Israelis living under the poverty line — 1,712,900 people, among them 764,000 children, according to 2015 data compiled by the National Insurance Institute. This makes Israel the winner of the Organization for Economic Cooperation and Development (OECD) championship in poverty and inequality. And what has Netanyahu the benefactor done for all these people? In fact, Israel’s civilian expenditure for 2015 reached 39% — the lowest number registered in the past 49 years, and very much in contradiction with Israel’s needs and with the trend amid OECD member states. At the same time, government spending grew on corrupt meals ordered by the Netanyahu family for their billionaire friends. The top-flight chefs obviously made the families of tycoons Yitzhak Tshuva and Lev Leviev (who were invited to the prime minister’s residence) much happier.

On Oct. 27, when Netanyahu underwent a medical procedure, he had an opportunity to enjoy Israel’s top-notch health care system. No waiting for him to be examined by an exhausted ER doctor, an experience endured by tens of thousands of Israelis daily. Whereas on average, developed countries provide 3.7 hospital beds for every 1,000 people (not including geriatric and rehabilitation care), Israel only has 2.3, according to a comparative report published by Israel’s Ministry of Health. Israel is ranked sixth from the bottom in the number of nurses per population — 4.9 for every 1,000 people. Israel is placed last among OECD members in terms of the number of medical school students who complete their studies.

True, Israel’s roads are jammed with new cars, but Israel has the highest motor vehicle road density in the OECD. The rate of infrastructure expansion is far from catching up with the increased mileage, according to the Central Bureau of Statistics. If Netanyahu had to drive from his office on Balfour Street in Jerusalem to his villa in Caesarea, he would have to join the thousands of despondent drivers stuck in traffic daily, and he would then understand why they “make a sour face, attack and complain, and even curse,” as he complained in his speech. Netanyahu seems unable to hear his opponents' constructive criticism, born out of love to the country, internal strength and healthy understanding of the reality. His way of interpreting criticism shows weakness and disconnect from reality.

Netanyahu’s underplaying of the criminal suspicions against him also proves that his fear of falling has cut him off from real life. “In your hour of need, you pin your hopes on the recycled submarine story,” Netanyahu cried out to his critics from the Knesset podium, referring to a probe of suspected bribery in a deal for Israel to buy submarines from Germany. “You also understand that this story is going down. Three hours ago, we signed a memorandum of understanding with the German government,” he said. This is another half-truth that could soon turn out to be a total fabrication. The memorandum of understanding says Germany reserves the right to withdraw from the deal even if the investigations don’t pan out and will not take Israel’s word for it that no significant corruption had been found, but will demand an announcement to that effect from the attorney general.

“There are no submarines [to investigate], so what’s left? Cigars?” added Netanyahu, referring to other allegations against him involving accepting pricey cigars. “And if not cigars, take-away meals? And if not that, then the Israel Hayom bill,” referring to proposed legislation regarding the free newspaper published by his supporter, US gaming tycoon Sheldon Adelson.

Surely Netanyahu is aware of the fact that evidence is piling up in the offices of the attorney general and chief of police, both of whom he appointed, indicating that he and his wife are allegedly embroiled up to their necks in offenses of severe breach of trust. One should hope that Netanyahu’s only sin is lying to the public on purpose. Because the other possibility — that the fate of Israel is at the hands of a man who is driven crazy by fears of being toppled — is much more terrifying. Either way, the only article in the French law that Israel would be wise to adopt is the one limiting prime ministers to two terms. Here and now.