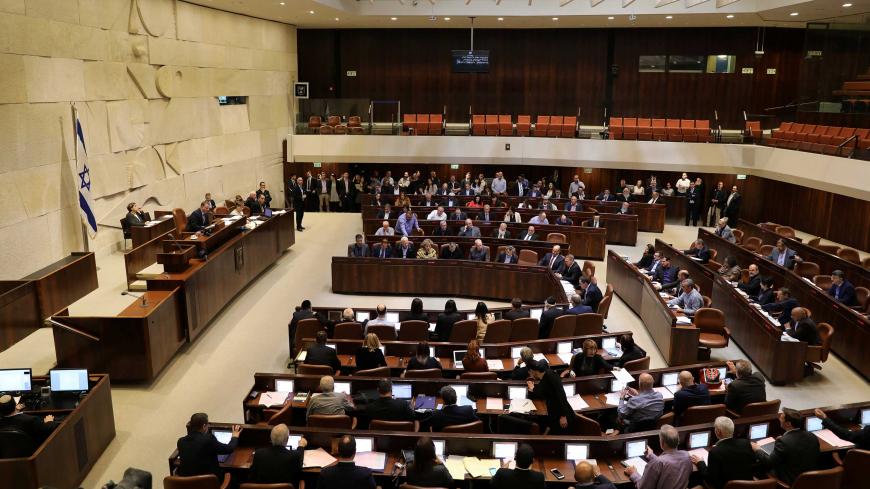 Israeli lawmakers attend a vote on a bill at the Knesset, the Israeli parliament, in Jerusalem, Feb. 6, 2017. - REUTERS/Ammar Awad

It was hard to miss Israeli Prime Minister Benjamin Netanyahu's giddiness Oct. 15 at a meeting of coalition party leaders. He was explaining to them why he is promoting the creation of a parliamentary commission of inquiry to investigate the involvement of foreign governments in funding Israeli nongovernmental organizations (NGOs) and other organizations that he claims are harmful to Israel Defense Forces (IDF) troops.

Netanyahu told the meeting that just as the US Congress is investigating Russian involvement in the 2016 US presidential elections, Israel should investigate whether other countries are involved in its internal politics.

His plan, as presented to the meeting, is to create this new committee as early as next week to coincide with the start of the Knesset's winter session, which officially opens Oct. 23. This caused a commotion among the Knesset's Likud members. Most of them would be thrilled to head this kind of parliamentary committee of inquiry. The very thought of summoning the heads of such groups as B'Tselem and Breaking the Silence to testify before them about their activities and sources of funding is enough to send a tingle down the spine of any Likud Knesset member. Every session they chair will receive extensive coverage in the Israeli media and even receive international attention.

It is hard to remember or even believe that just over six years ago, during Netanyahu's second term as prime minister (July 2011), he blocked a similar proposal to form a parliamentary committee of inquiry to investigate the sources of funding for left-wing NGOs. That proposal was submitted by Yisrael Beitenu Chairman Avigdor Liberman, who was then serving as foreign minister. Netanyahu announced that he would vote against it, explaining, "We don't need investigations in the Knesset. We don't need committees of inquiry."

But this is Netanyahu, version autumn 2017. He is being deluged by a tidal wave of criminal investigations while the right-wing government he heads has extremists in the form of HaBayit HaYehudi party members occupying positions of power. With the investigations hanging over him, he has decided to embrace his right-wing electorate, fearing that he could well lose it to HaBayit HaYehudi leader Naftali Bennett.

In the meantime, the Knesset's legal adviser, Eyal Yinon, said that such a committee, if established, would contradict basic governing principles. Talking to Al-Monitor, Coalition Chair David Bitan — Netanyahu's right hand — doesn't seem to be upset. Bitan said that Tourism Minister Yariv Levin has been instructed by Netanyahu to work on a new version of the NGO law. It is quite possible, Bitan explains, that this new formulation of the law will be sufficient.

Several months ago, Netanyahu announced that the amendment to the NGO law passed in July 2016 — and commonly known as the Transparency law — is too weak. That is why he instructed Levin to reformulate the NGO law, so that any nonprofit organization that acts against the interest of IDF troops, whether directly or indirectly, or that encourages a boycott of Israel would be shut down and prevented from operating in Israel.

If approved, this new version of the law is expected to set off an international furor, especially given the harsh responses in Europe and the United States to the law's earlier iteration as the Transparency law. That law determined that NGOs whose primary sources of funding are foreign governments must report that to Israeli authorities.

It is not just the new NGO law that will make this a particularly challenging and turbulent winter session. The Knesset will also be debating the Greater Jerusalem and Nationality laws, two pieces of nationalist legislation that Netanyahu is promoting personally. Here too, Netanyahu has eagerly embraced existing legislative initiatives originally initiated by other Knesset members. The Nationality law was first proposed by Knesset member Avi Dichter, while the Greater Jerusalem law was first proposed by Transportation Minister Yisrael Katz. Knesset member Bitan told Al-Monitor that he was instructed by Netanyahu to prioritize these two laws in order to ensure that they are passed in the very near future.

The Greater Jerusalem law would impose Jerusalem's municipal authority also over some West Bank settlements that are adjacent to Jerusalem, including the Etzion bloc settlements. Its purpose is to expand the city's municipal boundaries and bolster its Jewish majority. The message is clear. The law is intended to establish Jerusalem's status as indivisible and to stymie the two-state solution proposed by the political center and left.

"It is time to restore Jerusalem's standing and strength as the eternal capital of Israel. We have an obligation to advance the steps necessary to strengthen Jerusalem. The capital's municipal boundaries will be extended to encompass other settlements while maintaining their municipal autonomy," Knesset member Yoav Kish (of Likud), who was chosen to submit the new law once the Knesset's winter session opens, told Al-Monitor.

The Nationality law is the flagship legislative effort of a series of laws that could well be described as the National Dignity laws. This controversial piece of legislation contains elements that conflict with the principle of equality as laid out in the 1948 Declaration of Independence by infringing on the status of Israel's Arab population. A special committee headed by Likud Knesset member Amir Ohana has been hard at work over the past few weeks drafting a final version of the law, which is described by Meretz and the Joint List of predominately Arab parties as volatile and racist.

Apart from all these laws, the Likud is also promoting a piece of legislation proposed by Knesset member David Amsalem that would prevent a prime minister from being investigated by the authorities while he is still in office. Bitan claims that this law has nothing to do with the current criminal investigations into Netanyahu's dealings. According to him, the law is intended to ensure governability and cannot be applied to Netanyahu retroactively. Yet despite this explanation, it is impossible to ignore the law's timing and context. In an attempt to make this bitter pill easier to swallow, Bitan is also promoting new legislation to limit a prime minister to two terms or eight years in office.

In a conversation with Al-Monitor, Bitan estimated that the winter session will be especially turbulent and difficult. Nevertheless, despite all that, Bitan said the coalition will get through it "because no one wants elections. If we do get through it, there will be nothing to stop this government from surviving for another two years and completing a full term."

Meanwhile, Netanyahu isn't resting on his laurels. Instead, he is preparing for the next election. With the help of Bitan, he is advancing the kind of nationalist legislation that he believes will be a major component of the Likud's election campaign and his personal efforts to win another term. To this effect, he plans to present himself as the kind of strong leader who is concerned about national, Jewish and Israeli dignity all around the world.