Justice Minister Ayelet Shaked's transparency bill is actually aimed at delegitimizing left-wing NGOs and damaging their ability to operate, and helps her score points with her supporters as well, as these NGOs by law already have to submit the requested data. 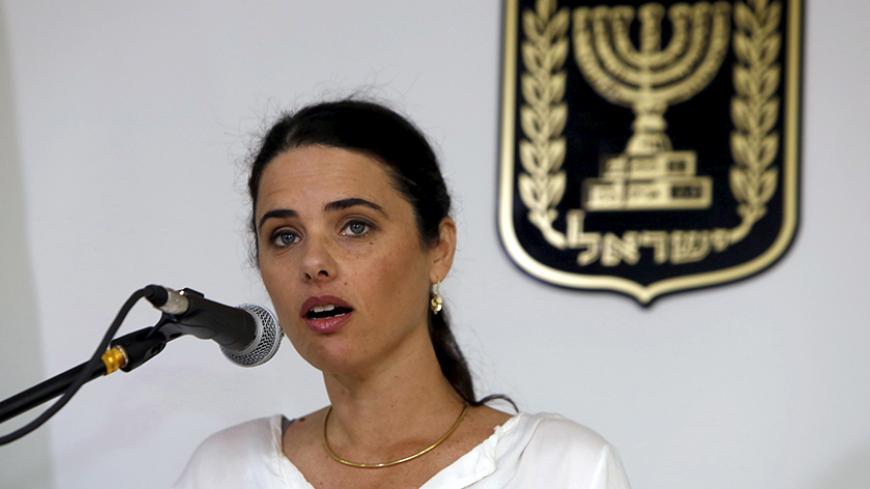 Ayelet Shaked, Israel's justice minister of the far-right Jewish Home party, speaks during a ceremony at the Justice Ministry in Jerusalem, May 17, 2015. - REUTERS/Gali Tibbon

Minister of Justice Ayelet Shaked of HaBayit HaYehudi scored a personal and electoral victory Nov. 1 when she released what she calls the "Transparency Law," a proposed piece of legislation intended to require Israeli nongovernmental organizations to reveal to the public whether they receive financial support from foreign states. Among the measures proposed to enforce this law is a requirement that representatives of these NGOs wear a special tag displaying the name of their organization when visiting the Knesset.

It was hardly by chance that Shaked chose to include the word “transparency” when coming up with a name for her new law. Borrowed from the social protest movement, the term has the positive connotation of orderly government among the public. In fact, it is little more than a cynical attempt to whitewash a law intended to further existing efforts to delegitimize left-wing NGOs — and the left in general — throughout Israel. Though the law makes no mention of the word “left” per se, it doesn’t have to. In Israel today, the situation is such that many left-wing NGOs that support finding ways to resolve the Palestinian issue receive funding from foreign governments, mainly from Western Europe and the United States. In contrast, right-wing NGOs usually tend to receive contributions from private individuals. These latter donations are not covered by the proposed law.

Since Shaked wants to brand left-wing groups with a “mark of Cain” of sorts, a far more appropriate name for her proposed piece of populist legislation could be the “Selection Law,” a reference to the way Jews were marked to distinguish them from other Europeans during World War II in Nazi camps. The justice minister never even considered postponing her efforts to advance this provocative and divisive piece of legislation so that it would not coincide with the 20th anniversary of Prime Minister Yitzhak Rabin’s assassination on Nov. 4, 1995. Instead, she decided to fire it off like a poison dart, right at the heart of Israeli democracy. Even if the bill doesn’t eventually pass, the damage has already been done through the aggressive attacks against left-wing NGOs, provoked by the publication of the proposed law. Representatives of these NGOs were quick to condemn the law and to defend themselves on major media outlets, while the right is accusing them of one of the worst imaginable charges against public officials in the current climate: of being against “transparency.”

This is not the first time that Shaked has tried to advance legislation targeting left-wing organizations. She did it in the previous Knesset, when she was just a regular member of the parliament, proposing two similar laws together with Knesset member Robert Ilatov of the Yisrael Beitenu party (then in the coalition). The first of these laws was intended to impose a special tax on left-wing organizations funded by foreign governments. Fortunately, the law failed to get anywhere, due to the opposition of Knesset members from then-coalition parties Yesh Atid and Hatnua. Nevertheless, when that law failed, Shaked, who began her political career with HaBayit HaYehudi Chair Naftali Bennett as a co-founder of the extra-parliamentary right-wing “My Israel” movement, submitted a similar proposal again. This second proposal also failed, together with the previous government.

Now that she is the minister of justice, chair of the Ministerial Committee on Legislation and a major figure in Benjamin Netanyahu’s right-wing government, Shaked is trying again, for a third time. This time, however, her chances of succeeding are good. This government has no gatekeepers such as former Hatnua leader Tzipi Livni and Yesh Atid leader Yair Lapid, nor are there any liberal Likud ministers such as Dan Meridor or Benny Begin. In other words, there is no one to stop the Transparency Law from sending Israel spiraling even further toward democracy’s red line.

The law was first proposed by Knesset member Betzalel Smotrich of the HaBayit HaYehudi party about two months ago. By giving the law her backing, Shaked has effectively upgraded its status and transformed it into an official piece of government-sponsored legislation. This means that it does not have to get past the hurdle of an initial vote in the Knesset and other bureaucratic obstacles. Furthermore, the proposed law is expected to benefit from an automatic majority in the Knesset due to the support of the coalition.

The proposed law is intended to increase transparency surrounding the activities of NGOs and other groups benefiting the public, who receive most of their funding, i.e., over half of their budgets, from donations made by foreign governments. According to the proposed law, such an organization will be obligated to note the source of its funding in all of its publications and reports that are available to the public. Similarly, every time the group approaches an elected official, it will be required to mention this foreign funding. Furthermore, as aforementioned when visiting the Knesset, representatives of the organization will be required to wear a special ID badge, noting their name and the name of the group that they represent. According to the proposed law, organizations that violate any of the above will be subject to a 30,000 Israeli shekel fine (about $7,700).

Shaked claims that the financial support that foreign governments offer NGOs operating internally within the country undermines the sovereignty and character of the State of Israel and challenges the authority of its elected government. According to her, as quoted in Israel Hayom newspaper, “We saw how the report from the UN into [2014] Operation 'Protective Edge,' accusing Israel of committing war crimes and intentionally harming civilians, was based on key testimonies by Israeli NGOs such as B’Tselem, Breaking the Silence and Adallah.”

Shaked could hardly have been surprised by the uproar that the proposed law evoked. When a picture of a yellow Star of David with the word “leftist” written on it appeared on social networks, she jumped on the opportunity as if it were a godsend. She responded mockingly on her Facebook page, “Transparency about the gas pipeline and votes in the Ministerial Committee: yes. Transparency about the involvement of foreign governments in the internal affairs of the State of Israel: no. The left likes some kinds of transparency but hates others. Some kinds of incitement are prohibited, while other kinds of incitement are permissible.”

The aggressive way that critics of the law lashed out against it only helped Shaked evade the need to give real answers to hard questions. Why, for example, is it necessary to mark lobbyists from left-wing groups with a special tag when they visit the Knesset, since all lobbyists are already tagged in the Knesset? More generally, the whole issue of transparency is intentionally deceptive. Every Israeli NGO, including B’Tselem, is required by law to report the sources of its funding and must submit a list of donors to both the Registrar of Non-Governmental Organizations and the State Comptroller. Furthermore, those same foreign governments also donate to Israel in order to support research, the sciences, hospitals and libraries. The inevitable question then is: When does Israel show interest in that money, and when does it not?

There is no other way to describe this law than as a political persecution — a McCarthy-style brutal, ugly and wild persecution that is reminiscent of regimes best forgotten. Shaked’s proposal not only targets left-wing organizations, but the left as a whole. The law that she is proposing is not meant to protect Israel from the involvement of foreign governments in its internal affairs. It is simply intended to protect the right. By advancing this law, Shaked has already scored points with the extreme right. Unfortunately, there isn’t a single minister in this entire government who will do what it takes to stop her.