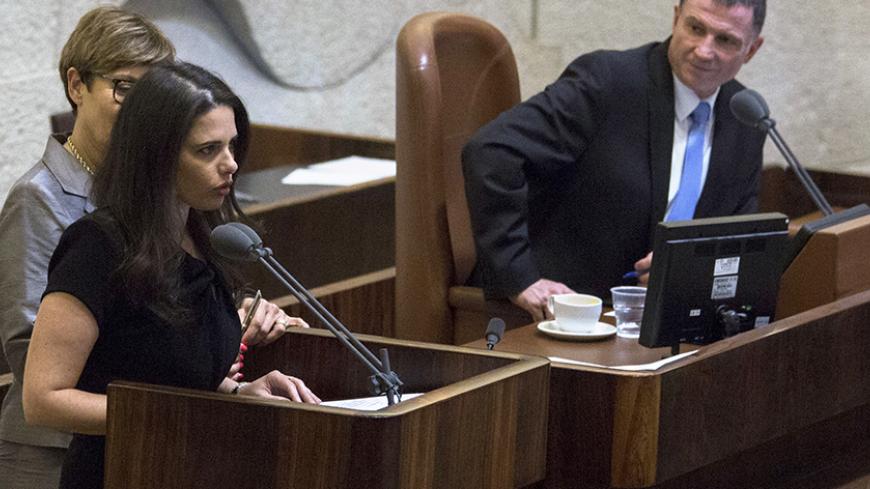 Israeli lawmaker Ayelet Shaked (L), from the ultranationalist Jewish Home party, is sworn in as justice minister at parliament in Jerusalem, May 14, 2015. - REUETRS/Jim Hollander

At the end of 2011, under strong pressure from the European Union, Prime Minister Benjamin Netanyahu blocked legislation designed to limit funding to human rights organizations in Israel. Justice Minister Ayelet Shaked of HaBayit HaYehudi, who has for years been spearheading a campaign against these organizations, recently found solace in the so-called transparency bill.

Under her legislative proposal, representatives of a nonprofit organization (NGO) funded mostly by “foreign state entities” would be required to wear an identification tag displaying their name and that of their organization when visiting the Knesset. When writing to a public official, the representatives would be required to note that their group receives foreign funding and detail its sources. Representatives caught in Knesset hallways without a tag would be fined 29,000 shekels (about $7,400). “The transparency law will guard against blatant interference by foreign states in Israeli public life,” the minister wrote on her website. She also stated, “The public and its representatives have a right to know who is stirring the pot [meddling in their business].”

Shaked, a member of a party whose top leaders are mostly religious Jews, undoubtedly knows the famous saying of the Jewish sages, “Practice what you preach” (Talmud, Hagiga 14:2). Therefore, let her, with all due respect, attach an identification tag to her shirt as well, so the public will know who is stirring her pot.

True, Shaked and her friends on the right do not enjoy the support of foreign states, which prefer instead to help organizations fighting for transparency under the occupation. Who gets to declare, however, that the money of a foreign state constitutes “blatant interference,” whereas the money of a foreign organization or person constitutes humanitarian assistance? What is the difference between the EU's support for Peace Now, an organization that exposes unauthorized outposts in the West Bank, and a donation by American Jews or evangelists to support the outposts? We will return to this issue later. First, let us examine the transparency of the foreign donations made to Shaked herself and to her partners in the struggle against the left-wing NGOs.

An investigative article published Nov. 2 by the Molad Center for the Renewal of Israeli Democracy reveals that among her campaign contributors in 2013 was one Serge Muller. His name also appears on a list of campaign contributions to Internal Security Minister Gilad Erdan, in charge of the national police, and Tourism Minister Yariv Levin. The same Muller is under suspicion in a number of international criminal investigations of worldwide drug and weapons dealing.

Muller, who is Jewish, is suspected of meeting with representatives of drug cartels in Chile and with a representative of FARC, the Colombian guerrilla group responsible for hundreds of kidnappings, assassinations and terror attacks and for supposedly supplying about half the world's cocaine. This year, INTERPOL issued a Red Notice seeking his arrest for drug trafficking, money laundering and contacts with crime and terror organizations. Muller is currently under arrest in Montenegro, awaiting extradition to Belgium, his home country.

The Muller contributions to Shaked and her friends on the right are dubious, of suspected criminal origin, but they are small change. Israeli campaign finance law does not allow them to take more than NIS 11,000 (about $2,800) from him. The big money, dubious in terms of its national-religious provenance, streams in from Christian missionary sources. In recent years, evangelical organizations abroad have funneled tens of millions of dollars to support projects in the settlements, from public buildings and protective gear to dairy production plants and water reservoirs. Activists from these organizations volunteer to do farm work in the settlements and outposts.

The blatant interference by these organizations in Israeli public life not only does not bother Shaked, the justice minister even promotes them. According to the Molad report, in October 2014 she was among the guests of honor at an international festival for Christian pilgrims. During the event, Israel Defense Forces paratroopers and soldiers from the Maglan (special forces) unit and the Druze battalion took to the stage, waving Israeli flags. Above them hung a giant sign that read “Restoration,” a key element in evangelist theology, referring to the Resurrection of Jesus and the return of the Jews to the arms of the Lord through their religious conversion. Political interference? Of course not.

News of the event does not appear on Shaked's Facebook page, which is updated on a daily basis. Obviously Shaked did not want members of HaBayit HaYehudi to know that she sits among members of an organization headed by the preacher John Hagee, who stated in the past that “Hitler was fulfilling God’s will.” This did not prevent Prime Minister Netanyahu from declaring to the group’s members in March 2012, “We are witnessing a dramatic change in relations between Christians and Jews, which now focus on the common values and our common future.”

Liat Schlesinger, who conducted Molad's investigative report, further wrote, “The Knesset has long been a focal point of vibrant evangelist activity, at the center of which is the Christian Allies Caucus.” According to her, the Knesset lobby is backed by a foreign, Washington-based organization, the Israel Allies Foundation, which has created total synergy between itself and the formal lobby. It makes unauthorized use of official Israeli emblems and thus enjoys the appearance of an official Knesset organ. According to the report, the foundation and other organizations often fly Knesset members on long trips to exotic overseas locations. Some of the Israeli parliamentarians, all of them on the political right, also benefit from contributions by the churches that fly them abroad. The legislators are not ungrateful. They cut through red tape for the churches and help them raise funds. Thus, for example, the state granted an extensive plot of land near the Sea of Galilee to a missionary church without a tender or appropriate authorizations.

There is no doubt that transparency is an important value, but the value of equality before the law is more important. In a society that presumes to be democratic, everyone should have the same tag, regardless of religion, faith and origin: A tag for citizens who are helped by foreign taxpayers to promote their ideology, requires a tag for politicians who benefit from the funding of foreign churches. The transparency law, which only reflects the tyranny of extremists who rule the coalition, belongs in the Knesset’s rubbish bin.