Why the Israeli right wants to ban books, persecute NGOs

Israeli Justice Minister Ayelet Shaked says funding by European states to NGOs advances foreign interests; yet millions of euros have also been transferred from the EU to Israeli government agencies. 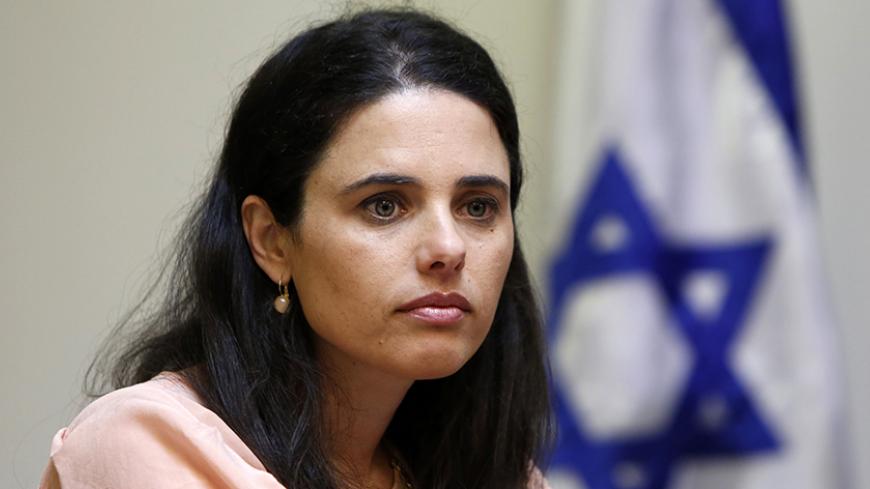 Israeli Knesset member Ayelet Shaked is seen during negotiations with the Likud Party at the Knesset in Jerusalem, May 6, 2015. - GALI TIBBON/AFP/Getty Images

There does not appear to be any connection between the decision by the Education Ministry headed by Naftali Bennett to ban the book “Borderlife” by Dorit Rabinyan from high school curricula and the Transparency Bill, which tags nongovernmental organizations that receive funding from overseas when they visit the Knesset or publish reports, being promoted by his party colleague Justice Minister Ayelet Shaked. In fact, the banning of a literary work and the harassment of human rights groups dedicated to scrutiny of the state are two peas in the same pod. Bennett is worried that a love story between an Arab and a Jewess threatens the purity of the Jewish race. Shaked is worried that organizations such as Breaking the Silence threaten the purity of the Jewish occupation. Works like “Borderlife” remove barriers between Jews and Arabs by promoting the view that all men are created in the image of God. That is why such works hurt the political interests of Bennett and his friends to shape voters in their image, because to do that they must uproot any hint — even a literary one — that advances dialogue and coexistence between the two people based on equality.

In response to the criticism of the Transparency Bill, Shaked quoted former US Secretary of State Henry Kissinger, who said, “America has no permanent friends or enemies, only interests.” Therefore, Shaked argues, Europe would not support Israeli entities for no reason, simply out of friendship. She believes the proposed legislation “labels the foreign interest of various countries in the world that wish to operate NGOs here and funnel hundreds of millions of shekels to them for that purpose.” Among those organizations are those that are interested in promoting coexistence between Jews and Arabs living in Israel.

The list of NGOs receiving funds from foreign governments will not include organizations affiliated with the right or its ideology. Enlightened countries do not encourage entities that support the occupation of another people, the Jerusalem Temple reconstruction or discrimination on the basis of religion and nationality. Nevertheless, according to an official European Union document made public by Al-Monitor, if one is to tag people and entities receiving millions of shekels from “foreign interests,” it is only fitting that Prime Minister Benjamin Netanyahu and Environmental Protection Minister Avi Gabai receive tags as well. Former President Shimon Peres also deserves a “Shaked tag.” It turns out that even the Ministry of Agriculture and Rural Development, headed by Minister Uri Ariel, a member of Shaked’s party (HaBayit HaYehudi), is committing the sin of accepting money from a foreign entity. And not just any foreign entity — a European government.

Among the bodies mentioned in the document is the Central Bureau of Statistics (CBS) — an independent agency in the prime minister’s office — which received 1.2 million euros in 2015 from the government of an EU member state. The money, provided by the government of Denmark, was designed to help the CBS “improve the quality of official statistics.”

The Cameron Veterinary Institute in the Ministry of Agriculture was given a contribution by the German taxpayer of 1.03 million euros. And what was the real reason for the generous grant of 2.08 million euros that Germany gave the Ministry of Environmental Protection? The document states that the funds are meant for “upgrading of regulatory tools and improving the environment for the inhabitants of the state.”

Germany’s interests also lie in its support for Comet-ME that helps Palestinians living in West Bank Area C (under complete Israeli control) enjoy such luxuries as electricity, and health and education services. The Israeli Civil Administration claims that the solar panels funded by Comet-ME were built for the Palestinians in the Hebron Hills without authorization and issued an order for their demolition. The Israeli interest, according to HaBayit HaYehudi, is to make the lives of the Palestinians miserable until they pack their bags and leave Area C for good, enabling the annexation to Israel of 60% of the area of the West Bank. Thus, it is clear that Germany, which wishes to slightly improve quality of life, is “tainted” by having a “foreign interest.” It is therefore only fitting that anyone touching the German funds be required to bear that same badge of shame, without exception, including the minister of defense and military chief of staff, too, for signing the submarine deal with Germany.

The European document reveals that the Peres Center for Peace is also sinning by accepting money from the EU. In 2015, the center received some 500,000 euros from the EU to support Israeli-Palestinian cooperation in the medical field. Even the national religious Bar-Ilan University is tainted by EU funding. In 2014, it received 240,000 euros for a project advancing the rights of women in Israel. The Knesset ushers should check whether former President Shimon Peres and the president of Bar-Ilan University are sporting the Shaked tag on their lapels.

The US administration, Israel’s great friend, is not content with providing $3 billion in annual defense assistance. The US Agency of International Development supports, for instance, Sadaka Reut Arab-Jewish Youth Partnership, an organization that boasts that more than 5,000 Palestinian and Jewish youths from 20 Israeli communities have participated over the past decade in a project that brings together Jewish and Palestinian teens, encouraging them to form political and social partnerships. For these youths, a romantic liaison is obviously the next stop.

Hunting down human rights organizations and NGOs dedicated to scrutiny and censoring books damages Israel's reputation as a liberal democracy. These initiatives harm the interests of the state, but at the same time also fail to accomplish the goals of Shaked and Bennett. The tagging decree has actually increased the reputation of those NGOs that promote universal values, and has not deterred their foreign contributors. On the contrary. Similarly, the extensive coverage given to the banning of “Borderlife” — yes, abroad as well — actually increased sales manifold.

On the other hand — and this is the decisive element in the Israeli political scene of 2016 — social networks and talkbacks are flooded with positive reactions to both moves by the government. The same is true for other anti-democratic moves that the Israeli government is currently contemplating.