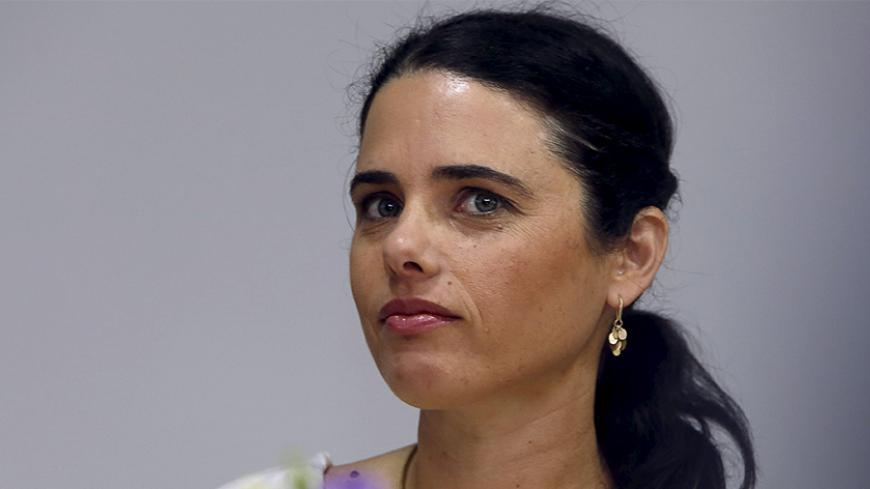 Ayelet Shaked, Israel's justice minister from the far-right Jewish Home party, attends a ceremony at the Justice Ministry in Jerusalem, May 17, 2015. - REUTERS/Gali Tibbon

Justice Minister Ayelet Shaked is a clever and skillful politician who knows how to use the media to her advantage. That is why when two Hebrew University professors posted defamatory remarks about her on Facebook in protest of her transparency law, she was able to use it to her own advantage. She suddenly went from the target of stinging criticism to the victim of a violent public assault.

The way that these two professors chose to protest Shaked and her law is indicative of their flawed sense of discretion. The language that they used was intolerable. A lecturer of political science cannot allow himself to call the justice minister “neo-Nazi scum,” as Ofir Cassif did, when he accused Shaked of contributing to “turning Israel fascist.” Cassif wrote this while sharing another Facebook post, this one by the Amiram Goldblum a professor for the Jerusalem-based university’s School of Pharmacology, declaring that Shaked’s “hands were bloodied.” Goldblum went on to claim that the Belgian Jewish businessman Serge Muller, who contributed to Shaked’s campaign in HaBayit HaYehudi’s primaries, “sold guns to murderers in Sierra Leone and the drug cartel in Colombia.”

On Dec. 27, the Ministerial Committee on Legislation approved Shaked's proposed law requiring representatives of nongovernmental organizations that rely on funding from foreign governments to wear a special tag noting the source of their funding whenever they visit the Knesset. Shaked’s bill would require NGOs that receive more than half their funding from overseas to note this in all their reports intended for or available to the public. Furthermore, whenever they approach an elected official or participate in a discussion in which minutes are taken, the representatives of these organizations would be required to state that they receive funding from a foreign state. Failure to meet any of these conditions would result in a fine of 29,000 shekels (about $7,500).

These NGOs claim that the sole purpose of this law is to obstruct their activities. The organizations that stand to be hurt if this law passes include Breaking the Silence and B’Tselem, which scrutinize and at times criticize either the Israeli side or failures to protect Palestinians' human rights.

It is easy to understand the lecturers' frustration as one of the most cynical laws ever considered by the Knesset makes its way through the various stages of legislation. The law itself reeks of a political witch hunt against anyone who dares to criticize or threaten the rule of the right. Nor is this the first time that Shaked has tried to pass a law like this. She tried twice before, as a run-of-the-mill Knesset member. Now that she is justice minister, she may finally be able to check this law off of her to-do list, something that will certainly earn her points among her electorate.

The two lecturers' big mistake was playing right into Shaked’s hands. Instead of using appropriate, acceptable means of protest, they got dragged into a very lowbrow and provocative debate. Shaked rushed to the police to complain that they had engaged in incitement against her, saying, “The delicate line between the freedom of expression and the freedom of incitement was crossed today, which pollutes public discourse and social media.” Her close ally, HaBayit HaYehudi Chairman and Education Minister Naftali Bennett, called the president of the Hebrew University, Menachem Ben Sasson, and demanded a sharp response to these attacks. As he put it, “This is the gravest incitement done against a justice minister in the State of Israel's history.”

Opposition leaders Isaac Herzog from the Zionist Camp and Yesh Atid head Yair Lapid also expressed their shock at the comments. Within a day of the proposed law’s approval by the Ministerial Committee, the debate shifted from the law itself to the tone of the critical discourse surrounding it. The protests that these two lecturers tried to arouse ultimately failed, and the entire debate is now focused on claims of incitement against Shaked. Instead of focusing on the serious questions surrounding the McCarthyist law that she initiated, Shaked has seized the new role of sermonizing against this kind of incitement.

Though Shaked called her legislative initiative the “transparency law,” the “Hypocrisy Law” would probably be a better name for it. In interviews with Shaked and on Facebook, she explained that the law “doesn’t mark people and doesn’t mark organizations. It marks the foreign interests of various countries around the world, which want to use NGOs here for their own advantage and therefore stream hundreds of millions of shekels to them.” What's hard to find are real responses to the claim that the law’s true intent was to harm watchdog organizations and human rights groups whose work is mistakenly regarded as important only to the left. One serious charge against the law is that since representatives of NGOs are already required to wear a badge whenever they visit the Knesset, it seems that Shaked's real intent is to stain their reputation with the “mark of Cain.”

Shaked also responded to criticism by the European Union’s Ambassador to Israel Lars Faaborg-Andersen, who argued that the law is a blow to democracy.

“I want to assure the ambassador,” she said, “and to promise him that the proposed law in no way harms freedom of expression. Actually, the involvement of foreign governments in the policies of other countries is the real threat to democracy. It is inconceivable that the European Union would contribute to NGOs that operate in the name of the State of Israel, when those same NGOs actually serve as a tool of foreign governments to implement their own policies.”

Shaked’s response here is just as problematic. Foreign states contribute quite a bit to Israel. One frequently mentioned example is the submarines that the Israeli navy is receiving from Germany. Why does Shaked find gifts of this sort moral and democratic? They also constitute significant funding from a foreign donor. And what about private donors from overseas? Can’t they use Israeli organizations and politicians to advance their private interests, even when they are not wholly aligned with those of the state?

Despite what Shaked said, the law that she initiated will not contribute one iota to Israel’s resilience. Rather, it constitutes another blow to Israel’s already vulnerable international standing. It is just too bad that in their efforts to ensure that the issue was on the agenda, the two professors from the Hebrew University only deflected the focus from this very important debate.