The gatekeeper of Israeli democracy and rule of law

Deputy Attorney General Dina Zilber has drawn fire from Justice Minister Ayelet Shaket and the right by daring to criticize the government’s ‘loyalty in culture’ law and in the process publicly defending Israel's legal system against further weakening. 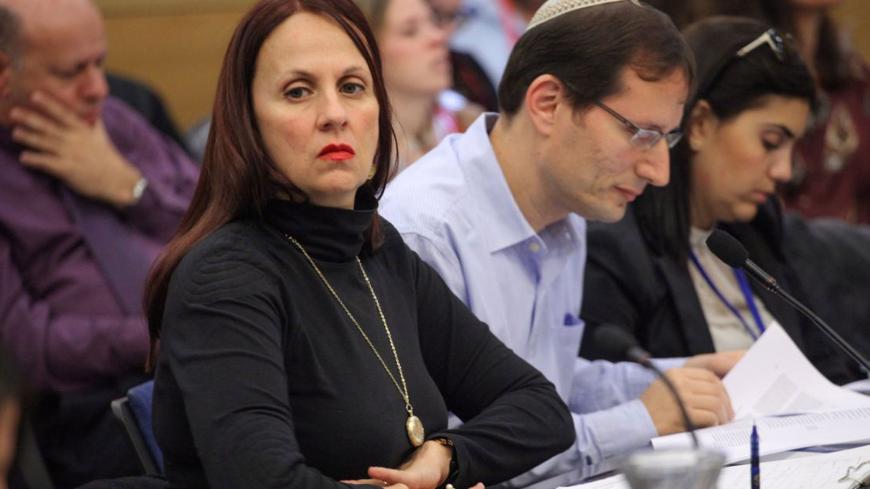 The Knesset's Education and Culture Committee held a session on Nov. 6 on the “loyalty in culture” law, which would allow the culture minister to defund programs deemed to reject Israel’s symbols. Before the Knesset's second and third readings of the bill, Deputy Attorney General Dina Zilber had the opportunity to address the committee, delivering a carefully crafted speech that the media dubbed “The Country Has Changed.” It was, in fact, a social, political and legal manifesto against the government. More than a simple legal opinion expressing reservations about Culture Minister Miri Regev’s proposed law, Zilber’s address was intended to send shock waves through the system, to protest the government and to feature on the media’s agenda.

Zilber has prior experience with events like this. She was therefore fully aware that her remarks would be filmed and otherwise recorded. With her statement, she appeared to want her admonition to reverberate beyond the Knesset committee’s chambers.

“These are not easy times,” she said, delivering her lucid message in a soft, stable voice. “They bring with them not just new laws, but even new words: governance, loyalty, overriding. We see confrontational dialogue, the wounding and scarring of our shared social fabric, labeling and branding — who is for us and who is against us.”

The debate in which Zilber participated took place one day after the Knesset approved the first reading of the so-called loyalty in culture law. This controversial legislation aims to allow the Culture Ministry to deny government support to cultural institutions for a variety of reasons, including but not limited to denying Israel’s existence as a Jewish and democratic state, incitement to racism, support for terrorism, desecrating the flag, marking the anniversary of Israel’s independence as a day of mourning (i.e., the Palestinians' Nakba Day), and so on.

The law lies on a continuum of right-wing, nationalist legislation characteristic of the current government. Other such legislation includes laws to weaken the legal system, in particular the Supreme Court. To the latter end, the Knesset is debating an override clause that targets the court, allowing the legislature to override its rulings declaring laws unconstitutional.

Since the formation of the current right-wing government after the 2015 elections, Zilber and many of her colleagues at the Justice Ministry have found themselves torn between their obligation to represent the government and their desire to defend the old democratic order as they knew it. In the case of the culture law, both Zilber and Attorney General Avichai Mandelblit have expressed reservations and ultimately came to oppose it. Mandelblit withdrew his pointed opposition to the law after a series of amendments, but he still believes it is fraught with problems.

At the Nov. 6 committee meeting, Zilber presented the position of the Attorney General's Office. “Culture means freedom of imagination and beauty,” she said. “It means a multiplicity of voices and courage and defiance and candidness. It means freedom of expression that is not sycophantic and that is not constantly adapting itself so as to meet the test of governmental norms.”

Zilber did not simply make do with the offering of a legal opinion. She also mourned a country in the process of change.

That was all Justice Minister Ayelet Shaked needed to launch a personal attack against Zilber, who seems to have been marked as a target even before she delivered her speech. That same day, Shaked demanded that Zilber be fired, claiming that she had violated professional norms by expressing personal opinions.

Zilber’s colleagues at the Justice Ministry were quick to back her up, even calling an emergency meeting. Meanwhile, Mandelblit announced that he has no intention of firing Zilber. As a result, the two camps are now locked in a face-off pitting the left and the legal establishment against the ideological and anti-institutional right (which although in power, projects an underdog stance against state institutions). The tempest has yet to subside.

Zilber is one of the most powerful women at the Justice Ministry. She is a public servant charged with defending the government’s positions and legislative initiatives, even when they run counter to her personal beliefs and worldview. Over the past few years, she has found herself disagreeing with the government on more than one occasion.

In 2017, she was relieved of the authority to deal with issues pertaining to West Bank settlements after her position on budgets for the Settlement Division came under criticism from the political right and the settler movement. Nevertheless, refusing to back down, Zilber has continued to present views that veer from the official positions taken by Shaked. She has often been critical and at times defiant.

Zilber opposed Shaked when the justice minister tried to advance a bill that would have given ministers the right to select the legal advisers for their ministries, the problem being that it could lead to the positions being open only to those who express loyalty to the minister and not to the law per se. Both Zilber and Mandelblit voiced their opposition, arguing that it would infringe on legal advisers’ independence and turn their positions into a part of larger political games.

Zilber’s remarks in the Knesset were like a bombshell launched into an already volatile environment. She basically raised the banner of revolt on behalf of the legal system, whose members feel like they are being trampled by Shaked and the government at large. As a result of the ensuing tempest, Zilber has become an icon of the left and within the legal system (even though she comes from a Revisionist, i.e., right-wing, family). She is a symbol of an establishment revolt against the brute force employed by Shaked to further her own agenda.

Meanwhile, Shaked needs Zilber as a punching bag. As far as Shaked’s electorate is concerned, Zilber represents the legal system's predatory approach toward them. While Shaked failed to have Zilber fired, she has been waging an incessant campaign against her since Nov. 6, using interviews and social networks to broadcast that Zilber went beyond her official role and that she is welcome to resign if what she wants is a career in politics.

For Shaked, her campaign against Zilber wins her points from the right. That is what Naftali Bennett, chairman of her party, HaBayit HaYehudi, appeared to suggest when in an interview on Army Radio he called Zilber's speech “more appropriate to a demonstration by the left.” He added, “It makes no sense to have legal advisers becoming politicians.”

Yet, despite these personal attacks, Zilber is in no way a victim. She is a focused, strong and intelligent woman with a worldview of her own and an agenda. It is possible that she felt a sense of urgency, or perhaps even a sense of mission, to stop the state from heading in the direction it is currently going, or as she says, “changing.” She knew that there would be political implications to her comments and that they would not be passed over quietly. She took a calculated risk, knowing that Shaked would have a hard time firing her.

While Mandelblit has instructed Zilber to avoid appearing in the Knesset or before the government for now, she is already in a very different place. She has quite possibly branded herself as the only person to fearlessly stand up to Shaked and the other ministers and to defend herself and her colleagues as gatekeepers. That she is now a familiar face to the public will turn any attempt to harm her into a volatile media and political event. As such, it is not at all certain that Shaked won this round.