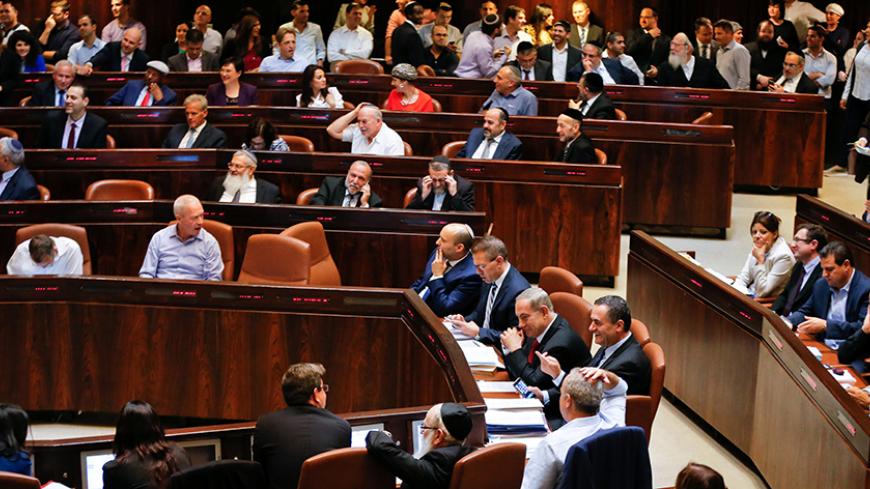 Israeli lawmakers attend a preliminary vote on a bill at the Knesset, the Israeli parliament, in Jerusalem, Nov. 16, 2016. - REUTERS/Ammar Awad

Prime Minister Benjamin Netanyahu’s weekly statement to the press, made from the Likud Party’s chambers in the Knesset on Nov. 28, conveyed a sense of sheer euphoria both for Netanyahu and the large numbers of Likud activists who came to rub shoulders with the government.

Netanyahu made his grand entry into the crowded hall like a victor returning from the battlefield. He stopped to shake hands with the many Likud supporters who packed the room and to compliment himself on the way his government handled all the fires and arson that raged across the country last week.

Compared with his earlier statements that were issued when the country actually contended with the fires, the prime minister was a little less decisive when it came to casting blame around. He spoke positively about the way that Jews and Arabs collaborated in fighting the fires and avoided using the term “terrorist arson,” which he himself coined just a few days earlier. Instead, he simply made do with saying that some of the fires were caused by arson.

Nevertheless, the term “terrorist arson,” or as last week’s events were sometimes termed, “the arson intifada,” has since entered Israel’s public and political lexicon. As expected, these terms only boosted the right-wing coalition’s agenda.

Chairman of the Yisrael Beitenu coalition faction and Knesset member Robert Ilatov did his own part to fan the flames by accusing fellow Knesset member Ahmed Tibi of the Arab Joint List of encouraging the arson. According to Ilatov, Tibi incited the arson attacks during an interview with the Lebanese Al-Mayadeen TV network, when he called on Palestinians and Israeli Arabs to rise up against the Muezzin Law proposed by Ilatov to limit the use of loudspeaker systems in mosques. According to Ilatov, “Last week, we saw the consequences of Knesset member Tibi’s call for rebellion and his irresponsible incitement in all the cases of terrorist arson in Israel. It was a new kind of attack, completely unprecedented, which crossed every imaginable red line. What we are talking about here is nothing less than a weapon of mass destruction, sponsored by the Lebanese Al-Mayadeen TV network, the Hezbollah terrorist organization and Knesset member Ahmed Tibi.”

With such a hot wind blowing through the coalition, volatile new laws such as the Muezzin Law and the Regularization Law (which authorizes illegal outposts in the West Bank) are expected to come up for a vote in the Knesset on Nov. 30. If there are no last minute surprises, such as opposition to the Regularization Law by Chairman of the Kulanu faction Moshe Kahlon, the Knesset will approve the two laws pending further legislation procedures. It will be one of the most ignominious days in that august body’s history as far as maintaining the rule of law is concerned or the rights of minorities, for that matter. In private talks held Nov. 28, Coalition Chairman and Knesset member David Bitan expressed his belief that chances are that the Knesset will vote for the two laws: the Regularization Law in its first reading, and the Muezzin Law in its preliminary reading.

In the Knesset on Nov. 28, Knesset member Tzipi Livni, herself a former justice minister and co-leader of the Zionist Camp, could not hide her concerns about the proposed laws. “After last weekend,” she told journalists at the Knesset, “we should reconsider whether passing the ... Suspension Law, the Muezzin Law and the Regularization Law will contribute to the volatility of the situation.”

On her Facebook page, Livni described the Regularization Law as follows: “We have to put the facts on the table. A majority of Knesset members are trampling on the law and our constitutional values, as the attorney general and all the legal advisers for the Knesset and government have said. The Regularization Law exposes Israel to legal, diplomatic and security risks and will lead to a binational state. And all of this is happening by rushing legislation through the Knesset without allowing for all the implications of this legislation to be heard. … This is a dangerous law, which is harmful to democracy itself and to egalitarian Judaism.”

The current mood in Netanyahu’s right-wing coalition often creates the impression that the settlers are actually the ones setting the tone there through their representatives in the HaBayit HaYehudi and Likud parties. And in such a situation, it seems that even though the prime minister himself recognizes the devastating implications of the Regularization Law, he is having a hard time throwing his weight around to stop it.

On the evening of Nov. 28, Netanyahu and his team used a series of press briefings in an attempt to apply pressure on HaBayit HaYehudi. They were hoping to get the party to postpone bringing the law up for a vote, since it will be overturned by the Supreme Court anyway — the attorney general, Avichai Mandelblit, made that clear. The press quoted Netanyahu at the Cabinet meeting as warning his ministers that the law could lead to senior Israeli officials being charged before the International Court of Law in The Hague. He is still trying to promote a compromise, proposed by Mandelblit, in which residents of the Amona outpost, which was built on privately owned Palestinian land, would be moved to alternative buildings on abandoned land until a permanent solution could be found for them. Mandelblit’s one condition is that the Regularization Law be shelved.

HaBayit HaYehudi was not impressed by Netanyahu’s warnings or Mandelblit’s compromise proposal. They announced that they have no plans to ease up in their efforts to advance the controversial law. Knesset member Nissan Slomiansky of HaBayit HaYehudi, chairman of the Knesset’s Constitution, Law and Justice Committee, clarified that his committee is not obligated to accept the legal opinion of the state attorney general. He said that final authority lies with the Knesset. It is within the Knesset’s rights to reject the legal advice of the attorney general and other government advisers for that matter. That is exactly how contemporary Israeli politics has become a no-man’s land: by mocking and dismissing the professional opinions of its most senior legal authorities. In Netanyahu’s rowdy right-wing coalition, trampling on the rule of law can be beneficial politically. Large numbers of Knesset members and ministers have no qualms about taking advantage of that.

In the event that the voice of reason prevails and the Regularization Law fails to pass, the populist right can seek solace in the passing of the Muezzin Law. This ugly and discriminatory law has been promised a majority, now that Health Minister Yaakov Litzman of the ultra-Orthodox party Yahadut HaTorah has succeeded in adding an exception to the law, exempting synagogue sirens announcing the start of the Sabbath. As part of the compromise, the law will forbid the use of loudspeakers from 11 p.m. to 7 a.m., thus enabling the Sabbath sirens, which are sounded on Friday afternoons and evenings.

Even if large parts of the Israeli public feel uncomfortable about the attack on freedom of religion inherent in the Muezzin Law, the “arson intifada” campaign by top politicians on the right has managed to soften that resistance. Following a conversation with Turkish President Recep Tayyip Erdogan, President Reuven Rivlin — identified with the political right — asked that this unnecessary and incendiary law be shelved. But in the current climate prevailing in the Knesset, even a statement by Rivlin will have absolutely no impact on the expected outcome.