In response to the "transparency bill" designed to hamstring watchdog and human rights associations, opposition Knesset member Tamar Zandberg has initiated a bill requiring all associations to disclose their public funding sources. 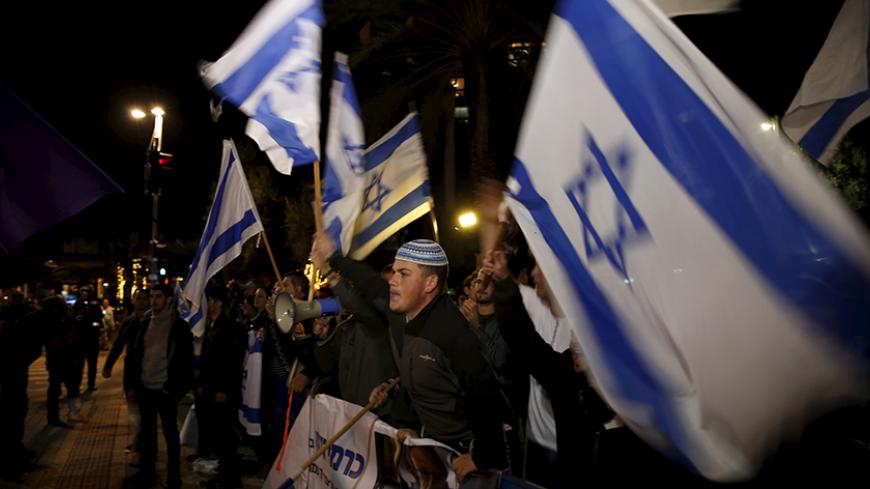 “Something good finally came out of the government’s persecution of leftist associations,” Knesset member Tamar Zandberg of Meretz told Al-Monitor. “It made us wake up, stop being passive; it drove us to search where the right-wing NGOs’ budgets, amounting to millions of shekels, actually come from. We were surprised to discover that some of this money came out of the taxpayers’ pockets and was hidden [in the state budget] under the generic heading of 'participation.'”

Zandberg was referring to two recent investigative reports. One was published by the Israeli news website Walla, and the other by the Peace Now movement, both of which add to a 2014 investigative report by Molad. The investigations present a disturbing picture: Public money is finding its way to nongovernmental organizations linked with the far right, without those groups being required to report on their funding sources. After all, Israeli law does not require it of them.

Walla’s investigation, the results of which were released Jan. 13, found that the right-wing organization Ad Kan — which sent undercover activists to infiltrate various watchdog and human rights organizations and document their work from the inside — was funded in part by the Samaria Settlers’ Committee. That group, in turn, receives funding from the Samaria Regional Council — in other words, from public funds.

The Peace Now investigative report published in December examined the financial reports of nine right-wing Israeli NGOs for 2006-2013. In those years alone, some 580 million shekels ($145 million) flowed into the coffers of those organizations. The investigation also found that the total contributions from undisclosed sources came to 445 million shekels ($112 million). The actual sources of these donations were American donors who didn't disclose their identities.

A much more disturbing detail, however, is the source of 95 million shekels ($24 million) that appears under “participation.” It comes from the state itself, government support funneled directly to right-wing NGOs. So, for example, the umbrella settlement organization Yesha Council took in some 59.8 million shekels ($15 million) of “participation” money in 2006-2013. In that time, the Yesha Council funded numerous political campaigns by settlers and the right.

Peace Now’s investigation was motivated by various laws proposed by parties on the right, including the transparency bill proposed by Justice Minister Ayelet Shaked of HaBayit HaYehudi. The legislation was intended to increase supervision of money provided to left-wing NGOs by foreign governments. Shaked’s version of the law sparked an uproar over its requirement that representatives of left-wing NGOs supported by foreign money wear a special badge when visiting the Knesset.

At the weekly Cabinet meeting on Jan. 17, Prime Minister Benjamin Netanyahu announced that he supports Shaked’s bill on the condition that the badge requirement be removed.

At the same time, a group of opposition Knesset members led by Zandberg proposed a law intended to promote transparency among right-wing NGOs. According to the proposed law, co-sponsored by Knesset members Karin Elharrar and Yael German of Yesh Atid and Nahman Shai and Itzik Shmuly of the Zionist Camp, all NGOs operating in Israel will be required to provide a detailed account of public money transferred to them by government ministries and local authorities. The requirement would effectively mean an end to the unclear “participation” loophole.

The written rationale for the proposed law states that there is currently widespread support for the activities of these groups from government ministries and local authorities alike. There is no public oversight of either the group itself or the minister who funded it, since the groups' obligatory financial reporting does not include the sources of these public funds. According to the proposed law, all funding that originates in public money must be reported in precise detail including the amount, the identity of the body providing the funds and the specific project for which the funding is allocated. All of this is intended to put an end to an estimated hundreds of millions of shekels per year being transferred to pay for the pet political objectives of various government ministers, all unrecorded.

In an interview with Al-Monitor, Zandberg sounded pleased with the “retaliatory action” that she and her opposition colleagues initiated.

“I expect the right-wing government to stop the hypocrisy and to allow for transparency when it comes to budgetary allocations to right-wing NGOs,” she said. “Transparency is for everyone. The public needs to know if its money funds price tag activities, as the Molad investigation revealed. The public needs to know that the Samaria Settlers’ Committee received over 6 million shekels [$1.5 million] from the Samaria Regional Council, which is supported by government funding under the generic ‘participation' category.”

The fact of the matter is that there is almost no chance that such a law will pass. The coalition will torpedo it, and the ultra-Orthodox parties that use the loophole to transfer money to their own organizations will block it at once. Nevertheless, Zandberg refuses to accept this assessment.

“I’m really not sure that this is what will happen,” she says. “This law is necessary, and it is an excellent law for everyone. If there is to be transparency, then let’s go all the way with it, so that it covers all NGOs operating in the country. You can’t just go after left-wing NGOs. That is hypocritical. I believe that today, in an era of transparency, this law is essential, and the public will demand it. The public needs to know where its money is going. It’s rudimentary. Justice Minister Ayelet Shaked and the rest of the government must support this law. Otherwise, they must be held accountable to the public as to why they help to conceal where the public’s money is going. It is legitimate for the government in power to distribute tax money, but at the very least, we must know where our money is going.”

Zandberg admits that the initiative for her proposed law came as a reaction to the right's activity against left-wing NGOs.

"In many ways, we should be thankful to the right-wing parties for initiating these laws against left-wing NGOs,” she explains. "It forced us to wake up and try to understand what is happening on the other side. What we discovered was that while the right acted so cynically from a political perspective by intentionally attacking the left in this way, they themselves were acting in the most un-transparent way imaginable. We found a can of worms, with public funding being used, for instance, to produce anti-Semitic film clips that paint targets on the backs of citizens. We uncovered a vast network of political connections based on foreign money from private individuals. I believe that this is only the tip of the iceberg.”