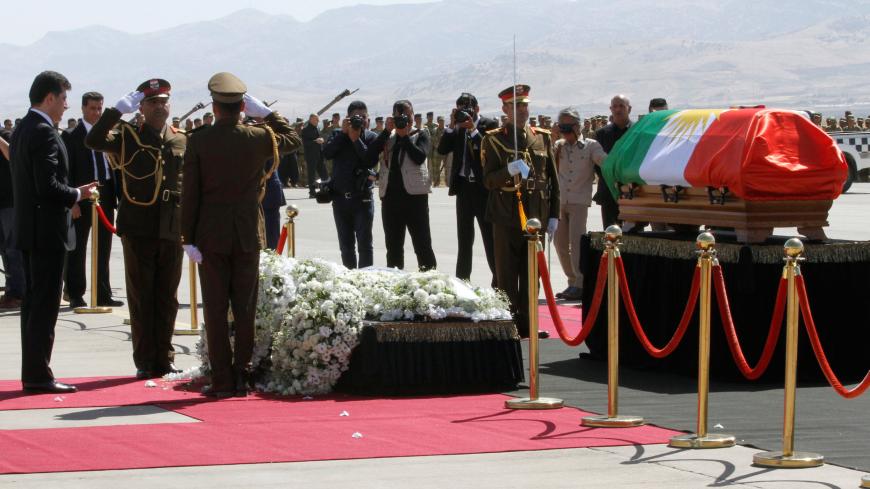 On Oct. 13, US Secretary of Defense James Mattis conveyed a message via reporters that Iraqi parties should “stay focused on defeating ISIS,” or the Islamic State (IS).

The contrast might be illustrative of what to expect in coming days. Despite long-standing US political and military ties with both Baghdad and Erbil, it is Tehran, not Washington, that seems best placed to determine the course of events, as we wrote in this column two weeks ago. Iran-backed Popular Mobilization Units (PMU), which recently liberated the city of Hawija from IS, as Shelly Kittleson reports, have lined up in support of Iraqi government forces around key military and oil installations outside Kirkuk, which is defended by Iraqi Kurdish peshmerga units.

Iraq Prime Minister Haider al-Abadi has been able to play both statesman and nationalist by opposing the Iraqi Kurdistan Region’s independence referendum and seeking a negotiated solution to the crisis. His endgame includes re-establishing Iraqi government control of areas of Kirkuk lost to IS in 2014 and subsequently seized by Iraqi Kurdish forces.

Abadi would prefer a victory without bloodshed, given Iraq’s fragile polity. The precedent of the Iraqi referendum could spur Basra and some Iraqi Sunni communities to seek autonomy as well, as Adnan Abu Zeed reports. But there may now be an escalatory dynamic, and Abadi is one of several players, with Iran holding the balance.

The crisis over the referendum has given new charge to the Patriotic Union of Kurdistan (PUK), which has strong ties to Iran. At Talabani’s funeral, Iranian Foreign Minister Mohammad Javad Zarif sat one seat away from Iraqi Kurdistan President Massoud Barzani; the United States was represented by its ambassador in Iraq. Perhaps it is no surprise that Soleimani is in PUK territory, as Iran-backed militias are opposite peshmerga fighters on the Kirkuk front.

The PUK had been skeptical of the independence referendum, which was driven by the Barzani-led Kurdistan Democratic Party. The PUK, including the late president's son Bafel Talabani, has taken the lead in calling for a negotiated solution to the crisis and for holding talks with Iraqi President Fuad Masum, who is also a Kurd, in Sulamaniyah, the party’s home base in the region.

There is also the role of Iraqi Turkmens, who number about 3 million (about 8.3% of Iraq’s population) and are concentrated mostly in Kirkuk and surrounding regions. Turkmen parties opposed the independence referendum and have been able to “establish armed factions within the [PMU] in mixed areas such as Tuz Khormato and al-Bashir,” writes Hamdi Malik. “Shiite forces such as Asaib Ahl al-Haq backed the Turkmen PMU factions to pressure the Kurds in these areas. … The Turkmens hope the liberation of Hawija and adjacent areas as well as pressure from the federal forces will ultimately weaken the Kurds in these areas.”

Turkey deployed special forces, commandos and Free Syrian Army (FSA) units into Idlib, which is mostly controlled by Hayat Tahrir al-Sham, the al-Qaeda-linked armed group, in accord with a de-escalation agreement with Russia and Iran. The Syrian government criticized the incursion.

Khaled al-Khateb reports from Aleppo, “Although Turkey controls the FSA factions in the liberated areas, it still needs the allegiance of the tribes spread across the areas they hold. Organizing the tribes into a council makes it easier for Turkey to control them. Hence, the new council's formation is a boon for Turkey.”

“The tribes constitute a strong suit in the civil war, so all the parties involved want to win them over,” Khateb adds. “Turkey is trying to take advantage of the role the tribes play in the liberated areas while also preventing the regime of President Bashar al-Assad or the US-backed Syrian Democratic Forces (SDF) from enrolling them as allies. Tribes are particularly prominent in northern and eastern Syria, where they have a lot of social clout. The SDF has relied on several tribes in the Aleppo and Raqqa countrysides in its fight against [IS]. Some tribes have also fought with the regime in Aleppo's eastern countryside. The establishment of the new tribal council in the liberated areas is a step aimed at getting the tribes to ally with Turkey.”

Syrians are suffering unacceptable levels of violence, and civilian casualties have spiked recently as a result of what may be the final or near final battles against IS in Raqqa and Deir Ez-Zor.

A report from the UN secretary-general to the Security Council last month notes that “ongoing clashes, in particular military operations targeting strongholds of [IS], continued to result in the injury, death and displacement of the civilian population and the destruction of civilian infrastructure” and contains a plea “for the parties to the conflict, in particular the Syrian Government, to release detainees, abductees and missing persons.”

The spike in civilian casualties may have obscured another trend in the report, which acknowledges “the persistent and determined efforts to reduce violence through de-escalation agreements, which have delivered observable results in reducing hostilities by all parties to the conflict.”

The report points out that there are nearly a million fewer people living in besieged or hard-to-reach locations in Syria, a total of 3.47 million, down from 4.44 million, “as a result of increased access in the northeast of the country.” The UN High Commissioner for Refugees reported in June that 440,000 internally displaced Syrians and over 30,000 refugees had returned to their homes in the first six months of 2017. It is a good bet that those numbers are increasing.

Although the situation is fragile, we can say at this point that the de-escalation zones have exceeded most expectations and may offer the best chance in years for a renewed political process. That is certainly the plan of UN Syria envoy Staffan de Mistura, who told the Security Council on Sept. 27 that “de-escalation should be a precursor to a truly nationwide cease-fire, and to action on the humanitarian and confidence-building fronts … [and to] laying the basis for a renewed Geneva process — one that moves from preparatory talks into genuine negotiations on the political future of Syria.”

De Mistura is banking on a Saudi initiative, a "Riyadh 2" conference in Geneva, to unify and impart “realism” into the opposition platform prior to a new round of Geneva talks to commence in October or November.

Signs of realism may be evident among Syria’s Kurdish leaders. Gen. Mazlum Kobane, the chief commander of the SDF and leader of its military campaign in Raqqa, told Amberin Zaman in September that he considers the Syrian government a “threat to us at present," but added that "one has to come to terms with the current regime. The Syrian regime is a reality. Militarily, the regime has won a victory against the opposition — the opposition other than us, I mean — at least in the areas it is currently present. And looking at things objectively, the regime is here to stay." He also said, "Our essential objective is to negotiate with the central government and get a certain status for the areas we liberated. If required, we are ready to engage in dialogue with the central government on this.”