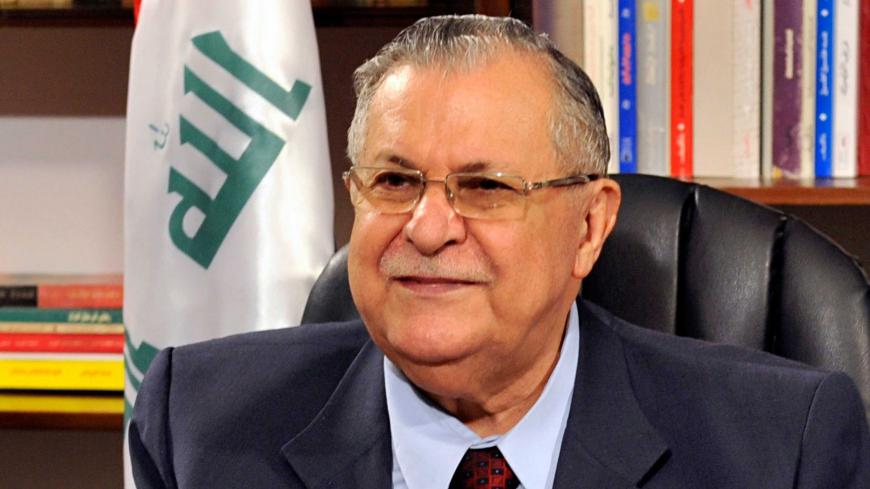 The passing of former Iraqi President Jalal Talabani on Oct. 3 was extensively covered by Iranian media, with most newspapers featuring it on their front pages.

With the crisis over the Sept. 25 Kurdistan independence referendum worsening, Iranian media described Talabani’s death as harmful for Iraq’s unity. The media described him as a caring Kurdish politician who always sought to bring peace to his country.

Talabani long enjoyed a cordial relationship with Iranian officials, and many Iranian media outlets emphasized his ties with Iran and his long presence in the country. Under the headline “The peace is sorrowful for Mam [Uncle] Jalal,” the government-run Iran daily wrote Oct. 4, “Talabani lived in exile in the city of Karaj for 25 years, and had a warm relationship with Iran. During the years of the [1980-88] Iran-Iraq War, the Patriotic Union of Kurdistan under the leadership of Talabani stood beside Iran and fought against the Baath regime of Iraq.”

Iran daily added, “Talabani was the first president of Iraq who visited Iran after former [Iraqi] President Abdul Rahman Aref’s trip in 1966. He always contemplated Iran as the undeniable power of the region, and stated that ‘Wherever the Kurds are in the world, they are partly [from] an Iranian origin.’ Talabani frequently called Iranians the cousins of Kurds, and knew betrayal of Iran as a betrayal of one’s family.”

Reformist Shargh daily argued Oct. 4 that the former Iraqi president was an advocate of dialogue and negotiation to resolve disputes. “The former president of Iraq spent a great part of his life resolving the differences between Kurds, Arabs and Shiites in Iraq. … While he was striving to decrease the tensions between Erbil and Baghdad, and right after his meeting with [former Iraqi Prime Minister] Nouri al-Maliki, he suffered a stroke.”

Majlesi wrote, “Under the current circumstances, the lack of a politician like Talabani is sensed. If he was active [in his last days of his life], he could have led the demands of Iraq’s Kurdistan region to be realized by diplomatic approaches, negotiations and attracting the satisfaction of neighboring countries.” He added, “Now that Talabani has passed away, it would be better if the government of Iraqi Kurdistan [would seek to] reach a compromise via a win-win agreement and negotiation with the central government [in Baghdad].”

Meanwhile, most senior Iranian officials also expressed their sorrow over Talabani’s death. In a condolence message, President Hassan Rouhani said Oct. 3 that the late Iraqi Kurdish leader had a key role in Iraq's national unity and integrity, as well as strengthening the political process and promotion of Iraq's role in the region and the world. Rouhani added, “His role in deepening brotherly bonds between the two Iranian and Iraqi nations is unforgettable.”

Along with other high-ranking officials, Foreign Minister Mohammad Javad Zarif also sent a condolence message: “He was one of the effective, prominent and caring figures of Iraq who spent his life for the cause of freedom, reputation and independence of his nation and country as well as protecting [Iraq’s] territorial integrity and national unity.”