Turkey's president has renewed threats to disrupt the exportation of Iraqi Kurdish oil and invoked Russian cooperation in doing so, despite Russian claims of non-interference. 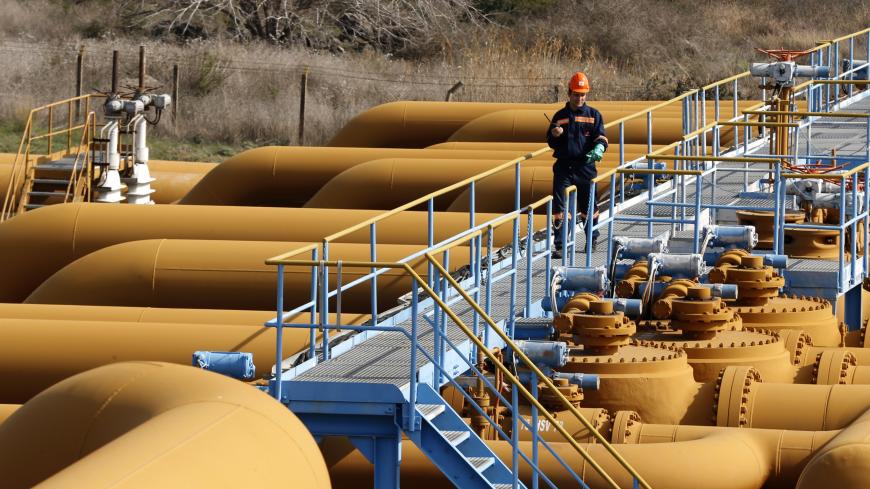 A worker performs checks at Turkey's Mediterranean port of Ceyhan, which is run by the state-owned Petroleum Pipeline Corporation, through which crude oil flows, Adana, Turkey, Feb. 19, 2014. - REUTERS/Umit Bektas

Turkish President Recep Tayyip Erdogan renewed threats to shut down a pipeline carrying Iraqi Kurdish oil, upending claims that he has toned down his rhetoric over the controversial referendum on Kurdish independence and adding Russia to the mix.

Briefing reporters on his flight home from a one-day trip to Iran yesterday, Erdogan said, “If a decision is made on closing oil taps in the region, it will be made by us. Turkey, Iran and Iraq’s central government will do so together.”

Erdogan went even further today, telling a group of community leaders from Turkey’s mainly Kurdish southeast region gathered at the presidential complex in Ankara, “Now all the airspace is going to be closed, flights have already been banned [by the central government in Baghdad]. Who is going to come? Who is going to leave? Soon the [Iraqi Kurdish] borders will be closed. How will you go in and out?”

The questions were directed at the Iraqi Kurdistan's president, Massoud Barzani.

Erdogan is furious with the Iraqi Kurdish leader for pressing ahead with the referendum in defiance of repeated calls from Turkey, Iran, Baghdad and the United States to scrap it.

In an unexpected twist, Erdogan’s comments about the pipeline appeared to be mainly in response to remarks by Russian President Vladimir Putin. The Russian leader declared at an energy forum in Moscow yesterday that Russia was following a policy of “non-interference” in Iraqi Kurdistan and that it is not in anyone’s interest to halt the Kurdistan Region’s oil exports.

Russia’s state-owned energy giant Rosneft signed a memorandum of understanding in June with the Kurdistan Regional Government (KRG), giving Rosneft the right to pick five new oil and gas production blocks and to expand the capacity of the oil pipeline running from the Kurdistan Region to loading terminals in the Turkish port city of Ceyhan from 700,000 barrels per day (bpd) to 1 million. Iraqi Kurdish crude purchased by Rosneft is being delivered to its refineries in Germany.

The company is believed to have already injected at least a billion dollars to the KRG. The infusion has allowed the KRG, among other things, to settle a long running legal dispute with Pearl Petroleum, which is operating Iraqi Kurdistan's richest gas fields in Chamchamal and Khor Mor.

On Sept. 18, Rosneft and the KRG inked another memorandum of understanding whereby Rosneft would build, own and operate a natural gas pipeline to carry the region's vast reserves of high quality natural gas to Turkey. According to Amy Myers Jaffe of the Council on Foreign Relations, “The mooted deal is said to include a possible stake in the Kirkuk oil field,” including “areas previously operated by the Iraqi states’ North Oil Company.”

In a 2016 study, the Oxford Institute for Energy Studies predicted “exports of around 1 million bpd of oil and 10 billion [cubic meters] of gas by the early 2020s are plausible given the discovered resource base and current stage of development.”

It is widely assumed that Rosneft went ahead with the deals with Turkey’s blessings. Could Erdogan risk shutting down the pipeline without triggering another costly row with Russia so soon after fixing the one over the downing of the Russian jet in Syria and when its relying on Russia to temper Kurdish ambitions there?

Energy-hungry Turkey buys around half of its natural gas from Russia and has been looking to decrease its dependency on its eastern neighbor. A mega energy deal it signed with the KRG in November 2013 was meant to redress this imbalance and help Turkey realize its ambitions of becoming a major energy hub. If the Rosneft deal was finalized with assurances from Ankara, the move flies in the face of those plans, giving Russia even more of a stranglehold over sales of natural gas to Turkey.

It remains unclear whether Erdogan has had a change of heart and and will disrupt Iraqi Kurdish oil sales. This more than anything would have a crippling effect on the KRG, which is already reeling from the effects of the collapse in global oil prices.

There are unconfirmed reports that Turkey is withholding the proceeds of the sales, which are deposited in the state-owned HalkBank and then transferred to Iraqi Kurdish banks. To get around it, the Iraqi Kurds are rumored to be getting some of the cash — particularly from Israel, which is believed to buy some Iraqi Kurdish oil — through alternative channels. But now that Iraq has closed Iraqi Kurdistan's air space to international flights, it's improbable that any such arrangement could continue. Israel is one of the most enthusiastic proponents of Iraqi Kurdish independence, making Turkey and Iran all the more wary.

In an interview with the Atlantic Council’s Aaron Stein, journalist and energy expert Patrick Osgood pointed out that shutting down the pipeline would hurt Turkey in various ways. For one, it would be unable to recover over a billion dollars in transit fees owed by the Iraqi Kurds. Maintaining the pipeline also costs money. The petro dollars used to pay government employees allow them to buy the Turkish products flooding the market. It would also dent Turkey’s image among energy traders.

The volume of trade between Turkey and the KRG is currently estimated at least $2.5 billion. Turkish businessmen are said to be owed some $1.8 billion by the KRG. Turkey’s Economy Minister Nihat Zeybekci recently noted, “When you impose an embargo, your trade and exports stop. … I am the economy minister and I have to reflect on this side of the coin.”

The emerging picture amid a steady flow of articles from pro-Erodgan columnists claiming that Turkey wants Barzani to step down suggests that if Ankara does stiffen sanctions, they will be a temporary measure designed to force his ouster. If so, Turkey is once again misreading the internal dynamics of Iraqi Kurdistan and above all those of the tightly knit Barzani clan.

Correction: Oct. 5, 2017. An earlier version of this article stated that the volume of trade between Turkey and the KRG is estimated at $8 billion annually. The actual volume is $2.5 billion.