Sudan's crop opportunities could be Egypt's boon or bust

Sudan wants to expand agricultural production, which could benefit it as well as Egypt, but Cairo worries that such a development might threaten its supply of the Nile's water. 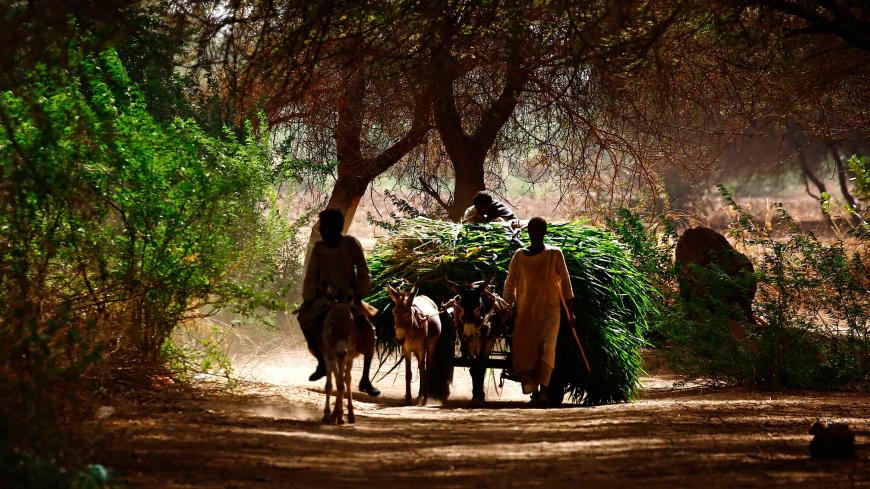 A farmer walks with his donkeys and cart in Sudan's eastern Kassala state, May 2, 2017. - ASHRAF SHAZLY/AFP/Getty Images

CAIRO — Agricultural investments are the name of the game in Sudan now that the United States has lifted long-term economic sanctions against the Khartoum government, but Cairo is worried that Sudanese growth will negatively affect Egypt's water supply. Being free of the sanctions will help Sudan "facilitate banking procedures that constituted a major challenge for investors,” Sudanese State Minister for Investment Osama Faisal told al-Hadath Oct. 7. Agriculture, the main economic sector in Sudan, stands to gain in particular from new investment inflows and the growing global demand for food.

Twenty years ago, in 1997, the United States imposed sanctions on Sudan over concerns that the government was harboring terrorist groups, in particular al-Qaeda, and amid accusations of genocide in the Darfur region. In lifting the sanctions on Oct. 6, the United States cited Sudan’s improved counterterrorism and humanitarian efforts and its commitment to cut military ties to North Korea, with which Khartoum is thought not to have official, diplomatic relations. Washington, however, still considers Sudan to be a state sponsor of terrorism, a designation that carries restrictions on aid and weapon sales.

Sudan's ambitions to expand land and water investments have raised concerns in Cairo that related projects will increase the country's use of Nile River water, cutting into Egypt's supply. Egypt and Sudan share the Nile's water in accordance with a 1959 agreement. Under it, Egypt's allotment is 55.5 billion cubic meters a year to Sudan's 18.5 billion cubic meters.

An Egyptian official in the Water and Irrigation Ministry's Nile River water department told Al-Monitor on condition of anonymity, “There are several mechanisms to make sure that Sudan only withdraws its share of water from the Nile. We can measure and monitor the water levels in the Nile River through the Egyptian irrigation mission in Sudan. We can also rely on a coordination mechanism adopted by the Permanent Joint Technical Committee between Egypt and Sudan for the distribution of water quotas.”

The source further said, “Sudan has increasing ambitions to exploit the Nile's waters through its investments, which will be boosted by increased demand for vast and fertile Sudanese territory following the lifting of sanctions. Also, water storage at the Grand Ethiopian Renaissance Dam is set to start soon and will include Ethiopia in the eastern Nile water distribution mechanism. This will put Cairo in a predicament, as it may hinder its Nile water share, which covers 95% of its water needs.” Once the Renaissance Dam is completed, Ethiopia will control the amount of water that flows to Egypt, and no agreement has been reached on the flow after the dam's completion.

Sudan faces the same predicament as Cairo. Ayman Abdel Wahab, a researcher at Al-Ahram Center for Political and Strategic Studies, told Al-Monitor that Sudan already uses its entire Nile water allotment under the 1959 agreement, so any investment that would expand its irrigation needs would force Khartoum to address the issue of the Renaissance Dam. When the dam is filled, it could deprive both Sudan of any "extra" Nile water, beyond that allotted in the 1959 agreement, necessitating engagement with Ethiopia.

The Food and Agriculture Organization (FAO) of the United Nations has identified Sudan as one of the four countries in the world with the greatest agricultural potential. It is hoped that these countries can help resolve the current food crisis in Africa and ensure food supplies in primarily Arab and African countries.

Sudan has invested heavily in irrigation infrastructure harnessing Nile waters in recent years, including the Merowe Dam (which began operations in 2009) and the Roseires Dam (whose height and storage capacity was increased in 2013). It is also planning on the Dal, Kajbar and al-Sharik dams in the north, to be built over the course of five years with Saudi funding.

Rami Lotfi Hanna, a water politics researcher at the University of Sussex, told Al-Monitor, “Sudan is the key to Egypt's water security. Private investments should be included in the Nile water resources management mechanism to make sure they respect social and environmental sustainability standards.”

Hanna stressed, “All of the Nile Basin countries have other alternatives for water, and these sources must be developed to reduce their dependence on the Nile's water and ensure the sustainable flow of the river.” He added, “While Sudan's expanded agricultural investments [can] lead to [various types of] opportunities, they also entail risks, especially if these investments are to rely on the Nile waters.”

If future projects find other water sources, such as groundwater, they could boost trade between Egypt and Sudan in crops that rely on heavy water consumption. “This would also encourage Egyptian investors to [participate in Sudanese] water and land projects based on economic cooperation ... and integration opportunities,” Hanna said.

Since the January 2011 revolution in Egypt, Cairo has been trying to secure a future food supply by cooperating with Khartoum in joint agricultural investments in Sudan amid a water security crisis currently limiting Egypt's agricultural expansion. The countries reached a consensus on agricultural integration projects in October 2016, but it is unclear when the projects will launch.

“Sudan now has a hostile position toward Egypt when it comes to water,” Hani Raslan, an expert on Sudanese affairs at Al-Ahram Center for Strategic Studies, told Al-Monitor. “There are talks within Sudanese political circles and among the public that Egypt 'owes' Sudan water, as Sudan was not consuming its entire share of the Nile's water [until] recently, and Egypt was exploiting this share in return for nothing. The situation could deteriorate should Sudan declare its adherence to the [1999] Cooperative Framework Agreement, which seeks to promote the 'harmonious' use of the water resources of the basin and deals a blow to the historical quotas of the two downstream states.”

The agreement, signed by six upstream countries, rejects the approach of assigning water shares according to historical rights, instead establishing that every country has the right to use the amount necessary for its national and water security, regardless of the impact on downstream countries. Egypt and Sudan, being downstream, refused to sign the treaty, but Sudan could change course and sign on to the framework agreement to gain the use of more water, thus mooting the 1959 pact, Raslan asserted.

With the potential challenges stemming from Sudan's ambitions to exploit the available resources of land and Nile waters for investment and economic recovery, it seems likely that Cairo would cooperate with Khartoum and try to link Sudan's economic and political interests with those of Egypt to achieve water and food security.