While showing some optimism about the Declaration of Principles it recently signed with Sudan and Ethiopia, Egypt is proceeding with caution concerning its historical water rights. 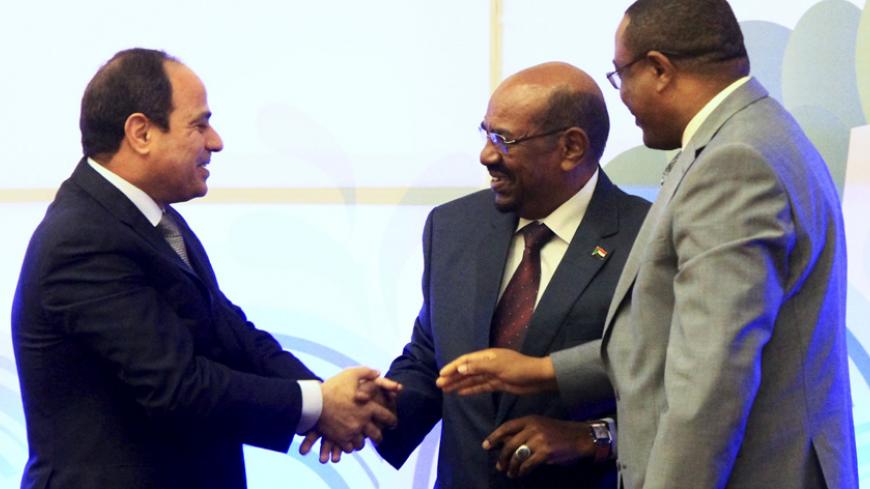 CAIRO — Since the presidents of the Eastern Nile countries of Egypt, Sudan and Ethiopia signed the Declaration of Principles of the Grand Ethiopian Renaissance Dam on March 23, relative official and public acceptance have prevailed in Egypt. After a long historical feud over the Nile waters that Egypt considers part of its national security, Ethiopia and Egypt are trying to rebuild trust.

The international community supports this declaration as the first step toward consensus and cooperation to resolve the dispute over the management of the Nile waters, including such issues as building dams in upstream countries and compromising water usage to achieve water security in all affected areas. However, the parties concerned with this issue are still conflicted over implementing the declaration's principles. The official meetings of Egyptian President Abdel Fattah al-Sisi, his Sudanese counterpart Omar al-Bashir and Ethiopian Prime Minister Hailemariam Desalegn concluded without an agreement on a timeframe or a plan to negotiate an international legal agreement.

The 'Declaration of Principles' agreement outlines 10 principles determining the managerial approach that Sudan, Ethiopia and Egypt should adopt for the Eastern Nile waters. The principles: common understanding, good faith, development, not causing significant damage, fair and appropriate use of water, trust building, exchange of information and data, dam security, sovereignty, unity and territorial integrity of the state, and peaceful settlement of disputes.

Sisi, his national security adviser Faiza Abu el-Naga and Prime Minister Ibrahim Mahlab met frequently to review the articles of the declaration before the president traveled to Khartoum and signed the declaration. An official at the Ministries of Foreign Affairs and Water Resources and Irrigation expressed his fear of signing without reading the text that protects Egypt’s annual quota of Nile waters from Ethiopia.

Al-Monitor asked the legal adviser to Egypt’s Supreme Committee for Nile Water, Ayman Salama, about Egypt’s legal vision of the declaration. “The upcoming phase of negotiations to ratify the detailed agreements will be the toughest and most critical and will require the Egyptian negotiator to persist in order to extract the most gains possible — namely preserving Egypt’s historical rights to the Nile waters,” he said, adding: “The Declaration of Principles is a primary reference agreement that will be followed by more detailed technical agreements to be ratified after the international advisory office finishes preparing studies related to the dam’s technical and security issues. These include dam security, management and operation and reservoir filling.”

The historical agreements giving Egypt an annual quota of the Nile waters, estimated at 55.5 billion cubic meters per year, remain the main issue for Egypt. The Egyptian Foreign Ministry asserted that these agreements will remain intact, particularly the 1959 water-sharing agreement signed with Sudan. Upstream countries have rejected the agreement, claiming that it gives the lion’s share of the water to Egypt.

Then there are the 1902 and 1993 agreements, in which Ethiopia commits to refraining from establishing any projects along the Blue Nile that reduce the flow to the two downstream countries (Egypt and Sudan), in addition to the 1953 agreement with Uganda, which gives Egypt the right to monitor the movement of the Nile waters. There are five agreements with Ethiopia and eight agreements with other Nile Basin countries, but the 1959 agreement with Sudan is the most important.

“The Declaration of Principles did not annul the above mentioned historical agreements, whether they were signed during colonialism or ratified with the Nile Basin countries after their independence,” Salama asserted. He added that the 10 principles in the agreement do not include any article binding Ethiopia to refrain from making decisions that might harm Egypt’s water security. Instead of the term “bind,” the agreement refers to “respect.” Salama said, “The declaration’s preamble mentioned that the “countries vowed to commit to implementing the principles. According to the principle of text as a binding instrument in international law, the commitment to implement all principles stands and should follow the declaration's preamble regardless of any later provision that might look inconsistent with the significance of the word 'committed.'"

Salama pointed out that the principle of good faith is the most important in the declaration, saying, “This principle binds the states to implement their commitments in good faith. Data about the dam cannot be submitted late, and important information should not be withheld deliberately to harm other states.”

Sisi sent several messages in his impromptu statement during the signing of the Declaration of Principles in Khartoum.

“The Renaissance Dam still constitutes a concern for Egyptians, especially since the Nile is their only source of water,” he said, but asserted, “God commands water to flow into Egypt so that Egyptians can live and revive their civilization.” Sisi tried to break the ice with Ethiopia by saying, “We could have lived for years in dispute and doubt, but we have opted for cooperation and trust.”

The head of the Nile Basin and African Study Unit at Al-Ahram Center for Political Studies, Hani Raslan, told Al-Monitor: “The agreement does not have major advantages, but it has important implications. Mainly, it improves Egypt’s image internationally and regionally and in the eyes of the people of the Nile Basin countries. It also tries to reflect the Egyptian intentions and way of thinking as much as possible.”

Raslan added,“The agreement is not a solution to the technical disputes that still exist,” yet noted, “The atmosphere of cooperation and communication may facilitate the dialogue process and reaching results.”

At the technical level of choosing an international expert to evaluate the project, things are still complicated. In August 2014, the water ministers of Egypt, Sudan and Ethiopia met in Khartoum and agreed to a six-month road map to form a national technical committee that would select a consulting firm to carry out studies to test the dam’s impact on Egypt and Sudan. Eight months after these meetings, the committee has yet to select a company, despite numerous meetings in Egypt, Sudan and Ethiopia. The reasons for the delay have not been made public, but inside sources say that there are disputes between Egyptian and Ethiopian experts sitting on the committee over assessing the offers submitted by the consultants and the time frames needed to conduct studies. Egypt is said to be trying to cut down on the time invested, while Ethiopia is stalling.

However, Minister of Water Resources and Irrigation Hossam Maghazi is still optimistic about resolving the outstanding technical issues. In a March 29 statement, he said, “The tripartite principles agreement, which was signed recently by the heads of the three states, had a positive effect on the technical track,” adding, “An agreement on a choice of the consulting firm may be reached in the coming days.”

Egypt is cautiously awaiting indications of the start of real negotiations concerning a binding international agreement on water management in the Eastern Nile Basin that will protect Egypt’s right to its annual quota of Nile water.

Meanwhile, the heavy machinery continues working at the site of the Renaissance Dam, despite all the controversy.