Polarization increases in Egypt as election draws near

Efforts to launch President Abdel Fattah al-Sisi's re-election bid are underway in Egypt amid fears that he will only face, by hook or by crook, a token opposition. 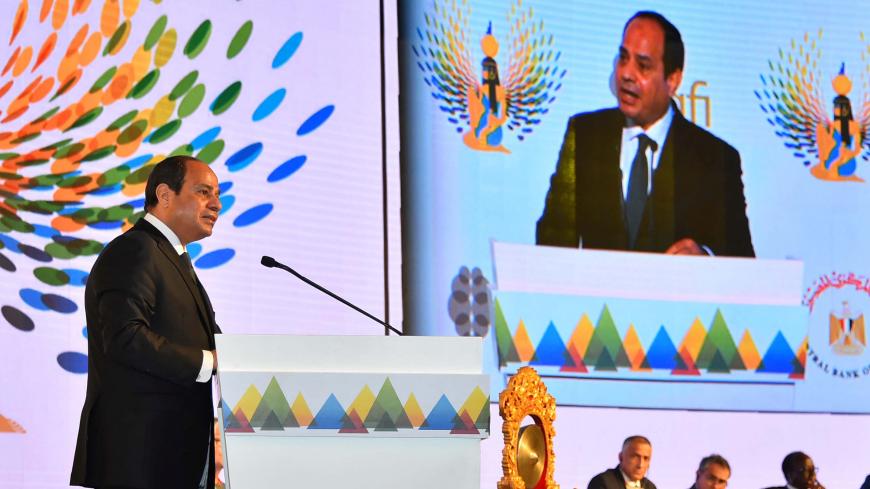 Politicians, celebrities and lawmakers will gather at a luxury Cairo hotel Oct. 16 to launch President Abdel Fattah al-Sisi’s re-election campaign. Abdel Nabi Abdel Sattar, an activist who is spearheading the “Continue Sisi” campaign, said, “It aims to gather 30,000 signatures for a petition urging Sisi to run for a second term in the 2018 presidential election.”

“We want him to continue his difficult mission of fighting terrorism and reviving the economy,” Abdel Sattar told the semi-official Al-Ahram newspaper.

Meanwhile, members of the Egyptian parliament are also launching a campaign to support Sisi’s re-election. Led by parliament’s pro-Sisi majority bloc “In Support of Egypt” and other lawmakers from various political affiliations, including members of the liberal Free Egyptians and El Wafd parties, the “Let’s Build Together” campaign aims to spread public awareness about Sisi’s achievements during his first term.

Kamal Amer, head of parliament’s Defense and National Security Committee, said Sisi’s accomplishments include national megaprojects that have been implemented or are in the execution phase. The campaign aims to highlight Sisi’s efforts to restore stability at a time when Egypt’s neighboring countries face serious challenges. It will also spotlight the progress made by Egypt in its fight against terrorism, Amer told Al-Monitor.

Topping the list of large-scale projects implemented during Sisi’s first term in office is the new Suez Canal inaugurated by Sisi amid much fanfare in August 2015. The government had hoped the $8.2 billion venture — completed within the short span of one year — would resuscitate the country’s battered economy by boosting foreign currency earnings. Two years on, the project has yet to fulfill the government’s promise of higher revenues. A slump in global trade and use of alternative shipping routes have prompted a drop in Suez Canal revenues (from $462.1 million in August 2015 to $447.1 million in July 2017, according to figures released by the Cabinet's Information and Decision Support Center). Nevertheless, the authorities remain confident that the project will yield economic benefits once the Suez Canal region has been developed, as planned, to include an industrial zone.

But the Egyptian public, which had wholeheartedly supported the project and had rushed to purchase state-issued bonds to finance it, is deeply disappointed. Many Egyptians now see the venture as a state “propaganda stunt” and complain that the money could have been put to better use.

“The name ‘new Suez Canal’ is misleading,” said Mamdouh Hamza, a civil engineer and an outspoken critic of the government. “Rather than dig a new waterway as the project’s title suggests, a ‘bypass’ was added to the existing shipping lane to allow two-way traffic. The new canal is simply an expansion of the old canal,” he told Al-Monitor, adding, “There was no pressing need for it.”

Hamza also criticized plans for a new administrative capital currently under construction as “yet another unnecessary undertaking.” The new city, located 28 miles to the east of Cairo and which will cost a staggering $45 billion, has been described by Sisi as “a first step in building a modern state.” Hamza argues, however, that “Cairo, a vibrant city with a rich heritage dating back thousands of years, is irreplaceable. ” He believes the project is “a cover for the prospective sale of heritage villas and other property in Cairo to wealthy businessmen from the Gulf for million-dollar profits that would likely go to the government’s coffers.” Many Egyptians share his skepticism about the government’s motives for the new capital.

On Oct. 11, at a ceremony marking the end of the first phase of the project, Sisi dismissed criticism of the venture, insisting that “the skeptics are ignorant of the facts.”

Hamza, who rejects Sisi’s re-election bid, is preparing to launch “a democratic civil movement” aimed at opposing what he called “the regime’s failed policies.” The initiative, to be announced in the coming days, “will unite the fragmented opposition” and “give its backing to any candidate running against Sisi in the next election, provided that that contender is committed to realizing the goals of the 2011 Revolution and shares our aspirations for a secular, civil state.”

Hamza and other opposition figures point to the government’s “intensifying crackdown on dissent” as proof of “the insecurity of the current leadership.” They say the arbitrary arrests and detention of thousands of opponents of varied political stripes that have taken place since the July 2013 ouster of Islamist President Mohammed Morsi and rampant inflation are costing Sisi his popularity. In recent weeks, the government clampdown has expanded to target members of Egypt’s LGBT community. Dozens of people suspected of being gay have been detained following the raising of a rainbow flag at a concert last month in Cairo. The flag had been raised in a gesture of solidarity with the band’s lead singer, who is openly gay.

Critics also question Sisi’s ability to restore stability and security. They voice concerns that “the government’s repressive policies are fueling terrorism.” Indeed, an Islamist insurgency that rages on in northern Sinai is causing casualties among the security forces on a near-daily basis and the attacks have spilled over into the mainland. On Oct. 12, a Coptic Christian cleric was killed by a radical Islamist in a street attack in the city of Al-Salam, northeast of Cairo, the latest in a series of deadly assaults on Christians in Egypt. The attack sparked outrage among members of Egypt’s minority Coptic community, now living in fear after losing faith in the government’s ability to protect them.

In August, Sisi said he would contest the 2018 election “if that is the will of the Egyptian people.” He is widely expected to win, albeit with far fewer votes than in 2014. Many see his potential victory as “a done deal” rather than a manifestation of the will of the people.

“During the Mubarak era, election fraud was the norm and was expected even," Hisham Qassem, a publisher and political analyst, told Al-Monitor. "Voters were offered rice and sugar in exchange for their votes. We’re now seeing new election manipulation tactics: Votes for Sisi are guaranteed by way of incentives offered to certain groups such as election monitors or by salary increases for the police force and others. Potential rival candidates, even those with only a slim chance of winning, are already facing intimidation, and the pro-government press has mounted smear campaigns against them.”

On Sept. 25, Khalid Ali, a prominent human rights lawyer who is widely perceived as Sisi’s top contender for the 2018 election, was sentenced to three months in prison after a court found him guilty of “violating public decency.” His conviction is related to a photograph that shows him allegedly making an obscene hand gesture as he celebrated the reversal of a controversial government decision to hand over two Red Sea islands to Saudi Arabia. If confirmed on appeal, his conviction, described by Amnesty International as “politically motivated,” would prevent him from running in the election.

The restrictive political climate can only result in an election that has “puppet candidates” running against Sisi to legitimize the vote, Qassem said, warning of a serious public backlash if this happens.

With no shortage of cheerleaders for Sisi, his electoral victory seems assured. But as the vote draws nearer, analysts expect further polarization within society. The gap, however, is no longer between Islamists and non-Islamists, as it was in the last election; it is now between Sisi’s supporters and a varied and growing opposition that is closing ranks and trying to reorganize itself.