With imports and deficit down, are things looking up for Egypt?

Some in Egypt see a decline in imports and decreased trade deficit as temporary phenomena, while others believe it to be an opportunity to develop the country's industrial base. 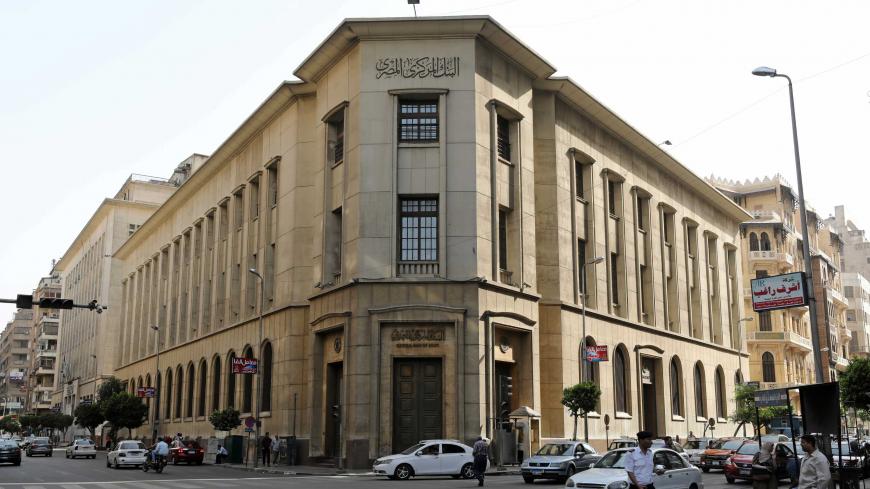 The headquarters of the Central Bank of Egypt is seen in downtown Cairo, Egypt, June 7, 2017. - REUTERS/Mohamed Abd El Ghany

CAIRO — Declining imports have become a cornerstone of Egypt’s monetary and economic policy. As a result, economic and financial institutions have more trust in Egypt’s ability to pay down the debt it has accumulated since the end of 2016 and early 2017.

In an Oct. 3 report, the credit insurance company Euler Hermes said it considered Egypt better able to settle its debts in light of its economic reform policy and floating the Egyptian pound. With these reforms, the value of the pound dropped while foreign currency rates increased along with the price of imports. The subsequent drop in imports has been accompanied by a decreased trade deficit.

Euler Hermes' estimates have been in line with announcements by Egyptian officials. The General Organization for Export and Import Control, under the Trade and Industry Ministry, issued a report Sept. 23 stating that the country's nonpetroleum imports dropped by 23% between January and July, to $30.3 billion, compared to $39.4 billion during the same period last year.

In a Sept. 28 speech at the Canada-Egypt Business Council forum, held at the Semiramis InterContinental Hotel in Cairo, Trade and Industry Minister Tareq Qabeel said that the trade deficit had dropped in the first six months of 2017 by 50% compared to the same period in 2016. The policy of reducing the deficit has been improving monthly. Qabeel announced in an official statement Sept. 29 that the total trade deficit had dropped by 74% in August 2017, falling to $1.130 billion, compared to $4.367 billion in August 2016.

Commenting on the decreases in imports and the trade deficit, Khaled al-Shafei, an economic and tax consultant for several Egyptian investment firms, told Al-Monitor, “The drop in imports and the improvement in the trade balance are positive steps because curbing importation means that the market will search for a local alternative, thus encouraging national production. It also attracts foreign investors in the industrial sector, especially in the wake of the decision to float the pound, which made Egyptian employment wages more competitive compared to other countries. One employee would earn a monthly salary of $200, but now the [pound] equivalent of $200 covers the salary of two employees.”

On Nov. 3, 2016, the Central Bank of Egypt (CBE) began floating the pound against foreign currencies. Consequently, the foreign exchange rate soared, while the pound dropped sharply, with at one point $1 being worth 17.6 pounds instead of 8.83 pounds. The CBE implemented an economic reform program to allow Egypt to receive an International Monetary Fund loan worth $12 billion for three years to support the economy and boost foreign reserves after they decreased to a level threatening the government's ability to pay its debt.

Shafei said, “The national production boom and attracting foreign producers to Egypt will contribute to turning Egypt into an industrial country. Thus, it will be able to boost its exports, if Egyptian and foreign businessmen adopt quality standards that qualify Egyptian products to compete with international products in foreign markets.”

Rashad Abdo, the head of the Egyptian Center for Economic Studies, told Al-Monitor, “This drop [in imports] did not stem from the decision to float the currency, from the increase in the foreign exchange rate and the rise in export costs. The import drop and deficit decrease resulted from several other factors.”

Abdo explained, “The decline in imports is due to several temporary factors, such as the imposition of dumping duties on some local substitute goods, such as reinforcing steel. The improvement in the trade balance is due to the return of Saudi fuel subsidies to Egypt at reduced prices after fuel exports to Egypt were halted between October 2016 and March 2017. These are temporary measures, and Egyptian manufacturers and exporters must take advantage [of them] to reinvigorate their industries. For example, reinforcing steel manufacturers should quickly recoup their losses and stabilize their product prices at a competitive level with imported products.”

He also called on Egyptian exporters and the government to expand the Egyptian market abroad. “The trade balance deficit dropped in part because of the return of Egyptian exports to their natural ranking after Russia, Saudi Arabia, Sudan, Lebanon and many other countries lifted their import ban on some Egyptian products,” Abdo said. “The ban had been imposed at the end of 2016 and early 2017 due to product corruption allegations. However, these measures are not enough. Egyptian products must have a better standing, which is where manufacturers come in, by maintaining quality, and where the state comes in, by concluding agreements with countries where Egyptian products do not have a strong presence, such as the Visegrad countries, some BRICS countries and African markets. President Abdel Fattah al-Sisi has good ties with many of these countries.”

Wael al-Nahas, an economic adviser to a number of investment and banking institutions, believes that the decline in imports and the declining deficit are not positive indicators, but rather “sedatives,” as he put it. “All the factors that led to the decline of imports are temporary,” Nahas told Al-Monitor. “Even the rise in import costs is temporary and linked to the price of the dollar, which will continue to drop gradually so that imports can make a strong comeback. Many products are missing on the local market, and sometimes the local product cannot compete with the foreign one in terms of quality and price.”

Nahas added, “Despite the good quality of local reinforcement steel, it is still expensive compared to its imported counterpart. It is true that Egyptian labor competes in terms of wages, but many of the necessities for the steel industry are imported. Most Egyptian exports are raw materials although manufacturing them or including them in the primary stages of production can raise their export cost.”

Thus, while some experts consider the decline in imports and improvement in the trade balance as temporary phenomena, others view it as an opportunity to develop the nation's industry, even if only temporarily. Only time will tell which is the better approach.