A Turkish air force drone bombed four men picnicking in a remote province sympathetic to the Kurdistan Workers Party (PKK), as authorities claim they were assembling with terrorists. 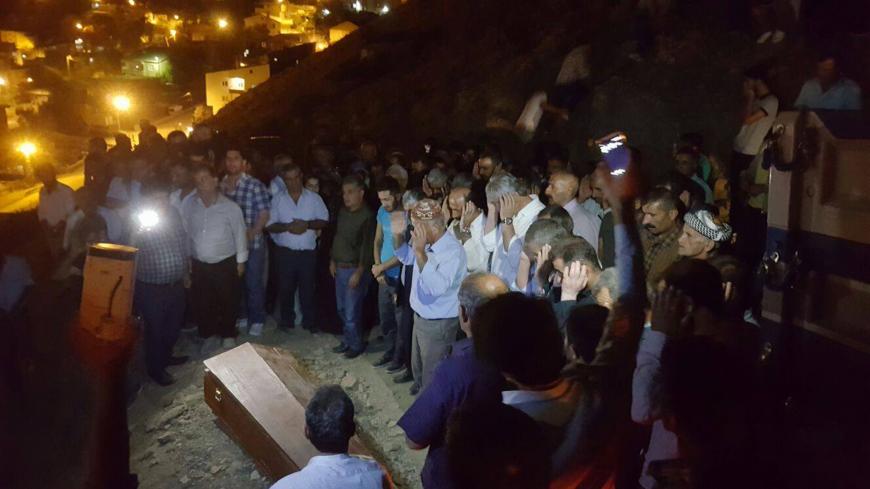 A funeral takes place for one of those killed in a drone strike in Ogul, Hakkari province, Turkey, in this image uploaded Sept. 1, 2017. - Facebook/HDPgenelmerkezi

SIHA — the acronym sounds like the name of a pop starlet. But for some villagers in Turkey’s mainly Kurdish southeast region it spells death. SIHA stands for “Silahli Insansiz Hava Araci,” Turkish for Armed Unmanned Airborne Vehicles, or UAVs.

On Aug. 31 an armed drone belonging to the Turkish air force dropped its payload on four locals as they were picnicking near the village of Ogul in Hakkari, a remote province near the Iraqi border. It was the day before Eid al-Adha. Mehmet Temel died and the other three were injured, one gravely, in the attack. “They left my son’s three children fatherless. … They turned our [Eid] into poison,” wept the victim’s mother as she related the tragedy to members of the pro-Kurdish People’s Democratic Party (HDP).

The Hakkari governor's office confirmed a day later that an armed drone had dropped a bomb on four PKK fighters and what it called four “collaborators” who had assembled with the “terrorists” in the area. The statement read that authorities had established that the discovery of the alleged meeting took place after, not before, the men were struck. “In other words, their supposed crime was uncovered after they were attacked with no prior warning of any kind — it's called extrajudicial killing,” said Sezgin Tanrikulu, a prominent human rights lawyer and member of parliament for the main opposition Republican People’s Party.

The statement further explained that following the attack, the men checked into a local hospital “using their own means.”

Eyewitnesses told the HDP that members of the security forces and armored vehicles surrounded the building. They set upon a group of people demanding to see the victims with tear gas and plastic bullets. At least five people were wounded. One of the people injured said the authorities threatened them when they sought to lodge a formal complaint.

The HDP said in its report documenting the affair that the four men had been allowed through an army checkpoint en route to the picnic grounds. “If there were suspicions about these people, why were they not detained at the checkpoint? And if there was an opportunity to catch them, why was an armed drone used?” the HDP asked.

Sympathy for Kurdistan Workers Party (PKK) rebels runs strong in Hakkari. The province’s mountainous terrain is hospitable to the fighters crossing in and out of Iraqi Kurdistan, where the PKK’s headquarters are currently based.

Tanrikulu told Al-Monitor that a son of one of the men injured in the attack had informed him that his father was now in police custody and had sought his help. “Presumably they want him to confess to links with the PKK,” Tanrikulu speculated. “The impunity we are witnessing today in Turkey is unprecedented. And there are no checks left on the government, no properly functioning parliament, no media, nothing.”

The Ogul incident is reminiscent of another bombing raid that hit the border village of Roboski, in neighboring Sirnak province.

Some 34 people, many of them teenagers, were blown to pieces on Dec. 28, 2011, when two Turkish air force jets struck them as they were carrying smuggled goods across the border. Then, too, the ruling Justice and Development Party (AKP) buried the affair and none of the perpetrators or their commanding officers was called to account. That was when Turkey’s generals, who were hostile to the AKP because of its Islamist roots, still had some sway.

The military leadership has since been supplanted by President Recep Tayyip Erdogan, who concentrated further power in his hands after last year’s failed coup. Erdogan and his generals seem to be in agreement on ditching peace talks with the PKK in favor of a so far elusive military solution to the Kurdish problem. Drones have been assigned a strategic role in the army’s new strategy against the rebels.

Turkey began developing its own drones because of congressional foot-dragging on the sale of US-made armed UAVs.

The Bayraktar, the armed drone currently used by the Turkish air force, is manufactured by the eponymous family-run Bayraktar Group. One of the Bayraktar scions, MIT-trained engineer Selcuk, wed Erdogan’s youngest (and, it is whispered, favorite) daughter Summeye in a lavish ceremony last year. The couple had their first child, a daughter, last month.