In Turkey’s latest salvo against the pro-Kurdish bloc, the parliament has expelled Peoples’ Democratic Party co-leader Figen Yuksekdag, who remains in jail with fellow leader Selahattin Demirtas and at least nine other HDP deputies while the ruling party continues its legal assaults ahead of the presidential referendum. 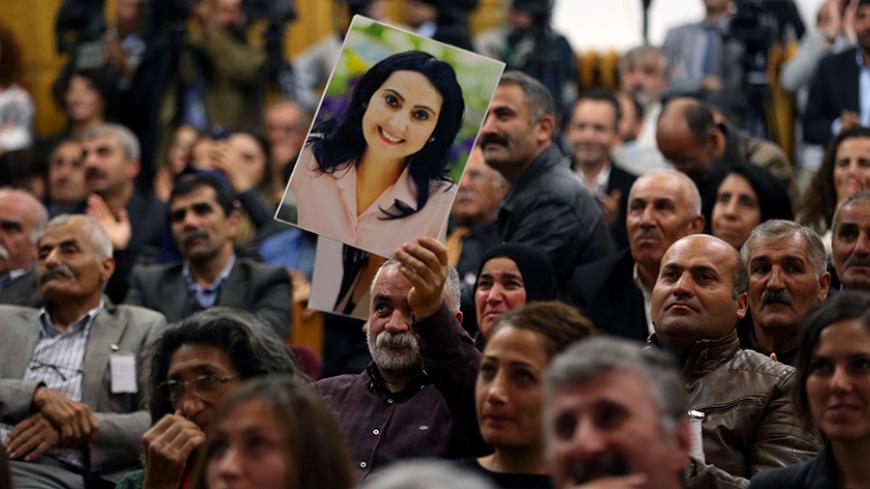 A supporter holds a portrait of Figen Yuksekdag, the detained co-leader of Turkey's pro-Kurdish opposition Peoples' Democratic Party, during a meeting at the Turkish parliament in Ankara, Nov. 8, 2016. - ADEM ALTAN/AFP/Getty Images

Yuksekdag and fellow co-leader of the Peoples’ Democratic Party (HDP) Selahattin Demirtas remain in jail together with at least nine other HDP deputies — their numbers keep fluctuating — on a wide array of often sketchily constructed terror charges. Yuksekdag lost her seat because she attended the funeral of a left-wing militant deemed to be a terrorist.

Idris Baluken, another HDP member of parliament who was intimately involved in now scrapped peace talks between the government and imprisoned Kurdistan Workers Party (PKK) leader Abdullah Ocalan, was rearrested today after an appeals court's objection to his release three weeks ago was sustained. Another court in the eastern province of Dogubayazit, meanwhile, slapped Demirtas with a five-month jail sentence for “insulting the Turkish people, the Turkish state and its institutions.”

The all-out legal assault on the HDP is widely seen as an attempt by the ruling Justice and Development Party (AKP) to win over nationalist voters in the run-up to the April 16 referendum on boosting the powers of the presidency. The HDP is fiercely opposed to the measures that would essentially result in one-man rule.

With his boyish charm, biting wit and oratory flair, Demirtas helped carry the HDP into the parliament for the first time in June 2015 with the campaign slogan, “We will not make you an executive president.” The platform made him the bête noire of Recep Tayyip Erdogan, the Turkish president bent on formalizing the sweeping powers he already wields.

Erdogan, who became the first Turkish politician to sanction direct peace talks with Ocalan, is credited with granting Turkey’s estimated 16 million Kurds greater rights than any of his predecessors combined. But these rights are being steadily rolled back in ways that appear to criminalize any overt expressions of Kurdishness, just as happened during decades of military tutelage that Erdogan helped crush. A sad example played out in the western province of Aydin last week: A group of Kurdish high school students were taken in and grilled by police after fellow students complained that they had been listening to Kurdish music and dancing Kurdish folk dances. The local prosecutor who ordered their interrogation deemed their materials terrorist propaganda. The students were nonetheless set free for lack of evidence, the Turkish-language Hurriyet Daily News reported.

Pressure on the Kurds may well scare many in the battle-scarred southeast of the country away from the ballot box on April 16.

Erdogan and other AKP leaders have openly labeled potential naysayers as “terrorists” and “traitors” and are touting the referendum as a test of patriotism. “The government is bent on keeping the Kurds at home because their votes could well tip the balance,” claimed Sezgin Tanrikulu, a member of parliament for the main opposition Republican People’s Party. Tanrikulu, who is also a globally acclaimed human rights lawyer, told Al-Monitor, “The rights violations that we are currently witnessing in Turkey are on an unparalleled scale.”

Tanrikulu had just petitioned the parliament to investigate allegations of extrajudicial killings and torture in the village of Korukoy near the Syrian border. A curfew was slapped on the village on Feb. 11 as part of an operation to hunt down PKK militants said to be in the area. All access to Korukoy has been blocked, leaving residents trapped inside with dwindling food supplies and allegedly subjected to sustained abuse by security forces.

Feleknas Uca, an HDP member of parliament who was prevented from entering the village over the weekend, asked, “What is the state seeking to conceal in Korukoy?” Uca told the independent ArtiGercek news portal that 65 families live in the village and that there were unconfirmed reports that at least 40 villagers had been detained so far. She also brought up claims that two teenage girls were being held hostage by the security forces. Graphic images said to be shot in Korukoy of the bloodied corpses of men, presumably PKK militants, circulated via social media accounts that were swiftly suspended.

The governorate of Mardin province, under whose jurisdiction Korukoy falls, dismissed the allegations of ill-treament. Contrary to media reports, the operations against the PKK were carried out “in keeping with the rules of the state of law and the protection of civilian lives and property is a priority, ” the governor’s office said in a statement.

Meanwhile, the authorities have detained 26 people said to be linked to a car bomb attack that killed an 11-year-old boy and a guard in the southeastern province of Urfa on Feb. 17. Turkish officials say the PKK, which has escalated urban attacks in recent months, killing security personnel and civilians alike, is the key suspect in the bombing.