A mob attack on the funeral of a prominent Kurdish politician’s mother is seen as an indication of the high level of polarization Turkey has reached. 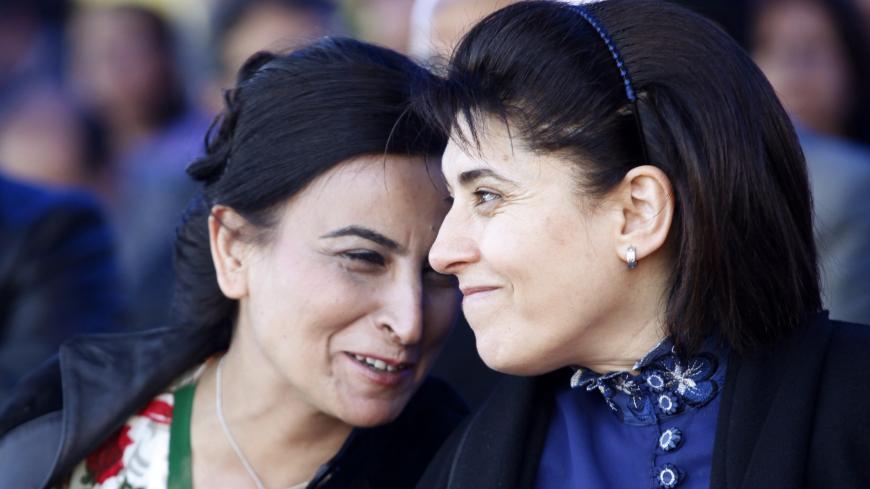 Aysel Tugluk, the deputy chair of the Peoples’ Democratic Party (HDP), is a well-known Kurdish politician in Turkey who is currently in jail on terrorism-related charges, like many other HDP members. But the reason her name made headlines this week was unprecedented.

On Sept. 13, Tugluk received special permission to attend the funeral of her mother, who died while her daughter remained behind bars. Hatun Tugluk had wished to be buried in Ankara's Incek Cemetery, which she could see from a window in her home.

Arriving at the cemetery in a prison vehicle, Tugluk could have hardly imagined that the painful experience of bidding farewell to her mother would turn into an even more harrowing ordeal. While the funeral, attended by this reporter, proceeded, about two dozen people descended on the cemetery, shouting nationalist slogans and swearing they would not allow “terrorists” to be buried there. The group quickly expanded to more than 100 people who tried to force their way into the burial ground. Some wielded sticks and shouted “Allahu akbar,” the Arabic phrase for God is great. They had even brought along a tractor — to remove the body after burial.

Riot police were already on duty around the cemetery since senior Kurdish figures were attending the funeral. Yet the police only issued verbal warnings, despite requests from HDP lawmakers in attendance to physically stop the group.

Some members of the mob, with sticks and stones in their hands, were able to get close to the lawmakers. Though no one was injured, the mourners remained stranded at the scene. The assault was so intense that the Tugluk family decided to exhume the body and take it to their native Tunceli for reburial. The coffin was returned to the funeral vehicle, which was just about to leave when Interior Minister Suleyman Soylu arrived, insisting the burial could still take place there. Yet Hatun Tugluk’s wish for her final resting place remained unmet, as neither the Tugluk family nor HDP lawmakers were convinced that the grave would not be assaulted later.

Their apprehension was not without reason. Since the Kurdish peace process collapsed in 2015, a series of incidents have shown that not even dead Kurds are spared from offense. The 2015-2016 crackdown on Kurdish militants holed up in urban areas in the southeast claimed many civilian lives. Bodies were left in the streets for days and even dragged behind vehicles or paraded on social media.

For HDP lawmaker Mithat Sancar, the incident is the latest episode in a series of attacks over the past two years, targeting not only HDP buildings and activists but also ordinary Kurds such as shopkeepers and workers. He holds the government responsible for emboldening mob violence, which he calls a “lynching culture.”

“Lynching culture is a power technique, an instrument of a governing style and oppression. They lay the ground for it, encourage it and protect the mobs,” Sancar said.

In the past several years, the government “has known no limits” in vilifying the HDP, while “scaling up nationalist bluster,” with pro-government media “amply using hate speech,” he said. “In each and every statement of the government or the interior minister, the HDP is shown as a target and criminalized. What happened at the funeral is the result of all this. By polarizing society so much, by fanning tensions you are in fact encouraging such attacks.”

The incident at the funeral sparked widespread outrage. Countless condemnations filled social media under the hashtag “Hatun Tugluk is mother to all of us,” with a common message of indignation at polarizing politics.

The president's office — which is often the focal point of the anger — also issued a condemnation. The statement didn't come directly from President Recep Tayyip Erdogan but his spokesman, Ibrahim Kalin, who said he was “condemning the incident in the clearest terms on behalf of the presidency.”

The condemnation, however, is unlikely to have appeased either the HDP or the Kurds in general.

Ahmet Turk, a veteran of the Kurdish struggle in Turkey, who has had several stints in jail, the most recent of which ended in February, said, “I’ve been doing politics in this country for 50 years. I have been through a lot of pain and I have witnessed a lot of pain, but never before have I seen something like this.”

The flurry of condemnations is “not convincing” after so much polarizing rhetoric and “does not absolve the government from responsibility,” Sancar said.

Remarkably, the official condemnations tended to emphasize the religious aspect of the incident. Kalin, for instance, said the attack on the funeral “does not comport with our faith, culture and civilization values,” while government spokesman Bekir Bozdag said it went against “our religion and traditions.”

This, however, does not answer the question the Kurds are now asking: If Kurdish mothers cannot be buried in this soil, how are Kurdish children going to live on these lands?