Aysel Tugluk, who defended PKK leader Abdullah Ocalan in his trial decades ago, is now suffering from advanced dementia behind bars, despite widespread calls for her release. 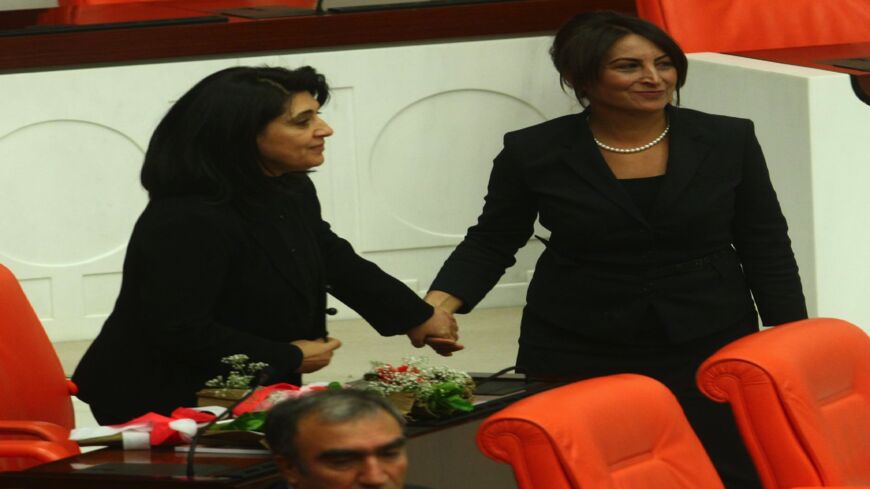 Pro-Kurdish lawmaker Leyla Zana is embraced by lawmaker Aysel Tugluk (R) as she arrives at the parliament in Ankara on Oct. 1, 2011. - ADEM ALTAN/AFP via Getty Images

Aysel Tugluk, a slight brunette with high cheekbones, eagle eyes and long, dark hair, garnered much curiosity during the courtroom trial of Abdullah Ocalan, the outlawed Kurdistan Workers Party (PKK) leader who has been serving a life sentence since 1999 in a prison on Imrali Island off the coast of Istanbul. She was among the more than 50 lawyers defending Ocalan, who was captured in Nairobi, Kenya, in February of that year with the help of the CIA. She was also the most fearless and spirited. This reporter was present at two of the hearings.

Today, 56-year-old Tugluk is languishing in a Turkish jail and serving out a 10-year sentence on specious terrorism charges. She is in the advanced stages of dementia. A shadow of her former combative self, she has severe memory loss and is incapable of tending to her most basic needs. Tugluk must be freed immediately in order to receive proper physical and medical care, which is unavailable in prison. That was the formal opinion delivered by a committee of nine physicians at a government hospital in the western province of Kocaeli in February following seven months of exhaustive testing. However, its opinion was shot down eight months later by the state-run Forensic Medicine Institute (FMI) in Istanbul, which treated her illness “as if it was some kind of a joke and appeared to suggest that she was faking her condition,” said Reyhan Yalcindag, a prominent human rights lawyer who has known Tugluk for 25 years and is part of her legal team. The chief prosecutor’s office ruled that she would remain in jail.

Tugluk’s case is emblematic of the institutionalized cruelty that defines Turkey’s treatment of terminally ill inmates, with the worst indignities reserved for political detainees. The Turkish Human Rights Association says there are 1,605 seriously ill people in Turkish jails. Some 600 are in critical condition, said Ercan Yilmaz, who deals with such cases for the Human Rights Association. By its reckoning, at least 103 of them have died in prison since July 2016 when the government began arresting people by the tens of thousands on suspicion of involvement in the failed attempt to overthrow Turkish President Recep Tayyip Erdogan. “They wait till people have become living corpses in the rare cases that they set them free,” Yalcindag told Al-Monitor. “Soon after, they die."

Under the current system, when the defense appeals to the authorities for their client’s sentence to be commuted, prosecutors refer them to the local government hospital for an assessment. That assessment is, in turn, taken up by the FMI. More often than not, the FMI determines that the case is without merit, as it did with Tugluk.

“One of the things that is striking is the recurrence of the problem in which people get medical reports showing that they have severe health problems that, for compassionate reasons, mean they should be released from prison and that the execution of the sentence be suspended,” said Emma Sinclair-Webb, Turkey director for Human Rights Watch. “Even though they get health reports showing terminal conditions, the [FMI], which is under Justice Ministry control, repeatedly gives reports that say the very opposite so that people continue to serve their sentences.”

“It’s not an independent medical organization. It’s very much connected with the executive, and that is a problem and something that’s been criticized for many, many years,” Sinclair-Webb told Al-Monitor.

In 2018, Erdogan’s ruling Justice and Development Party added another barrier with the introduction of a law stipulating that prosecutors need to seek the opinion of the Directorate of Security as to whether releasing the ill prisoner would pose a threat to public order.

When an appeal for clemency relates to an individual who is in jail on alleged links to the PKK, like Tugluk, the Directorate of Security typically claims that “this person’s family lives in a neighborhood where there is strong support for the PKK. If they are freed, there will be an outburst of euphoria. Masses will gather in the streets; this will be presented as a victory for the terror organization. Chaos will ensue, threatening public safety," Yilmaz told Al-Monitor. “It cites these unfounded scenarios as grounds for refusal.”

Rights groups say that in addition to the FMI, an independent third party should be called in to provide their expertise when legislating the fates of sick inmates. In the hope of setting just such a precedent, Tugluk’s lawyers reached out to the Turkish Human Rights Foundation, an independent body that treats torture victims, for its view on Tugluk. They submitted the foundation's report signed by three doctors — two of whom teach at a state-run university — saying Tugluk was unfit to remain in prison to the chief prosecutor’s office five weeks ago, demanding it should be considered as grounds for reviewing its own verdict.

There are numerous high-profile cases of critically ill prisoners, including that of Mehmet Emin Ozkan, an 83-year-old Kurdish man who was sentenced to life on charges of killing a Turkish general in a case that later proved to be based on fake evidence, forcing a retrial. He’s suffered five heart attacks during his 26 years behind bars, among numerous other afflictions, which now include COVID-19, and he is still awaiting justice.

Tugluk’s plight is particularly heart-rending. She first began displaying symptoms of her illness in 2017 shortly after horrific events unfolded at her mother’s funeral at the Incek cemetery in Ankara. Tugluk was permitted to attend.

A mob of more than 100 stick-wielding men, chanting racist slurs and Allahu akbar (the Arabic phrase for “God is Great”) and shouting they would not “allow terrorists to be buried here,” amassed around the mourners. They had a tractor in tow to remove the body after burial. The family did so themselves and reburied Hatun Tugluk in their native Tunceli.

“Aysel never recovered from the shock. She and her mother were extremely close,” recalled Yalcindag. Tugluk never married, and they shared a house in Ankara that overlooked Incek cemetery where she asked to be interred “so my daughter can be close to me when she gets out of prison.”

Hatun was extremely proud of her daughter’s achievements. A member of Turkey’s long-repressed Alevi faith, she had risen to some of the top positions in the Ocalan-led Kurdish political movement, including as a member of parliament, and as the first female co-chair of a pro-Kurdish political party that was later banned — all cited as evidence against her in a slew of court cases.

Tugluk's life was full of pain and adversity. She was 13 when her elder brother Aytekin, a PKK guerilla, was shot to death in prison in 1979 in murky circumstances. Fellow inmates say it was a prison guard who shot him. Aytekin bore a striking resemblance to his sister.

Tugluk’s sole surviving sibling, a brother, visits her in prison every week. She keeps repeating the same questions to him punctuated by childlike laughs. Until recently, the family refused to publicize her condition on the grounds that the Turkish state would hail this as “a victory against the Kurdish movement.” Though her lawyers declined to comment on this, the family’s stance probably explains why it took so long for them to take action. Without “an enormous public campaign, it’s very hard to get any results,” noted Sinclair-Webb. Ayse Ozdogan, a terminally ill cancer patient who was serving time over alleged links to the Fethullah Gulen sect, was freed in a rare act of mercy on Nov. 26 after a protracted campaign on social media showcasing her plight.