Ayse Ozdogan, an imprisoned end-stage cancer patient, has been denied release, despite a recommendation by a government-run hospital. 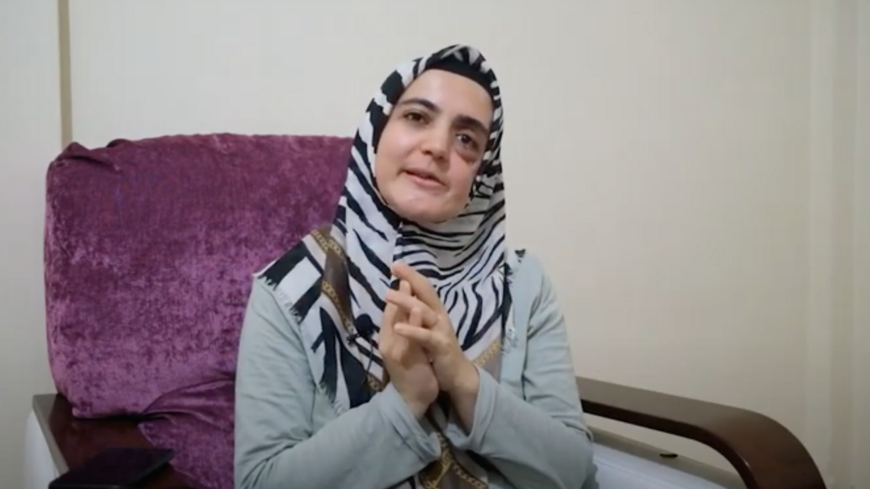 A well-known saying of the Prophet Mohammed intones, “Allah has no mercy for him who has no mercy for his fellows.” It appears to be lost on Turkey’s Islamist Justice and Development Party government. The case of Ayse Ozdogan, an end-stage cancer patient, who is serving a nine-year sentence over her links to an anti-government religious sect, is among the starkest examples. Turkey’s Human Rights Association reckons there are over 1,600 seriously ill inmates in Turkey’s notoriously brutal and overpopulated prison system. About 600 are said to be in critical condition. The government won’t free them.

Ozdogan is suffering from a rare form of cancer called maxillary sinus. A portion of her face was removed in a complex operation on Jan. 2, 2020. A steady trickle of blood oozes from her nose and palate. She can barely speak, according to Ozdogan’s lawyer, Tarik Avsar. “Now Ayse Ozdogan is stuck in a cell even an animal wouldn’t live in, over nonsense charges,” Avsar told Al-Monitor.

“My sister wants to die in dignity. Her health is going from bad to worse. She must be freed,” Ozdogan’s elder sister, Emine Erdem, told Al-Monitor. A government run hospital in Antalya drew the same conclusion in a July 9 report seen by Al-Monitor. A panel of seven doctors unanimously agreed that the patient’s life was under threat and that her sentence should therefore be commuted to allow for treatment. But their verdict was overturned by the state-run Istanbul forensics institute, which opined that Ozdogan’s treatment could continue in jail.  Her appeals for mercy, aired via a heart-wrenching video, fell upon deaf ears. On Oct. 2 Ozdogan was carted off to the Antalya “T type” prison where her husband Ilker, is serving out his sentence on charges of membership of the "Fethullah Terrorist Organization."

The couple have an eight-year-old son who saw his parents arrested multiple times. “We told him they took her for medical treatment,” said Erdem. “He knows something’s not right. He told his mother before she was arrested again, ‘l wish to die as well so we can all be together in heaven.’ He can no longer bring himself to say ‘mother’ or to ask when she is coming back. Each time the word mother comes to his lips he starts to cry.”

Ozdogan and her husband were both followers of Fethullah Gulen, the Pennsylvania-based cleric who is accused of staging the failed attempt in July 2016 to bloodily overthrow Erdogan. She supervised a girls’ dormitory operated by the Gulenists. He was a bureaucrat in the national education ministry. Both were fired after the botched putsch and eventually prosecuted, like the tens of thousands of fellow Gulenists who are behind bars.

Rights groups have documented systematic torture of Gulenist detainees, including at purpose-built black sites. But there is little public sympathy for them. Gulen used to be a close ally of Erdogan until they fell out over who should have more power — and spoils.

Gulen used the alliance to wage a vendetta against their common enemies in the army, through a series of trials that were presided over by his disciples in the judiciary. Hundreds of officers were convicted on sham evidence. “Even today, the Gulenists are resorting to deception, and the bigwigs in the organization who fled to safety abroad have yet to show any contrition for what they did, causing further harm to the foot soldiers who got left behind in Turkey,” said Ayse Cavdar, a Turkish anthropologist who closely follows religious movements in her native country.

However, Ozdogan’s tragedy has stirred hearts across the ideological spectrum.  A lawmaker from the stridently pro-secular main opposition Republican People’s Party, Gulizar Bicer Karaca, sought to visit her in prison but was denied access by prison administrators citing COVID-19 risks. Basak Demirtas, the wife of the imprisoned Kurdish leader, Selahattin Demirtas, aired support for Ozdogan via Twitter while the left-leaning satirical weekly Leman, put her on its cover page.

“You have a chronic problem of very, very sick people for whom the prognosis is very poor. They can’t look after themselves in prison. There are humanitarian grounds for postponing the execution of their sentences,” said Emma Sinclair-Webb, Turkey director for Human Rights Watch.

Sinclair-Webb recalled the plight of Mehmet Emin Ozkan, an 83-year-old Kurd, who was sentenced to life on charges of murdering a Turkish general in a case that was marred by flawed if not outright fabricated evidence. He’s spent the past 26 years in prison for a crime that was committed by Turkey’s shadowy counter-insurgency forces, according to a pair of secret witnesses who gave evidence in a separate trial. Ozkan’s demands for a retrial were granted. But he was not set free.

Ozkan has had five heart attacks over the course of his incarceration and suffers from numerous health conditions. He is unable to eat, drink or dress himself unaided. Images of Ozkan lying handcuffed to a hospital bed earlier this year caused uproar. Turkey’s Justice minister, Abdulhamit Gul, has ignored repeated calls for Ozkan’s release. “It’s obvious he is not going to abscond or flee. This is an area where the authorities are at their most vindictive,” Sinclair-Webb observed.

Avsar, Ozdogan’s lawyer, will appeal her sentence at the constitutional court on the grounds that her right to life has been violated. Should the court rule against Ozdogan, in a replay of other high-profile political cases, Avsar says he will take the case to the European Court of Human Rights.

The Strasbourg-based body ruled in 2013 that Turkey had violated Article 3 of the European Convention on Human Rights prohibiting inhuman and degrading treatment of individuals for remanding Gulay Cetin, an auditor diagnosed with metastatic gastric cancer in custody. Cetin, who was accused of murdering her partner, died in the prison ward at Antalya hospital in 2011.

Omer Faruk Gergerlioglu, a prominent human rights defender and lawmaker for the pro-Kurdish People’s Democratic Party, who has taken up Ozdogan’s cause noted that sick prisoners are released only when they have "reached the point of no return.”