As the Sept. 25 referendum approaches, Ankara seems to be toughening its stance against Iraqi Kurdistan's independence move, while a mob attacked the funeral procession for the mother of a Kurdish politician. 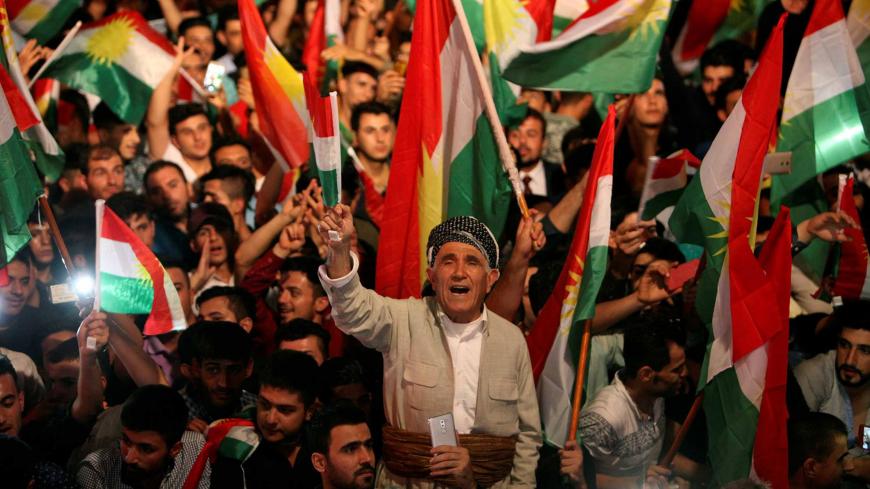 Since the Kurdistan Regional Government (KRG) announced in June that it will hold a referendum on declaring independence from Iraq, the Turkish government has maintained a coolheaded approach — until now. As the Sept. 25 referendum approaches, Ankara seems to be toughening its stance against Iraqi Kurdistan independence.

The Turkish Foreign Ministry posted a press release on its website Sept. 14 supporting the Iraqi parliament's Sept. 12 resolution rejecting the KRG’s vote on independence. The ministry release read, “We welcome the decision taken by the Iraqi Council of Representatives … as the clear expression of the importance given to Iraq’s political unity and territorial integrity and we strongly support the said decision.”

The statement added, “Despite the warnings of Turkey and all the members of the international community who act with common sense, we are concerned by the KRG leadership’s persistence and its increasingly emotional statements on the referendum. We would like to stress that [the] KRG should keep in mind that continued insistence on carrying out this referendum despite all the friendly advice to the contrary shall have a cost. In that regard, we invite the KRG to act with common sense and to give up its erroneous stance.”

An interesting aspect of the media coverage of the Foreign Ministry statement is that even though the statement used the more neutral phrase “shall have a cost,” Turkish and regional news outlets have claimed Turkey threatened that the KRG “will most certainly pay a price” if it goes ahead with the Sept. 24 referendum. Turkey’s governmental-owned news organization TRT, the country’s pro-government media and the Iraqi Kurdish news outlet Rudaw all used the tougher wording, which interestingly does not exist in the English-language version of the Foreign Ministry announcement. The Turkish version of the press release is even less threatening than the English version.

To be sure, Ankara publicly opposes both the referendum and the idea of an independent Kurdistan. But as Al-Monitor columnist Amberin Zaman’s stories show, Turkey’s position swings from outright opposition to the referendum to tacit support and private nods for the KRG asserting its position in the region. KRG President Massoud Barzani told Zaman in March 2016 that the ruling Justice and Development Party is the only Turkish government that could ever acquiesce to an independent Kurdistan.

At any rate, Iraqi Kurds’ bigger problem is not Turkey or Iran or the United States or even the central government in Baghdad, but the political divisions among themselves. If anything, events in the run-up to Sept. 25 will complicate rather than resolve the problems facing the Kurdistan Region and the rest of Iraq.

Disrespect for the dead

In more tragic and foreboding news for Turkey, a mob attacked the funeral procession of the deceased mother of a Kurdish politician in the capital, Ankara, on Sept. 13. Aysel Tugluk, the deputy co-chair of the predominantly Kurdish Peoples’ Democratic Party (HDP) who has been in detention since December, was temporarily released to bury her late mother, Hatun Tugluk. At the funeral, she and other HDP members faced an ultranationalist mob that apparently yelled, “This is a Sunni cemetery. Alevis cannot be buried here. This is Turkish soil, not Armenian. We do not want Armenians here.” News reports pointed out that police units at the scene initially did not intervene. The furor got so bad that the buried body had to be exhumed and taken away to be interred elsewhere.

Karabekir Akkoyunlu, an assistant professor at the University of Graz in Austria, told Al-Monitor that such incidents are reminiscent of the tragic events of Sept. 6-7, 1955, when ultranationalist mobs carried out pogroms against the Armenian, Greek and Jewish communities in Istanbul. “Recently, on the anniversary of Sept. 6-7, people shared memes that read, ‘Crimes that are not investigated will be repeated.’ But by tolerating evil acts and covering them, we have created a gang that could spew such hatred to a funeral. … Although the government is the source of the hatred, certain elements of society have internalized this degeneration. And this is threatening our ability to be a society.”

Akkoyunlu tweeted, “Such intense hatred, just like a black hole, will suck up all the light, energy and life around it and destroy it until it collapses on itself.”

In all fairness, the Turkish authorities have opened an investigation into the heartbreaking affair and the presidency has condemned the attack. But empty political statements will not be enough for Turkey to bring back the barest amount of decency and respect for the dead.