Why are Turks flocking to Greece?

A combination of economic, social and political factors has led to a significant increase in the number of Turks vacationing in Greece. 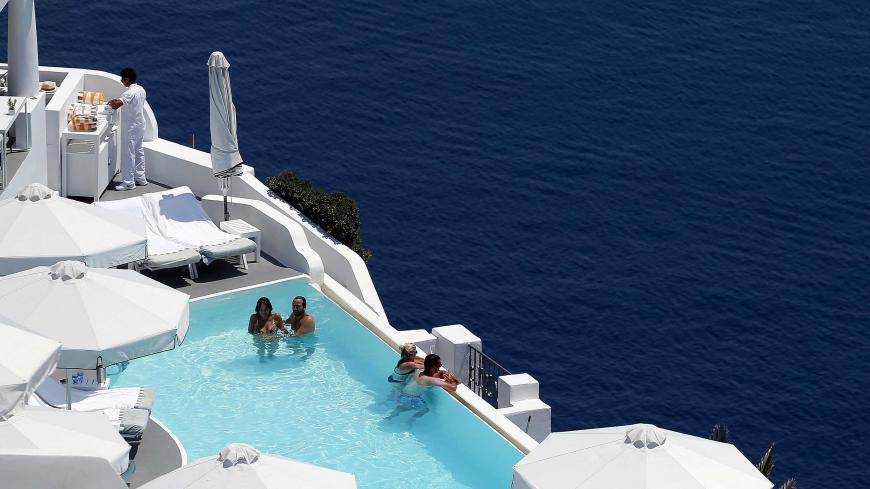 Tourists relax in a private swimming pool in the village of Oia on the Greek island of Santorini, Greece, July 1, 2015.

ANKARA, Turkey — At a time when Turkey’s tourism sector is struggling, the number of Turks flocking to Greece has risen extraordinarily, a trend that many believe is driven by both economic and political factors.

Scrambling to boost its tourism industry, Ankara last month decided to extend the four-day Eid al-Adha holiday to 10 days, but the move seems to have benefited the Greek tourism sector as well. Out of the 1 million Turks who went on holiday during that period, 10% flocked to nearby Greek islands and other touristic sites in the neighboring country. The island of Lipsi, for instance, welcomed as many Turks as its own population of 600 people.

The Greek consul in Turkey’s Aegean city of Izmir is more than happy with the boom. “Increasing the number of tourists mutually is one of our major goals,” Argyro Papoulia said in a recent interview, noting that close to 1 million Turks traveled to Greece last year. Bilateral trade has also progressed, he said, adding, “Our goal is to advance together as partners and develop peaceful ties.”

According to figures from border crossing and customs authorities, some 117,000 Turks crossed to Greece by road and sea during the 10-day holiday; however, that figure does not include those who used railroads and air travel. Turks are estimated to have spent at least 500 million Turkish lira ($145 million) in Greece during the said period.

Between Aug. 25 and Sept. 2, up to 3,000 vehicles crossed daily from Turkey’s two land crossings with Greece in the northwest, compared to an average of about 500 on normal days. Thousands of other Turks descended on the Greek islands in the Aegean by ferries and boats from the coastal towns of Cesme, Ayvalik and Kusadasi.

Timur Bayindir, the head of the Turkish Hoteliers Union, believes Turks have become a crucial touristic clientele for Greece, faulting the Turkish tourism industry for fueling the trend. “Local tourists are not very happy with the services in crowded resorts” in Turkey, he said. “There [in Greece], they believe, the prices are not inflated and they are not being ripped off [while] such complaints are frequent in [the Turkish resorts of] Bodrum and Alacati, for instance. So people flee to the nearby [Greek] islands.”

The Greek daily Kathimerini reports a particular boom in Turkish visits to Greek islands, some of which are a stone’s throw from the Turkish coast, with some islands recording increases of more than 200% this summer. The paper quotes a travel agent, who is additionally happy that Turks are not cheapskates. “Tourists from Turkey are usually families. They come for three days and live it up. They aren’t stingy. They spend a lot, up to 200-250 euros [$238-$297] per person a day, because they eat out and go shopping,” the travel agent said.

What is driving the Turkish love for Greek holidays, given that Turkey itself is a major tourist destination with modern resorts dotting its Mediterranean and Aegean coasts?

The first reason is economics, as accommodations, dining and entertainment are often cheaper in Greece. This is particularly true for alcoholic beverages, which have seen the steepest price hikes in Turkey since the Justice and Development Party came to power 15 years ago. The government has levied huge taxes on alcohol, leading prices to increase by 400%-500%, including the national drink raki. As a result, booze has become a luxury for the ordinary Turk, and many have turned to domestic raki production with amateur means. Moreover, selling alcohol has been banned after 10 p.m. since 2013, with violators facing heavy fines.

Another significant factor stems from social pressures that Turks with liberal lifestyles have come to experience under a government promoting conservative worldviews. Harassment and attacks against women wearing shorts or miniskirts have become a growing phenomenon in urban centers, while some alcohol-serving restaurants and bars have closed down after threats.

Former Tourism Minister Bahattin Yucel believes the growing Turkish attraction to Greece should serve as a warning to both Turkey’s tourism industry and government. Despite its economic hardships, Greece will continue to lure Turkish tourists with its “Western-standard democratic rights and freedoms,” Yucel wrote, describing Greece as a country free of “alcohol bans and token moralism that interferes in how people dine and dress.”

The Greek islands’ ability to preserve their traditional, natural fabric is another factor that lures visitors seeking to relax — unlike the high-rises springing up on Turkey’s shores at the expense of green spaces and historical heritage.

With all of this, it’s no wonder that one of Turkey’s largest business groups, Dogus, has begun to shift its tourism investments to Greece, Croatia and other countries on the Mediterranean and Adriatic coasts. Many other companies in the tourism sector are doing the same.

The bright side is that the trend is strengthening the bond between the Turks and Greeks, whose history is marked by both cohabitation and bloodshed. Just as Greeks flocked to Turkey to shop for cheap goods at the height of their economic crisis, Turks looking to enjoy some respite and freedom are now knocking on the door of their closest neighbor.

Correction: Sept. 14, 2017. Due to an editing error, an earlier version of this article indicated that the Greek island of Lipsi has a population of 600,000. Its population is 600.