Trump said the people of Iran want change in his debut address to the UN, but his advisers insist regime change isn’t on the table. 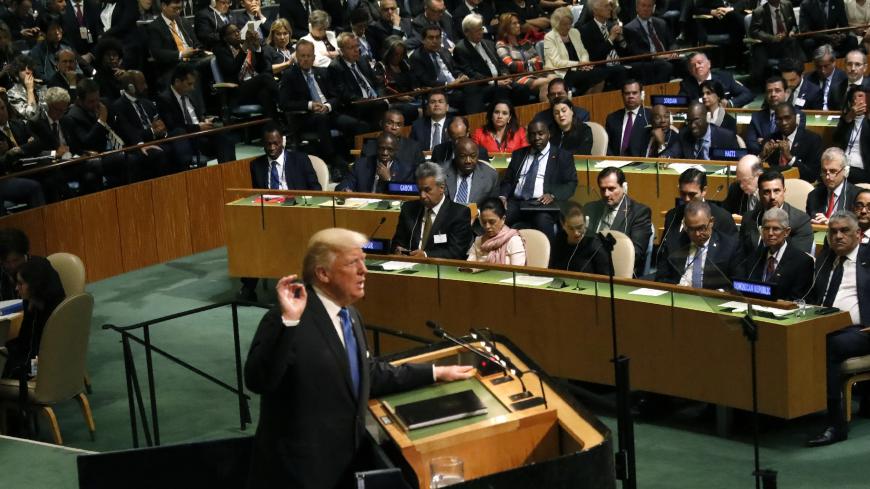 NEW YORK — US President Donald Trump, in his debut address to the United Nations today, lumped Iran in with North Korea as a “rogue regime.” His call for the world to shun Iran clashed sharply with other parts of his speech, where he repeatedly focused on sovereignty and made no mention of the repression of autocratic US allies such as Saudi Arabia.

“The entire world understands that the good people of Iran want change, and, other than the vast military power of the United States, that Iran's people are what their leaders fear the most,” Trump said. “This is what causes the regime to restrict internet access, tear down satellite dishes, shoot unarmed student protesters and imprison political reformers.”

In a lengthy speech that sought to reconcile his nationalistic “America First” credo with international cooperation symbolized by the UN, Trump said the United States did not seek to impose its system of government on other countries.

“In America, we do not seek to impose our way of life on anyone, but rather to let it shine as an example for everyone to watch,” Trump said, describing his foreign policy approach as "principled realism."

But Trump’s emphasis on nation-state sovereignty — the president mentioned “sovereignty” or “sovereign” 21 times — and his realism about how other nations choose to govern themselves did not extend to Iran, Venezuela, Cuba and North Korea. About a tenth of his 4,500-word speech was focused on Iran.

“We cannot let a murderous regime continue these destabilizing activities while building dangerous missiles, and we cannot abide by an agreement if it provides cover for the eventual construction of a nuclear program,” Trump said.

Calling the Iran nuclear deal forged by his predecessor Barack Obama and five other world powers “an embarrassment to the United States,” Trump vowed, “I don’t think you’ve heard the last of it — believe me.” This was evidently a reference to his decision next month on whether to certify to Congress that Iran remains in compliance with the deal.

“It is time for the entire world to join us in demanding that Iran's government end its pursuit of death and destruction,” Trump said. “It is time for the regime to free all Americans and citizens of other nations that they have unjustly detained. And above all, Iran's government must stop supporting terrorists, begin serving its own people and respect the sovereign rights of its neighbors.”

The speech was greeted coolly by the audience, with the exception of Israeli Prime Minister Benjamin Netanyahu, who applauded during Trump’s bashing of the Iranian nuclear deal. Netanyahu later raved on Twitter that Trump’s address was one of the strongest speeches he had heard in 30 years.

Jared Genser, a lawyer for the imprisoned Namazis, said the elder Baquer Namazi underwent surgery today to install a pacemaker, and was notified that he will be returned shortly to Evin Prison. Babak Namazi, Baquer’s son and Siamak’s brother, said his family is worried about his father’s deteriorating health.

“My family is rapidly running out of time. My father's health situation is dire and I am horrified that he is being returned from a major surgery to recover in Evin Prison,” Babak Namazi said in a statement today. “I urge the president to spare no effort to bring my family home.”

US Secretary of State Rex Tillerson will have a chance to bring up the Namazi case and Trump’s larger agenda when he is expected to have his first encounter with his Iranian counterpart Mohammad Javad Zarif on Wednesday evening on the sidelines of the General Assembly meeting. The two men are both scheduled to attend a ministerial meeting of the eight-body Joint Commission overseeing implementation of the Iran nuclear deal, along with representatives from the UK, France, Germany, China, Russia and the European Union.

Already, Zarif has made it clear that Tehran flat-out rejects Trump’s bellicose rhetoric.

“Trump's ignorant hate speech belongs in medieval times — not the 21st Century UN — unworthy of a reply,” Zarif tweeted after Trump’s speech. “Fake empathy for Iranians fools no one.”

“The US is seeking to change the regime’s behavior,” a senior administration official, speaking not for attribution, told journalists on a call last week. The United States wants the Iranian government to “not do cyberattacks, to stop proliferating weapons to militant proxies to use against us and allies, to stop human rights abuses, to stop destabilizing neighboring governments and to stop supporting international terrorist groups such as Hamas.”

“We want to see changes in the Iranian regime’s behavior,” the senior administration official said.

But some Iran scholars say Trump’s remarks will be seen in Iran as validation of hard-liners’ argument that Washington will never accept the Islamic Republic. They worry that Trump’s verbal attacks on the regime will only reduce the political space for more moderate figures such as President Hassan Rouhani who seek to engage with the West.