Children ripped from their homes in Russia and secreted off by relatives said to be fighting for the Islamic State are now turning up abandoned in the Middle East. 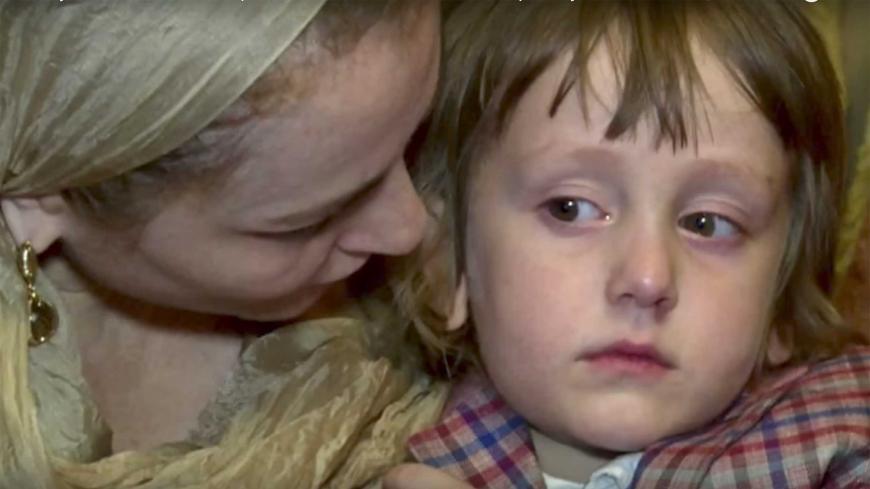 Chechen boy Bilal Tagirov is seen in a video still after being reunited with his family after having been found wandering alone in Mosul, video uploaded Aug. 3, 2017. - YouTube/RT

Four-year-old Bilal Tagirov is looking at his mother but can’t recognize her. He spent the past two years in Syria and then Iraq with his father, who allegedly was fighting alongside Islamic State (IS) terrorists. According to Zaliha Ashahanova, Bilal’s mother and a Chechnya resident, the boy’s father abducted him in 2015.

For more than two years, Ashahanova has been trying to locate the boy. Bilal was found in Mosul in mid-July by Iraqi troops.

A video shot by the soldiers shows the boy wandering alone through the flashpoint city. When he sees the Iraqi flag, he identifies it as belonging to unbelievers. When WhatsApp users spread the video of Bilal, his mother saw it and recognized him. On Aug. 2, 4-year-old Bilal arrived safely home.

“I can’t say at the moment how I feel. Of course I’m happy. I don’t even know how to express my gratitude, because I didn’t think that I would see this day and that it would come so soon,” his mother told reporters.

Bilal is one of dozens of Russian children found by Iraqi troops in Mosul. In early August, Russian state TV network RT published a report that at least 48 Russian children are being held in different Iraqi shelters. Some of them speak Russian, while others know only Chechen. The children were brought to Iraq by parents who came to join IS radicals. Others were born in Iraq. Most of these children know very little about their origins. Some of them have broken legs or hands or other injuries because they were abandoned by their parents and had no medical attention for a long time.

Controversial leader Ramzan Kadyrov, appointed by Russian President Vladimir Putin to head the Republic of Chechnya, helped organize the search and rescue operation for Bilal. Kadyrov, who sometimes counters his reputation for brutality with humanitarian acts, is playing a significant role in the process of returning Russian children home. Last month he helped Russian resident Sergey Ukhanov bring home his 6-year-old daughter Lisa, who was allegedly kidnapped by her mother. Turkish officials detained the family, which it said was trying to cross the Syrian border to join IS. On Aug. 4, Kadyrov said on his Telegram channel that his representatives had visited the Al-Salihiya orphanage in Baghdad, where six presumably Russian children had been found, as Russia’s TASS news agency reported.

Recently, Kadyrov noted he would ask the Russian Defense Ministry to provide “safety corridors” in Iraq and Syria to let women and children leave battle zones. He also emphasized that Chechnya had agreements with Iraqi, Syrian and Kurdish authorities on effective recovery of children from conflict areas.

Kadyrov cultivates a reputation for helping the needy and sick, according to Ekaterina Sokirianskaia, a Russian researcher and a former North Caucasus project director for the International Crisis Group. She told Al-Monitor, “For some people, appealing to the Chechen leader for help is a sort of ‘last hope.’ Millions of people follow his social media accounts, and his popularity is visibly growing.”

According to Sokirianskaia, Kadyrov is leading a rather independent policy in the Middle East, where he is friends with some leaders.

The head of Chechnya has good relations with authorities in Jordan, where a big Chechen diaspora is located. Sammie Beno, a Jordanian politician of Chechen origin who heads the Chechen Republic’s Friends Association in Jordan, is helping with the evacuation of Russian children from Iraq and Syria. He mediates during talks between representatives of different countries and international public organizations.

“To bring the children back, it must be confirmed they are all Russian citizens, which is not easy, as the minors lack documents proving their identity and can hardly tell the authorities anything about themselves or their families, aside from a name,” Beno told RT.

Nevertheless, Russian human rights activists claim there are hundreds of Russian children in conflict zones in the Middle East, including Syria and Iraq. Most of the children are from Russia’s North Caucasus regions of Chechnya and Dagestan. According to Russia’s children’s rights ombudswoman Anna Kuznetsova, Dagestan accounts for more than 200 children, but the unofficial figure of children illegally taken out of Russia is much higher. “We have created a database of almost 350 names and addresses, contacts. It covers the whole territory of Russia — Ulyanovsk, Rostov, all the regions that you can think of. The majority [of children] are residents of Chechnya and Dagestan,” Kuznetsova told Russian media sources after a meeting on the issue. The meeting was attended by envoys from Syria and Iraq, as well as representatives of Dagestan, Chechnya, the Russian Foreign Ministry and the commissioner of the children’s rights office.

Mariam, 10, was found in a Baghdad orphanage. She told Russian TV that her mother was shot dead and her father disappeared. After the girl’s story appeared in the media, Mariam’s grandmother, a Dagestan resident, recognized her and contacted local authorities. According to the woman, Mariam’s parents took her from Dagestan in 2014. From time to time the girl’s parents sent photos and videos of Mariam and two boys, Mariam’s siblings who were born in Syria. To bring Mariam home, her grandmother needs to confirm that the girl is a Russian citizen, providing all the necessary documents. In the case of the woman’s grandsons, the situation is more difficult — the children were not born in Russia and formally have no documents.

Dozens of Chechen women marched Aug. 15 in Grozny, the republic’s capital, appealing to authorities to get involved, chanting “Help bring our children home!”

Most of the women were mothers, grandmothers and other relatives of children who are being found in Iraqi orphanages. Getting these children back is a complicated process, as the children will have to undergo DNA testing to prove they are related to the people who claim them. The marching women, however, are holding on to their hope.