Mohamed Badarne has trained his lens on the children from unrecognized villages in the Negev. 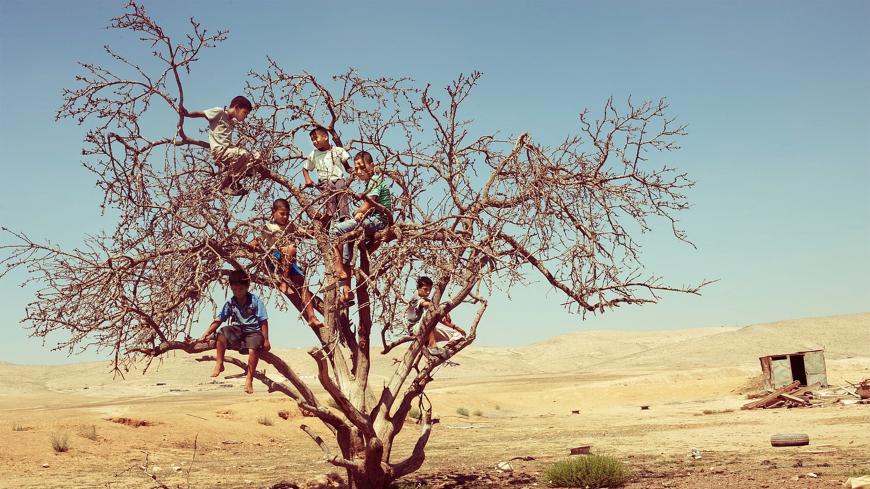 GAZA STRIP, Gaza City — Six children sit amid the leafless branches of a tree in an arid, barren landscape, a small weary-looking shed in the distance. The image, a photograph by Mohamed Badarne, is part of “Unrecognized Games,” a series featuring children from the 45 unrecognized villages in Israel's Negev Desert, where more than 75,000 Bedouin live. Badarne told Al-Monitor that he wants to pose one key question through his work on the Bedouin: “Why is Israel destroying Negev villages?” Answering his own question, he replied, “Israel wants to eliminate the Palestinian presence from the pre-1948 territories.”

The term “unrecognized village” stems from Israel’s refusal to recognize Bedouin ownership of the land on which they have settled in the Negev, where they have had a presence since the seventh century, well before Israel's establishment. As the Bedouin lack deeds or documentation of ownership, Israel refuses to provide their settlements with public services — that is, water, electricity, waste disposal and education and health facilities. In addition, the Bedouins' homes are under the constant threat of demolition, because Israel considers them to have been illegally built. For instance, on Aug. 31, Israeli authorities used bulldozers to destroy containers used for storage as well as olive trees in several villages.

In 2011, the Israeli government approved the Prawer Plan, which aimed to move thousands of Bedouins, against their will, from their villages and resettle them in urban communities. The Bedouin, who live a semi-nomadic lifestyle, opposed the plan, emphasizing their historical ownership of the land. The United Nations has been calling on Israel to “recognize and respect the specific rights of its Bedouin communities, including recognition of Bedouin land ownership claims.”

Life in the Negev, given the absence of public services and the state's destruction of personal property, is insecure and tough, but the children Badarne has photographed have nonetheless managed to turn their surroundings into a playground: They climb trees; they play with the remains of broken or discarded objects; they run around on the sandy stretches of land and amuse themselves in front of a broken television set.

“Children make toys out of nothing. They create their own heaven among the rubble,” Badarne remarked. “I watched children playing atop power generators, knowing that they have no electricity to begin with.”

“Children make toys out of nothing. They create their own heaven among the rubble,” Badarne remarked.

Badarne visited the Negev on numerous occasions between 2013 and 2015 and built relationships with the people he photographed. “The photos focus on Negev children and aim to show the struggle to survive despite the difficult living [conditions],” Badarne said. “These candid shots are to try to create local and global awareness about the situation in the Negev.”

“Unrecognized Games” was shown in Gaza City in March 2015, shortly after Badarne finished working on the series. “The same Israeli hand is destroying Gaza and Negev,” is how he described the aim of the exhibit there. In June 2016, the work was mounted in Berlin as part of the opening of Palestinian Days, an annual festival organized by the Committee for Solidarity with Palestinians. The artist also displayed the photographs this April during Israeli Apartheid Week in Doha. The series will travel to Belgium for an exhibition, beginning Oct. 2, organized by the Committee for Solidarity of Palestinians and the Municipality of Brussels.

Badarne was born in 1978 in the village of Arraba, in the Galilee. He has volunteered in refugee camps in the West Bank, where he organized a human rights movement with the young Palestinians living there. Until 2012, he earned a living as a high school teacher and as a project coordinator for a nongovernmental organization in the region. He then decided to devote his time to photography, offering workshops to aspiring photographers as well as taking photos of his own.

Badarne has assembled a large portfolio of images of the many aspects of Palestinian life, from children who work on the streets to the daily life of construction workers. Badarne remarked, “My aim is not to [just] take photos, but to create a narrative with them and use photography to cast an eye on the unseen, under the slogan of ‘art for change.’”

Displaying his photographs abroad, Badarne said, has helped raise awareness of the Palestinian cause, and he hopes that it has increased support for it. “This is what it means to mobilize art and use it to serve national interests,” he said, adding that such shows inform people that the Palestinians are not only concentrated in the West Bank and the Gaza Strip, but also living in Israel, including the Negev. “My aim is to ensure that humanity, rather than injustice, dominates Palestinian lands.”

Hussam Salem, a Palestinian photographer from Gaza who has worked with Badarne, praised his work in “depicting reality through his photos and helping Palestine.” He told al-Monitor, “A picture is worth a thousand words.”

Salem believes that Badarne’s images, like those of other Palestinian photographers, show that life is worthwhile despite all its attendant difficulties. “A simple photo with a human touch satisfies you and reflects the concerns, happiness and sadness of that forgotten person in an unrecognized village. It gives them a voice.”