How Islamic State is undermining peace prospects in Libya

As Libya’s rival parties are moving forward toward a political solution, it seems that the Islamic State and other extremist organizations are re-emerging on the internal scene in a bid to torpedo any such efforts for peace. 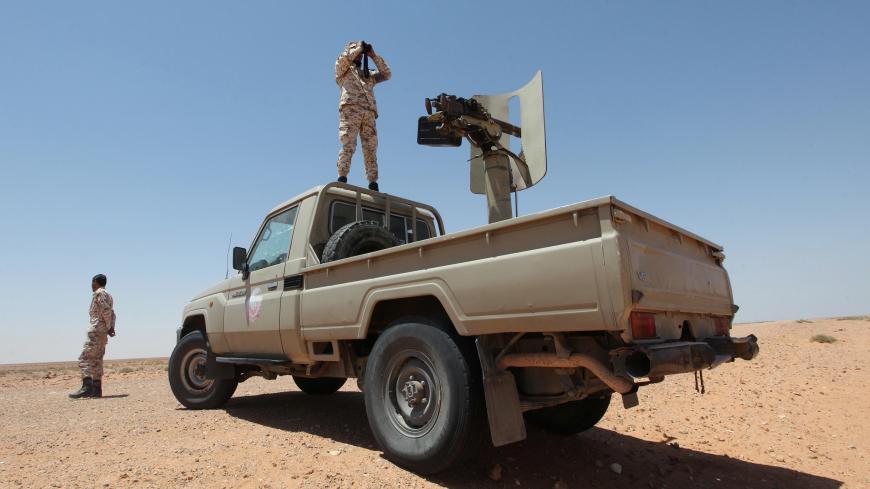 The Islamic State (IS) reappeared in Libya almost a year after it was ousted from its stronghold of Sirte on the Mediterranean coast. In a video clip released Aug. 28 by IS’ Amaq news agency, two fighters appeared at an ad hoc checkpoint on the highway heading south of Sirte toward Jufra. In the same video, Sagayar Majri, a lawyer and former vice chairman of Libya’s High National Election Commission, who was kidnapped May 25, briefly appeared appealing for help.

On Aug. 23, IS claimed to have attacked a military checkpoint run by the Libyan Armed Forces (LAF), headed by Gen. Khalifa Hifter, killing nine soldiers.

According to eyewitnesses who spoke to Al-Monitor, it is not the first time IS fighters appear in the area around Sirte after they lost the city. Abobaker Agnon, the owner of a radio station in Tripoli, visited the area in December after IS was ejected from Sirte. He was almost killed at a random checkpoint setup by IS, but he survived thanks to his speedy exit in the area familiar to him. “A friend told me the checkpoint ahead of me is manned by IS, so I had to drive very fast,” he said. Locals also reported seeing IS fighters in the desert region south and southwest of Sirte.

While IS was ejected from Sirte last year, the organization is still active in the region around the city and the neighborhoods where large swathes of desert are not under government control.

IS as well as other factions in western Libya appear to be stirring up trouble whenever an imminent agreement among Libyans appears on the horizon.

However, this latest IS appearance in the area seems to be for propaganda purposes and interrupting the political process, as it gains new momentum due to a string of recent positive developments and diplomacy.

On May 2, Hifter, backed by Libya’s Tobruk-based parliament, met with Fayez al-Sarraj, the head of the United Nations-backed Government of National Accord (GNA), in Abu Dhabi for the first time since 2015. The meeting generated hope that the two sides might be on the way to reach a political settlement in the country.

During the meeting, the two men, suspicious of each other’s intentions, verbally agreed to a cessation of all hostilities and to build trust and settle any issues without resorting to force. However, on May 19, forces loyal to the GNA and acting on the order of its defense minister, Mahdi al-Barghati, attacked a military air base in Brak al-Shati in the desert, killing over 140 people — most of whom were soldiers loyal to Hifter. The LAF did not respond but rather used the attack to reaffirm its belief that the GNA does not have any control over the forces claiming loyalty to it.

Sarraj was angry but could not do much since his powers over the GNA and the forces acting on the ground are nominal. But on May 19 he suspended Barghati and promised an investigation. Nothing has been published of that investigation so far.

The latest attempt to prevent any agreement that could reconcile the war-ravaged country came after the Paris meeting hosted by French President Emmanuel Macron on July 25 between Hifter and Sarraj. The meeting, the most serious between the two, produced what could be termed as a road map for Libya that stipulated national presidential and legislative elections, reconciliation and unifying state institutions.

Particularly important is the wide European support the agreement received from key European Union countries, including Italy and the United Kingdom.

It seems obvious that any agreement among the rival Libyan factions means less political and security vacuum that IS and other similar organizations can capitalize on and re-establish themselves in the country, particularly after they lost Benghazi to the LAF earlier this year.