Israel unsure about 'day after' Abbas, and even 'day before'

The latest Israeli intelligence assessment raises concerns about explosions of violence not only in Gaza, but also in the West Bank in light of the diplomatic stalemate and uncertainty surrounding President Mahmoud Abbas' remaining time in office. 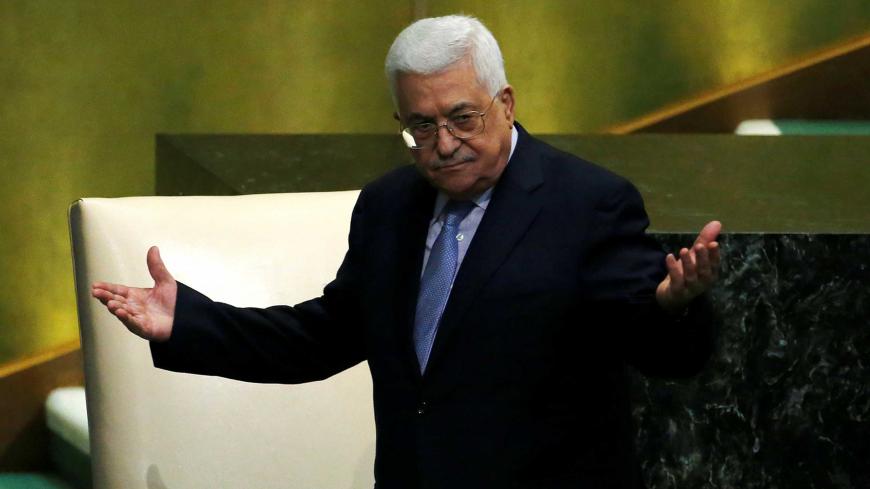 In recent years, the working assumption of the Israeli security establishment has been that there is not enough negative energy among Palestinians in the territories that could lead to an eruption of grass-roots violence along the lines of the first and second intifadas. The moderating agents that operate against this kind of violence have been stable: Palestinian President Mahmoud Abbas’ rule, which from the start opposed the use of violence; the growing strength of the Palestinian security apparatuses, which enforce law and order throughout the West Bank; and primarily the Tanzim, the largest armed Palestinian organization, remaining outside the circle of violence and under the control and restraint of Abbas.

Recent months, however, have seen a fundamental shift in this assumption.

The intelligence branch of the Israel Defense Forces (IDF) and its head, Maj. Gen. Herzl Halevy, presented a strategic warning to the Cabinet a few months ago about the possibility of all-out violence erupting on the Palestinian front. The warning reappeared Sept. 25 in the yearly intelligence assessment report distributed to military correspondents.

After years in which the heads of the Israeli security and intelligence branches repeatedly said that the stabilizing and moderating agents on the Palestinian front are much stronger than the inciting agents, the impression now is that a reversal is taking place in front of our eyes. True, it is happening slowly, and it is still reversible, but it cannot be denied that the prediction of a third intifada or another round of violence between Israel and Gaza is gaining traction in Israel’s higher echelons.

It seems that the main reason for a violent eruption is rooted in Gaza. The deteriorating humanitarian situation there, plus the imminent completion of the enormous underground wall that Israel is constructing — which will almost completely neutralize Hamas’ cross-border tunnel threat — light up all the warning lights on the Israeli side. The person primarily responsible for raising the alarm regarding the situation in Gaza has been, and remains, Gen. Yoav Mordechai, coordinator of government activities in the territories.

In 2017, as opposed to previous years, it is not only Gaza on the warning list, but the West Bank, or Judea and Samaria to the Israelis, is also considered in danger of an eruption. Ironically, now that the so-called individual intifada has been halted, worry on the Israeli side is only intensifying. It is not the terror attack in Har Adar on Sept. 26 that is worrying to Israeli security. That shooting, carried out by a Palestinian who worked for years in the Israeli settlement where he carried out the attack, is viewed as anomalous. The real problem is the forces bubbling under the surface.

The warning signs all concern Abbas, the eternal Palestinian leader. Abbas is the current elephant in the middle of the Israeli-Palestinian living room. He is 82 years old, in poor health and rather depressed in spirit. His diplomatic horizon is narrow, and his options are decreasing, one by one. Israel — despite all its intelligence agencies, experts and capabilities — does not know what the “day after” will look like. As far as is known, the few discussions on the issue have thus far been paltry and inadequate, without a point. No one in Israel has any idea who will step into Abbas’ shoes when the day comes, whether the Palestinian Authority will fall apart and descend into chaos or who or what will take control of the territory in filling the inevitable vacuum.

Israel is not only worried about the day after, as even the “day before” — the last leg of the elderly Palestinian leader’s journey, in other words, these very days — raises numerous questions and presents unsolvable conundrums. The more time that passes, according to Israeli assessments, the less Abbas has to fear and the less he has to lose. Thus, he can allow himself to be more daring. All the calculations and considerations of the past are disintegrating. Anything that happens now will be designed to create an “Abbas legacy” for future generations. What might possibly happen, according to Israeli sources? Abbas might lose his discretion, sense of judgment or his cool. He might gather his strength or just lose interest. Any guess is as good as the next.

Israeli leaders’ main concern is the Tanzim being coopted to join in a round of violence against Israel. Recent years have seen relative peace and quiet in the West Bank (with the exception of the individual terror wave that erupted in September 2015). This quiet is attributed to the work of the Palestinian security apparatuses and the Tanzim being removed from the equation. One order from the leadership in Ramallah, however, could rouse it. This is the most disturbing scenario and cause for concern for Israel in the coming period. The higher-ups in military intelligence and in the Palestinian General Security Services admit that this is not a “reasonable” scenario, but one that is called in Israel an “extreme” scenario. “Extreme” scenarios in the Middle East, however, have a propensity to materialize at the worst possible time.

To all this, one must add the fact that members of President Donald Trump’s peace team continue to drag their feet in the region and are not supplying the goods that the Palestinians expected to receive. Despite renewed promises by Trump that he is determined to present a program in the near future, it seems that no one in Ramallah is convinced of this. After a short period of euphoria, the Ramallah leadership now understands that Trump will not offer them what former Presidents Barack Obama, George W. Bush and Bill Clinton were also unable to provide.

Meanwhile, Israel faces a dilemma. On the one hand, Prime Minister Benjamin Netanyahu is not really interested in a renewal of the peace process or any other presidential peace initiative. On the other hand, such an initiative could calm the Palestinian street as well as the Palestinian leadership, at least temporarily. Since Netanyahu is the best wizard at playing the “time game,” it could be that, ultimately, an initiative will become his preferred option.