Will Abbas be forced to choose war against Israel?

Palestinian President Mahmoud Abbas is starting to understand that the current situation cannot go on for much longer and soon he will have to choose between peace and war. 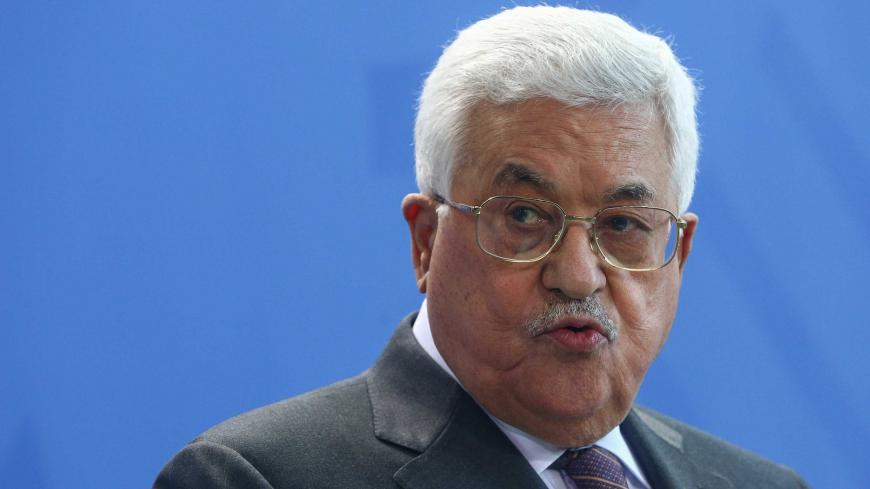 Palestinian President Mahmoud Abbas reacts while speaking to the media with German Chancellor Angela Merkel (unseen) ahead of a meeting at the Chancellery in Berlin, Germany, March 24, 2017. - Christian Marquardt/Getty Images

Israel’s founding father David Ben-Gurion once told Shimon Peres that when it comes to war and peace, a leader has to decide either to make peace and pay the price or make war and pay its price. The price of peace is lower. In the long run, there is no middle ground. Gradually, this is the conclusion that the Palestinian leadership is coming to today.

A senior PLO security official close to Palestinian President Mahmoud Abbas told Al-Monitor on condition of anonymity that the Palestinian president prefers, for the time being, to hold the middle ground — no peace, no war. But he is beginning to comprehend that sooner rather than later he will have to choose; otherwise, others will decide for him.

The official said that according to his sources in Hamas, several meetings took place in recent weeks between Hamas and Hezbollah. The meetings were designed to plan a vast campaign against Israel, inspired by Iran. The way the PLO official sees it, Iran aspires to stir turmoil in the region as a response to what it perceives as US provocation against the nuclear deal, and to the coalition established by President Donald Trump and Saudi King Salman bin Abdul-Aziz Al Saud with Egypt, Jordan and other Arab and Muslim countries.

The PLO official does not rule out a combined attack by Hezbollah against Israel from both Lebanon and Syria, either by the end of 2017 or by the beginning of 2018. Asked what would be the position of the Fatah leadership in this case, he answered categorically, “We are not interested in such a development; Abbas is a man of peace. But under such circumstances and given the total diplomatic stalemate, we would join the battle in a fight for Palestinian independence and East Jerusalem as our capital.” Al-Aqsa and the Israeli occupation would be a joint motto of such a violent deterioration.

Making a point of warning against this, rather than threatening, the PLO official said there was still time to advance on the diplomatic path in a way that could prevent such a cycle of violence. He added that the Palestinian Authority could play a constructive role in attempting to prevent such a deterioration, in cooperation with Egypt, Jordan and Saudi Arabia. Yet according to him, a dramatic breakthrough on the diplomatic front in relation to a two-state solution is essential in order to stop any deterioration.

The Palestinian leadership had asked the Trump administration to declare publicly its support of the two-state solution, to recognize the 2002 Arab Peace Initiative as a basis for peace negotiations with Israel, to call on Israel to freeze any settlement expansion, and to convene a summit that will launch negotiations for a two-state solution. “This should happen before it’s too late,” he argued. The official implied that in the case of a deterioration, Fatah leadership would enter a Palestinian national unity government with Hamas.

A senior US diplomat in Tel Aviv told Al-Monitor that the Trump administration will continue to pursue its efforts to bring about negotiations on the Israeli-Palestinian peace process, but not in relation to any Arab threats or the evolving Iranian situation. Trump will take strong measures in order to deter Iran from realizing its terroristic ambitions and the arming of Hezbollah with sophisticated missiles, he emphasized.

A senior Israeli Ministry of Foreign Affairs official told Al-Monitor that Israel has raised its concerns about Iran and its allies’ ambitions in the region in the strongest possible terms both with the Trump administration and with Russian President Vladimir Putin. Having said that, the Israeli diplomat completely rebutted the Palestinian position that a two-state process would prevent a violent deterioration.

Yet one has to take the warnings of the senior PLO official seriously. In the Middle East, there is rarely a situation of no peace and no war. The vacuum will be filled, and war could, in the not too distant future, again become part of the region’s vocabulary.