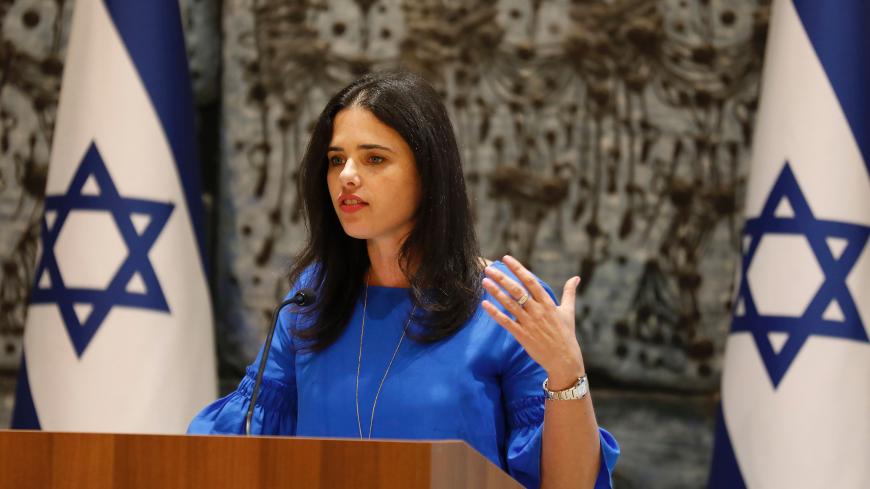 Israeli Justice Minister Ayelet Shaked speaks during the swearing-in ceremony of Israeli Muslim Hana Khatib, the first woman in Israel to be appointed by an Israeli justice committee to become a religious judge, or qadi, in the courts ruling on personal law for Muslims, in Jerusalem, May 15, 2017. - GALI TIBBON/AFP/Getty Images

A portrait of the State of Israel at the end of September 2017, on the eve of the Jewish New Year (5778), would feature three key figures who dominated and shaped the country's political system. It is likely that they will continue to shape Israeli politics in the coming year as well.

The first figure is Prime Minister Benjamin Netanyahu. He has managed to maintain political power despite the criminal investigations that he faces. He sets the agenda and will ultimately determine when the next election will be held.

The second is Avi Gabbay, the chairman of the Labor Party and this year's big surprise in politics. In under a year, he managed to seize control of the party by defeating powerful forces deeply entrenched within Israeli politics. He has also caused the Labor Party to shoot up in the polls, from 12 to 20 seats.

The third is Minister of Justice Ayelet Shaked, the No. 2 figure in the HaBayit HaYehudi coalition and the most powerful and influential woman on the right. Although she is only 40 years old, she has already managed to challenge and transform the Supreme Court, the most powerful institution in Israel.

Until the criminal investigations into Netanyahu were officially made public in January 2017, the political system operated quietly, based on the belief that Netanyahu would remain in power for many years to come. Over time, these investigations began to encompass former senior officials in the Prime Minister's Office. Despite the critical mass, Netanyahu has shown public and personal fortitude. He continues to dominate the public agenda, as if he is not embroiled up to his neck in the investigations, now that his former Chief of Staff Ari Harow has become a state witness against him.

Netanyahu continues to make frequent state visits around the world. He also maintains his tight grip on the Likud through political gatherings and rallies. In other words, he has succeeded in maintaining his position within the Likud and the right as the leading candidate for prime minister. Without any significant diplomatic process, Netanyahu does not face any challenges within his right-wing coalition either. In any other democratic state, a situation such as this would be considered an anomaly. There is no senior figure in the Likud or coalition to challenge Netanyahu, even though he is under several criminal investigations. He is also the person with the best chance of putting together a new government if elections were held today, according to polls.

Netanyahu's coalition is stable, and without an effective opposition he will be the one to decide whether there will be elections next year (or the year after). Like always, his decision will be based on what is immediately expedient to him politically. The more pressure he faces to resign, the more likely his exit from center stage will be the equivalent of a political explosion, ripping up the deck and reformatting the political system. There could also be surprises in a world without Netanyahu, with new stars in the Likud and the right rising to the top of the pack.

The mirror image of the coalition's strength and stability is the weakness of the opposition. Right now, the most interesting player there is Avi Gabbay.

Gabbay is not a member of the Knesset, so he cannot serve as chairman of the opposition. As a result, the outgoing chairman, Isaac Herzog, continues to serve in that capacity. Since his election less than three months ago for party chair in July, Gabbay was quick to introduce a series of successful measures that enabled him to stand out and take action without interference. The question now is what he will do with the power that fell into his hands. Will he be able to leverage that power? First against Yesh Atid Chair Yair Lapid in the fight within the left-wing camp over who their candidate for prime minister will be, and then against Netanyahu or some other Likud candidate, if Netanyahu steps down because of the investigations. So far, Gabbay has reshuffled the deck in the center-left camp and become Lapid's worst nightmare. After all, until July, polls showed Lapid running neck and neck in a race with Netanyahu over the Prime Minister's Office.

Gabbay is a refreshing figure. He is intriguing, too, not least because he was practically unknown until very recently. He is, however, well known in the business world. He ran a huge Israeli telecommunication corporation, Bezeq, and made a sizable personal fortune there, estimated at about 50 million shekels ($14 million). He also served briefly as the Kulanu Party's environmental minister in the current government. Nevertheless, he remained unknown to the general public in each of these positions.

His sudden rise, despite all political and media assessments, is a reflection of the new age in politics — the age of social media, which offers a shortcut to the top. In the old world, his talent wouldn't have mattered. Someone like Gabbay would not have been able to take over the Labor Party without first spending years in its branch offices. In many ways, Gabbay is still an unknown. Next year could be the year he breaks through the barriers and runs against Netanyahu for prime minister. On the other hand, he could also come tumbling down.

Shaked is a lot like Gabbay in that she is also a product of the new politics. Back in 2012, along with her political partner Naftali Bennett, she was part of the takeover of HaBayit HaYehudi, a religious nationalist party on the far right. Although she is a secular woman from Tel Aviv, she has managed to become the most popular woman in HaBayit HaYehudi and the right.

Her appointment as minister of justice revealed her political skills, flair for the media and solid and orderly worldview. She is not afraid to stand up to the Supreme Court, take steps to reduce its authority and change its very makeup while the right cheers her on. In the context of Israeli society, these changes are momentous. She defeated the legal establishment this year by appointing two religious judges to the Supreme Court. She then tried to overthrow the long-established system of seniority. Together with Bennett, she is now advancing a new law that would reduce the court's authority and limit its ability to overturn legislation. Shaked isn't always successful, but her actions alone are changing awareness and helping chip away at the stature of the Supreme Court.

This March, Shaked announced that she sees herself running for prime minister after Bennett. A poll by Walla later named her "the leading female candidate for the position" among the Jewish population. This is an expression of Shaked's popularity among the right, proving that she is made of leadership material. Shaked should emerge as a key political figure in the years to come as well.