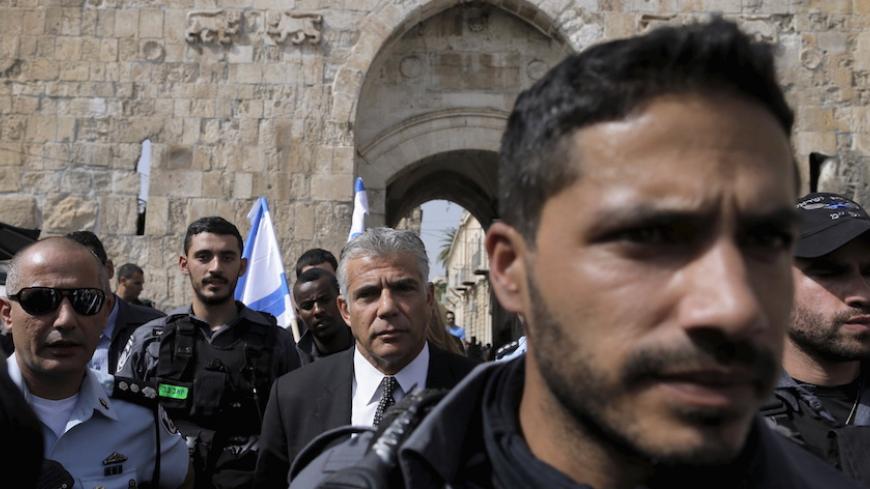 Yair Lapid (C), leader of the centrist Yesh Atid party, is surrounded by police as he visits the scene of what Israeli police said was a stabbing attack outside the Lion's Gate of Jerusalem's Old City, Oct. 12, 2015. - REUTERS/Ammar Awad

Prime Minister Benjamin Netanyahu’s July 23 decision to remove the metal detectors placed at the entrance to the Temple Mount did not manage to completely defuse the crisis in regard to the Palestinians and the Muslim world. Tension still lingered in the air July 31 as the chairman of Yesh Atid, Yair Lapid, and members of his faction toured the high-friction areas surrounding Jerusalem with Border Patrol officers. His Facebook post that day oozed with patriotism and a statesmanly vibe, featuring images of him standing beside Border Patrol members.

Just a day earlier, after convicted Hebron shooter Elor Azaria's appeal was rejected, the Yesh Atid chairman declared his support for the Israel Defense Forces chief of staff, Gadi Eizenkot, and the military court “for standing firm on behalf of the IDF's values.”

Scrolling through Lapid's very active Facebook page reveals that he zealously maintains the same campaign discipline that resulted in some impressive results in polls conducted over the last year and a half. He is patriotic and committed to official values; he is on the warpath against BDS (for boycotting Israel), and he is appealing to the soft right. This all came to an abrupt end about three weeks ago, on July 11, when Avi Gabbay was elected head of the Labor Party. Suddenly, Lapid lost 10 seats in the polls, most of them to Labor. Until then, Lapid had held the title of Netanyahu's main challenger for the role of prime minister. With Gabbay's election, he faced a crisis.

A frantic, nervous interview that Lapid gave to Channel 2 the day after Gabbay's election, and his poor showing in the polls (at least as far as he was concerned), indicated how panicked he was. The deck had been reshuffled, and Lapid was booted out of his near-certain place as the person running head-to-head with Netanyahu for the Prime Minister's Office in the next election. Now he would be forced to contend with a revival from the Labor Party.

The thing is that three weeks in Israeli politics is a very long time. Since then, riots erupted over the Temple Mount after two Israeli police officers were killed July 14, bringing expertise in security affairs to the top of the agenda. Enthusiasm for Gabbay dwindled since he lacked the requisite security experience. At the same time, Lapid enjoyed something of a recovery with a decent show of perseverance.

Just when it looked like Netanyahu could enjoy the infighting in the center-left camp, pitting Lapid against Gabbay for the same pool of votes, last week arrived with new news from all the criminal investigations implicating the prime minister and his innermost circle, past and present. The investigations have struck the Israeli political system like a tsunami.

Despite the Temple Mount tensions and all the investigations into Netanyahu's affairs, he still has the best chances of forming the next government. Nevertheless, the overwhelming feeling in the Likud and the political system in general is that the noose is tightening around the prime minister. This is especially true given reports that his former chief of staff Ari Harow is in the midst of advanced negotiations to become state's witness.

Attorney General Avichai Mandelblit's side has had problems providing a solid basis for the various cases against Netanyahu, especially the one involving alleged graft. A state's witness so close to Netanyahu could change the rules of the game entirely.

In general, the past few days have brought quite a bit of bad news to the Netanyahu family. The prime minister's wife, Sara Netanyahu, was interrogated by the police on Aug. 2 for the fourth time, and it looks like she will be indicted for misuse of state funds and violation of trust pertaining to the prime minister's residences. Meanwhile, Netanyahu's personal attorney (and his cousin) David Shimron returned from overseas and was immediately summoned for additional interrogation about the German submarine affair now that the police have concluded a state's witness agreement with the businessman Miki Ganor.

Once again, the Prime Minister's Office responded by saying that there will be nothing to indict for because there has been nothing illegal. Nevertheless, it is quite clear that Netanyahu is caught up in a maze of investigations and will be for months. Therefore, even if Netanyahu maintains his lead in the polls, the possibility that he might not run in the next election because of the investigations or their findings is becoming conceivable.

In a conversation with Al-Monitor, a senior Likud official said that he believes Netanyahu can drag the investigations out for quite a long time, perhaps even a year. If, however, a decision is ultimately made to indict him, one cannot dismiss the possibility that Netanyahu will not lead the Likud in the next election.

Netanyahu's exit from the game would be a political earthquake of sorts. It would certainly shake up Likud, which is not prepared for the “day after.” Two names are being tossed around as potential heirs to Netanyahu as chairman of the Likud: Transportation Minister Yisrael Katz and former Minister Gideon Sa'ar. Neither of them has the charisma to attract the support of the Israeli public. In fact, Netanyahu's exit from center stage will highlight a drab but extreme Likud leadership.

Given all this, Lapid could again take off. He has been subjected to quite a bit of ridicule for his obsequious appeal to the right and his patriotic messaging, which are part of a carefully constructed strategy based on opinion polls that he commissioned. The surveys indicate that most Israelis are on the right or center-right, so with his poll-based strategy and despite the ridicule, Lapid has managed to distance himself from the image of a left-winger.

Gabbay also wants to net the Likud's soft right, but this is no easy task for the head of a decidedly left-wing party, many of whose Knesset members could easily find a spot in a party like Meretz. Among those voters, Lapid is preferable to Gabbay.

Furthermore, while Gabbay will be forced to devote the next period to building his standing within Labor and contending with the internal squabbling and sparring that is already rearing its head, Lapid stands at the head of a party that he built himself. He is its front man and its sole decider.

So while Gabbay wastes precious time on the internal party affairs, Lapid is already in election mode. He appears in the foreign press, supporting the government and making a point to discuss security matters to prove that he is preferable to a political novice like Gabbay. At the same time, Lapid continues to visit towns considered Likud strongholds, working on the assumption that when Netanyahu is finally forced to resign, he will be there to collect his seats.