Israeli Labor Chairman Avi Gabbay now realizes that his strategy of attracting Likud voters has failed and that his own party is crashing in the polls. 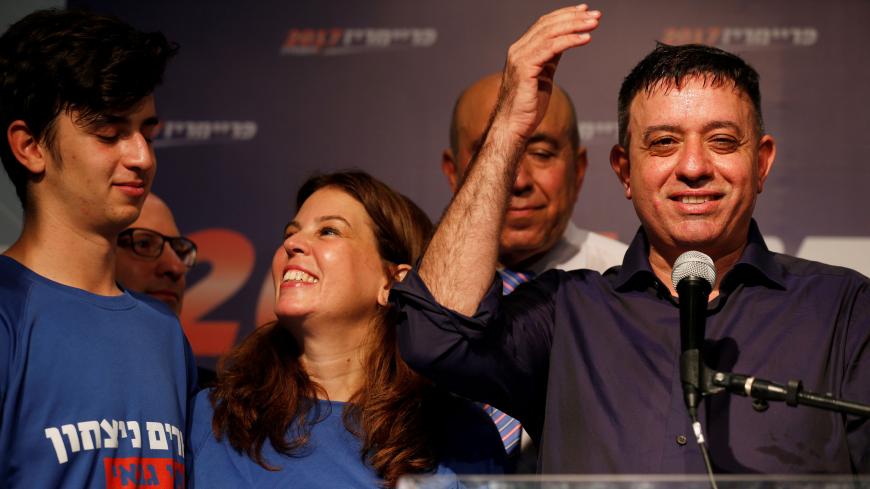 Several Israeli Labor party veterans, including former ministers Ophir Pines and Avraham Shochat, convened March 20 at the party’s Tel Aviv headquarters at the request of party Chairman Avi Gabbay. For the past few weeks, Gabbay has been in a dizzying tailspin, which began with his crash in the polls and continued with a crisis of trust between him and the members of his Knesset faction over the issue of advancing the election. Now he wanted to consult with some of the party’s stalwart former ministers.

None of the attendees blamed Gabbay for the depressing situation. On the contrary, they sympathized with his position and gave him their support. All of these people were experienced enough to realize that when faced with such difficult circumstances and such low morale, there is no reason to continue hurting Gabbay.

Everyone present came away feeling that Gabbay was sincere and that he really wanted to listen. He had finally reached the conclusion that his stunning victory last summer in the party’s primary was not enough to ensure that he could stay on as party leader. Gabbay had shot through the ranks to head the party, when he was not even a member just a year earlier. Overnight, the party soared in the polls, which gave it 22 seats. But the euphoria surrounding his meteoric rise could well have laid the groundwork for all the problems that Labor now faces.

Gabbay did, in fact, try to eliminate all of the party’s wheeling and dealing as soon as he assumed his new position, and he ignored requests by veteran party members to organize gatherings for him. Instead, he said that he wanted to focus on staking out a claim in the hearts of Likud voters and ride their support all the way to the Prime Minister’s Office. Then this strategy collapsed, and voters fled en masse to Yair Lapid’s Yesh Atid party. Soon enough, the polls showed Lapid as Prime Minister Benjamin Netanyahu’s main rival for the post of prime minister, while Gabbay had become the leader of a party in decline.

It is safe to assume that Gabbay would not be wasting his time on veteran party members or attending another party gathering in Likud bastions if he had a strong standing in the polls. Given that he is at such a low point, however, even within his own party, Gabbay needs every hand extended to him and every shoulder he can lean on for support. The meeting at which Gabbay asked for advice from the party’s former leadership seemed to be part of a new strategy to win back voters who had fled the party, or who could yet leave for a reinvigorated Meretz, most likely headed by Tamar Zandberg (to be determined on March 22), or the new party headed by Orly Levy-Abekasis. What this means is that Gabbay will now have to fight on several fronts within his own party and within the center-left camp in general just to win back his relevance as a potential candidate for premiership. Is this even possible? Is his loss of the voters’ trust reversible?

At the March 20 meeting, the former ministers assured Gabbay of their support. They even raised a few ideas on how he could overcome the current situation. Nevertheless, it is clear to all of them that in the end, it is up to Gabbay and Gabbay alone to prove his mettle. Pines suggested, for example, that Gabbay should put together a security team to work beside him. He even suggested a few names, including former generals Amiram Levin and Yom-Tov Samia, as well as Knesset member Omer Bar Lev, a colonel in the reserves and a former commander of the elite Matkal unit. Such a team could make up for Gabbay’s complete lack of experience in this area. “Everything is possible in politics, and everything can be turned upside down. Avi Gabbay has the talent and skills to win back the public’s trust,” Pines told Al-Monitor.

The reasons for Gabbay’s rapid crash have been discussed ad nauseam. They lie in the mistaken belief that many Likud supporters would abandon Netanyahu and move in droves to Gabbay, thinking that he was one of them. After all, he is a Mizrahi Jew, who grew up in a transit camp, but he also had a successful career. Not only did this fail to happen. The current police investigations surrounding Netanyahu have shown that the exact opposite is true. Likud voters are completely loyal to the party and its leader. This left Gabbay without support on both the right and the left.

No less serious is the crisis of trust between Gabbay and many members of his party. Gabbay was in Washington when the saga surrounding the possibility of advancing the election was reaching its climax. When he got back to Israel, he discovered that the party was in such disarray that it lacked a uniform public relations line. The problem is that speaking to the media in multiple voices is the exact opposite of campaign discipline. It is no secret that quite a few Labor Party Knesset members were terrified by the possibility of early elections. Given the party’s standing in the polls, they had come to the conclusion that most of them would not be returning to the Knesset after the next election.

There was a point to Netanyahu’s derisive comments, ridiculing the opposition for having “election phobia.” His remarks certainly made the opposition look ridiculous. The main article in Haaretz on March 15 that Labor Knesset members teamed up against Gabbay and blocked attempts to advance the election did not help him at all. It simply sparked more party infighting in a kind of “war of versions” over what actually happened. It also intensified Gabbay’s sense of isolation and his suspicions toward everyone around him. This got even worse once people started talking about replacing him.

It is quite possible that Gabbay’s version of events was correct. Maybe he really did support moving the election up to June, as an opposition party leader should do, even if it also served Netanyahu’s interests. The bottom line, however, is that it makes no difference. Israelis already believed that Labor was running for its life to avoid an early election. The party is navigating stormy waters. It is a critical test period for Gabbay.

On the one hand, he knows that the members of his party will not really try to unseat him. No one wants to be seen as a subversive wheeler-dealer. Nor is it easy to conduct a procedural putsch. On the other hand, Gabbay’s grace period is over. Knesset members such as Eitan Cabel have already been quoted as saying that they are extremely worried about whether the party could continue to exist under his leadership. Facing these charges, Gabbay fought back, telling “Meet the Press” that anyone who does not fall into line will find himself out of the next Knesset.

Gabbay believes that he draws his strength from the Labor Party’s membership and not from its Knesset members. While this is undoubtedly true, if he is to continue as party chair, he will first have to repair his relationship with the party’s senior leadership. If he fails to do that, he could find himself without a party.

Meanwhile, Gabbay has shown tenacity despite the crisis within his party. This is vital for a politician in his position. Talking to Al-Monitor this week, he sounded confident in his ability to turn everything around. “I receive positive sentimental feedback from the public, and it’s getting stronger,” he said. “I failed to appreciate the importance of meeting with long-standing party activists, because I was busy bringing in new voter bases. I am fixing that. Right now, I am sowing the seeds. In the end, I will harvest the fruit.”