Until last year, Iran's natural gas production was almost entirely consumed domestically. Now it is set to exponentially increase natural gas exports in coming years, but not without challenges. 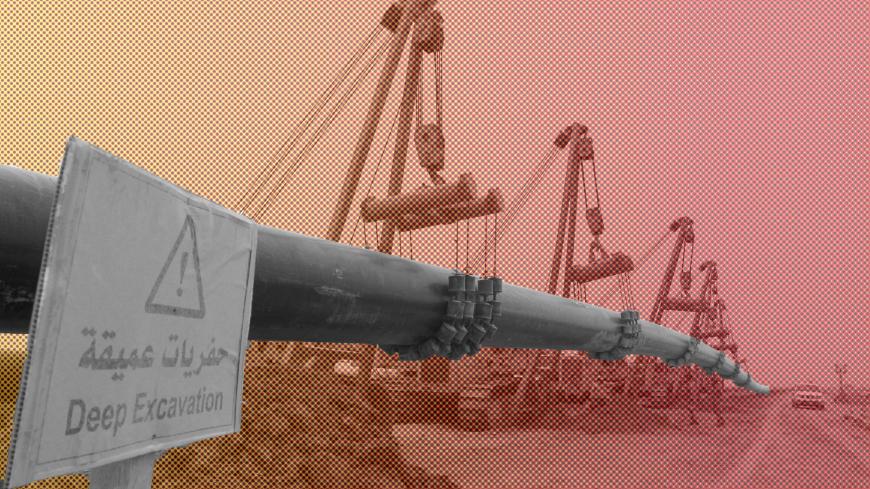 Workers set up a natural gas pipeline on the border between Iran and Iraq, April 12, 2016. - REUTERS/Essam Al-Sudani

With 33.5 trillion cubic meters of natural gas, Iran has the largest conventional gas reserves in the world. Along with its vast oil reserves, it also has sizable, non-associated conventional gas resources that are being developed aggressively. With regard to exports, however, natural gas has never matched the significance of oil in Iran. Nonetheless, Tehran has boosted gas production tremendously in the past few years, despite sanctions and other challenges. Up until 2016, almost all of Iran's gas production was used for domestic consumption, freeing up more oil for export. In the meantime, a saturation of domestic utilization has allowed Iran to boost its exports, which are still negligible compared to the resource potential. Officials recently said that gas exports grew by 64% during the period of March 21 to Aug. 22, 2017, compared to the same period in 2016.

According to the “BP Statistical Review of World Energy,” Iran produced 202 billion cubic meters (bcm) of gas in 2016. The country’s Ministry of Petroleum envisions annual gas production of 300 bcm by 2020, which is a reflection of its enormous resource base. Other objectives and priorities are as follows:

Experts note one omission — a strategy to produce liquefied natural gas (LNG), which is easier to transport to distant markets, including Europe. Though Tehran has one significant project in this sector, Iran LNG, the development of this technologically more complex branch of the gas sector is not a priority for Iran in the medium term.

Iran's vision for gas ties in well with the “Document on Resistance Economy,” which emphasizes value-added activities and increases in gas and electricity exports as well as the export of petrochemicals and petroleum products. Each of the above steps makes sense as components of a strategy driven by domestic value generation. Yet each step presents Iran with challenges that need to be overcome.

First and foremost, increasing production from 202 bcm to 360 bcm by 2025 will require an investment of more than $50 billion in upstream projects in addition to which further capacities will be needed mid-stream (such as pipelines) and downstream. The issue in achieving the above goal is not the availability of projects, but the investment flows and Iran's ability to absorb this level of investment considering the restrictions of its contractual framework, especially concerning local content. As such, the pace of the production increase may be slower than officials hope.

Notwithstanding, there will be considerable growth in production capacity, and the surplus gas will need to be allocated to various sectors. As the above vision indicates, injecting gas into oil fields has been a priority, and this goal seems to be sufficiently addressed. When it comes to distributing gas to other sectors — such as electricity generation, petrochemicals, industries, etc. — the Ministry of Petroleum faces multiple challenges. On the one side, there is sectoral competition, as gas can help each of these sectors to flourish. On the other side, regional competitions undermine national planning by the relevant companies. Furthermore, the distribution of gas across Iran’s vast geography faces operational and practical bottlenecks such as land ownership, environmental issues and so on.

At the same time, attracting investment and technology into gas-based industries will require a comprehensive strategy for contractual frameworks, including gas pricing, an issue that has not been resolved due to disagreements among political stakeholders.

As for increasing the share of natural gas to about 70% of the domestic energy basket, according to the deputy minister in charge of gas, Hamid Reza Araghi, gas is already 72% of the country’s energy basket, though according to the BP review, the gas share was less than 65% in 2015. Whatever the actual figure, reaching a 70% share by 2025 is feasible, if the needed investments materialize.

Finally, the goal of exporting gas to neighboring countries is already in place, with Iran exporting gas to Turkey and Iraq, preparing to export to Oman and negotiating to export to Pakistan. The plan is to export to as many neighbors as possible and to also look for potential in other regions, including Europe. The challenge of exporting gas is, however, seen in the relationship between Turkey and Iran. Their so-called take or pay contract has been subject to a number of disputes, including the most recent arbitration that forced Iran to export gas free of charge to Turkey, a source of political controversy in Tehran. The fact is, cross-border links are challenging in politically unstable West Asia. At the same time, some stakeholders in Tehran are arguing that Iran should export energy in the form of electricity, which is more feasible to energy interconnectivity.

Natural gas also plays a role in the relationship between Iran and Qatar, the two nations that share the largest gas basin in the world, known as South Pars in Iran and North Dome in Qatar. The shared interest in sustaining and increasing the wealth potential of this reserve has helped the two sides develop a pragmatic relationship that stands to benefit both sides, especially considering the current anti-Qatar sentiment in the Gulf Cooperation Council. Even though there is always potential for tensions in operating shared fields, Tehran will not interfere with Qatar’s operations. Iranian Petroleum Minister Bijan Zanganeh recently stated, “They can carry out their development projects as we do ours.”

Gas flaring represents another operational challenge that will gain in significance in line with the Paris Climate Agreement. Incidentally, Tehran is making an effort and accordingly seeks to extinguish associated gas flares at South Pars fields by March 2020.

There is no doubt that Iran has a huge potential in the gas sector. As outlined by Al-Monitor more than three years ago, Tehran needs to reform its gas sector by introducing an appropriate gas-pricing strategy as well as legal, operational and political frameworks that will attract the latest technologies to all subsectors of the gas value chain and promote gas-based industries as well as energy efficiency. Despite existing challenges, the technocratic team around Zanganeh is experienced enough to introduce the needed policies, but the complexities in the political structure as well as regional uncertainties will continue to delay the realization of the country’s full gas potential.