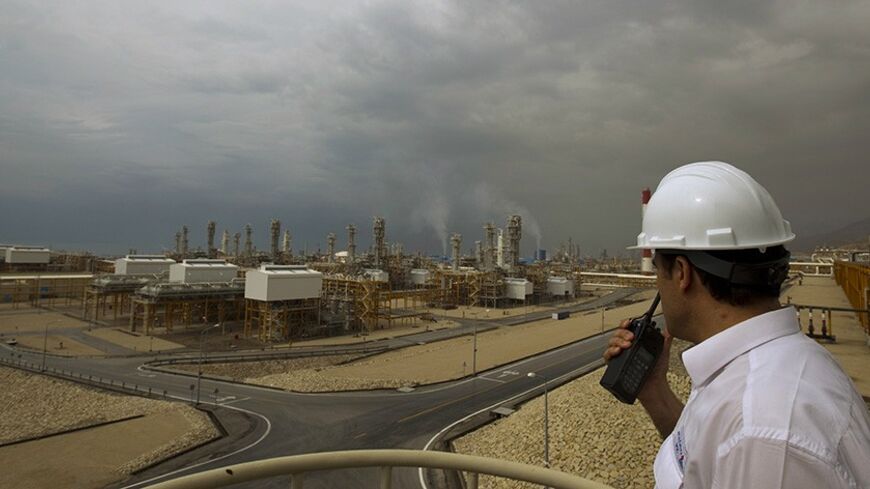 An engineer speaks on his radio at the Phase 4 and Phase 5 gas refineries, Assalouyeh, Jan. 27, 2011. - REUTERS/Caren Firouz

As international companies are awaiting the practical consequences of the implementation of the interim nuclear deal between Iran and world powers, one issue is certain: Gas will be at the core of Iranian developments over the next decade.

With 33.6 trillion cubic meters (about 18% of global reserves) of proven gas, Iran is, next to Russia, one of the top two countries with regard to conventional gas reserves. In terms of natural gas production, the country ranks first in the Middle East, and third in the world after the United States and Russia. Nonetheless, sanctions, mismanagement and wasteful domestic energy consumption have all suppressed the potential of Iran's gas sector.

Iran’s limited gas exports are not the problem. In fact, from a macroeconomic point of view, it may be more valuable for Iran to export gas and energy in other forms, such as electricity or products of so-called gas-based industries (petrochemicals, steel, cement and aluminum). One can argue that, currently, a segment of Iran’s gas export potential is being realized in the form of such products, especially petrochemicals and cement. However, the core problem is the enormously high residential and commercial energy consumption.

Unusually cold winters tip the balance, as they have done this year. On Dec. 30, 2013, the National Iranian Gas Company (NIGC) measured a record consumption of 482 million cubic meters per day. When residential and commercial consumption peaks, Iranian authorities restrict gas supplies to power plants and other industries, some of which are forced to use liquid fuels with lower efficiency and a higher pollution footprint. Furthermore, in critical phases (such as early January 2014) gas supply to some compressed natural gas (CNG) stations are also suspended, which in turn increases gasoline consumption.

Experts agree that the most effective method to contain energy consumption is through pricing. Iran has corrected prices to some extent through subsidy reforms, and this process will continue in two more phases until 2015. While price corrections have had some effect, residential and also industrial consumption remain high. Per capita energy consumption in Iran in kilograms of oil equivalent stood at 2,831 in 2011. By comparison, the same indicator stood at 1,539 in Turkey.

This fact points to the key problem of low energy efficiency. The country desperately needs to improve its energy efficiency in all fields, ranging from transportation, construction, facilities management and industrial activity. This urgent need connects directly to available Western technologies, which could be accessed if more sanctions are lifted.

Interestingly, officials from the Organization for the Optimization of Energy Consumption — a governmental entity tasked with promoting energy efficiency — stated that the cost of saving the equivalent of one barrel of oil in energy consumption is only one-third of the cost of adding one barrel of oil equivalent to the country’s production. Therefore, increasing energy efficiency is not only environmentally more responsible but also economical.

As far as increasing production is concerned, the Ministry of Petroleum has made production in the country’s largest gas field — the South Pars in the Persian Gulf — a priority. The development of South Pars is considered a priority because it is shared with Qatar (South Pars connects to Qatar’s North Dome, and the combined reserve is the world’s largest gas field). Iranian officials believe that Iran needs to catch up with Qatar in terms of utilizing this vast reserve.

Interestingly, Doha has offered Tehran its support in the development of South Pars to secure a long-term, sustainable production in the field for both parties. According to industry experts, exploration activity on both sides has caused lower pressure in adjacent fields, reducing flows to the surface. Cooperation between Iran and Qatar will certainly maximize the production potential and also improve economic and political ties between the two countries.

According to industry insiders, Iran’s gas production has the potential to increase to 250 billion cubic meters by 2016, once the South Pars and other projects come on stream. Clearly, the expected lifting of sanctions could facilitate the process. The anticipated volume will undoubtedly explode the country’s potential for gas and related exports. Based on the current strategy, Iran will mainly focus on expanding its electricity production and exports, as well as its gas-based industries. Pipeline gas exports to Iraq, Pakistan and other neighbors — as well as increased gas exports to Turkey — are also on the agenda. Some of the excess gas potential will also be used for gas injection into oil fields to increase oil production from older fields.

Realizing the enormous future potential of gas, the Iranian government has decided to remove NIGC and its subsidiaries from the list of companies that should be privatized. Nasser Abgoun, a director of NIGC, said that Petroleum Minister Bijan Namdar Zanganeh expressed his opposition to transferring gas-processing plants to the private sector due to the sensitive and important role they play in the production, export and supply of gas.

It is clear that natural gas will play a critical role on many levels in Iran. Natural gas is the country’s most valuable resource and can attract foreign investment and technology in diverse sectors. The key industries will be gas-based to optimize the economic benefits of this natural resource. Furthermore, gas and electricity exports will be the backbone of Iran’s interactions with its immediate neighbors, which are mostly in need of gas or electricity imports. (Even oil-rich Saudi Arabia and Iraq will need gas and electricity imports to meet their growing domestic energy needs.) As such, Iran’s gas potential will not only facilitate economic growth, but it can also help reduce tensions with Pakistan and Saudi Arabia.

To achieve that potential, the government will have to draft a comprehensive strategy for the gas sector and its related industries. An appropriate gas pricing strategy will be one of the success factors. Furthermore, Tehran has to attract the latest technologies to all subsectors of the gas value chain (from upstream to midstream and downstream), gas-based industries and, most importantly, energy efficiency.

If all of the above happens, Iran will be on its way to becoming a significant hub for energy production and energy-related exports on an international scale.