While there are important obstacles in the way of the realization of the Iran-Pakistan pipeline, the Trump administration’s policies amid the rise of Imran Khan could tip the scales in the project's favor. 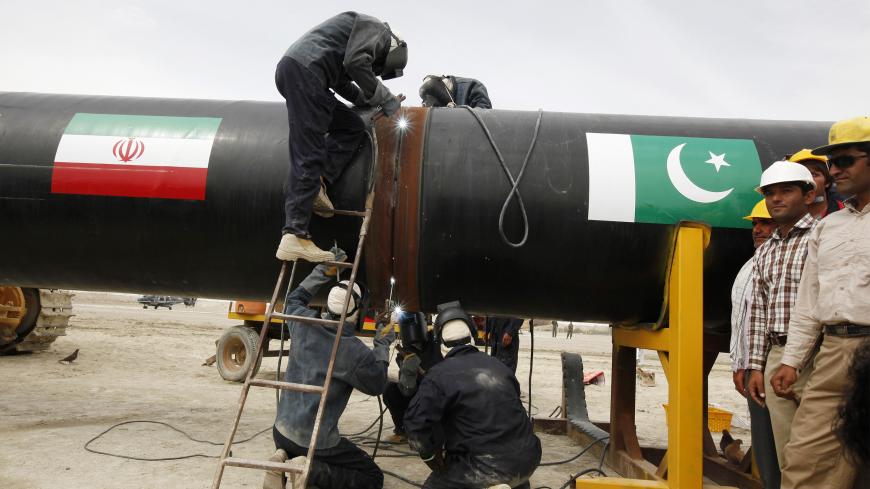 Iranian workers work on a pipeline to transfer natural gas from Iran to Pakistan, in the city of Chahbahar in southeastern Iran, March 11, 2013. - REUTERS/Mian Khursheed

Iran is cheerful with Imran Khan in office next door. Even before his inauguration as Pakistan’s new prime minister, President Hassan Rouhani picked up the phone to congratulate Khan and invite him to Tehran. There are two main reasons, among others, for Iran’s cheerfulness. As discussed in an Aug. 4 conversation between Iran’s ambassador to Pakistan, Mehdi Honardoost, and the Pakistani prime minister, there is the prospect of Islamabad playing a role in helping to improve relations between Tehran and Riyadh. There is also the matter of the future of the long-stalled Iran-Pakistan (IP) natural gas pipeline. Honardoust asserted the Islamic Republic’s desire to see this project, which could “change the future of Pakistan,” finally come to fruition. But does Iran have the capacity to operationalize the project, and does it really hold the potential to change the future of Pakistan?

One key issue is the matter of Iran’s natural gas reserves and its ability to extract it. According to British Petroleum’s 2017 report, Iran has the largest proven natural gas reserves in the world at 1,183 trillion cubic feet (tcf), ahead of Russia’s 1,139 tcf. With this vast resource in hand, Iran in 2016 produced 202.4 billion cubic meters (bcm) of natural gas — the third highest in the world, accounting for 5.7% of global output. Even though consumption stood at 200.8 bcm in the same year, the 1.6% difference between the growth rate of consumption and production in 2016 implies that Iran already has surplus production capacity, which is projected to increase.

Pakistan — and also India, the once-envisioned terminus of the pipeline — has experienced a very low rate of growth in consumption, annually standing at 2.5% and 2.1% respectively during 2005-2015. Over the same period, the average annual growth rate of production and consumption in Iran both stood at 6.4%. In other words, even at a time of severe international sanctions during which foreign investment in Iran’s energy industry decreased dramatically, high growth in consumption was satisfied by equally high growth in production. In this vein, it is predicted that even if production does not rise as planned — as a result of renewed US sanctions or any other circumstance under which investment in the gas industry may decrease — Iran’s ability to produce surplus natural gas will increase.

Output is a direct function of investment — especially foreign investment. Aside from 2005 and 2006, the annual amount of foreign direct investment (FDI) in Iran during 2005-15 remained below $800 million. When FDI increased to $805 million in 2016, the production of natural gas at South Pars, the largest natural gas field in the world, increased two-fold in the subsequent year. Some observers have pointed out that this success could now be at stake due to the unilateral sanctions reimposed by the United States in the aftermath of its withdrawal from the nuclear deal. For instance, French energy giant Total has decided to leave its lucrative operations at South Pars due to the sanctions, in a stark reminder of the circumstances that convinced India to pull out of the initial plans for the Iran-Pakistan pipeline to extend to India.

But there are important factors that will likely work in favor of Iran this time around. Even though US sanctions target Iran’s energy sector and exports, their unilateral nature is likely to weaken implementation compared to the broad international buy-in of the sanctions imposed by the Obama administration. Indeed, given Donald Trump’s "America First" policy, countries like China and India have political and economic incentives to react differently to the current round of US sanctions. Under Prime Minister Khan, Islamabad could follow suit, particularly mindful of Trump’s decision to cut financial aid to Pakistan.

Signs of these new dynamics can already be seen. By transferring Total’s 50.1% stake in the Phase 11 project to China National Petroleum Corporation (CNPC), signing a recent contract with Russia’s Gazprom to invest in the Farzad B gas field, and by reportedly attaining a $50 billion investment promise from Russian President Vladimir Putin to replace European investors who may leave Iran due to sanctions, it seems that Tehran will be able to control the consequences of external restrictions on its gas production capacity. In sum, Iran has sufficient, proven natural gas reserves, congruency between production and consumption growth, as well as necessary foreign investment and technology to produce enough gas for the IP pipeline project.

Yet there are important questions about whether Islamabad has sufficient incentives to recommence the stalled project. As noted above, at its inception, the pipeline was first and foremost lucrative given the participation of India. Indeed, the original plan for an Iran-Pakistan-India (IPI) pipeline was supposed to transfer 60 million standard cubic meters per day (mscm), but after India pulled out, this amount decreased by half. In comparison, the Turkmenistan-Afghanistan-Pakistan-India pipeline, a rival endeavor promoted by the United States, is projected to transfer 90 mscm per day.

Another concern is the usage of the natural gas that the IP pipeline project is supposed to transfer. Pakistan initially wanted to use the gas to produce electricity, as there is presently a gap of 4,000 to 7,000 megawatts between supply and demand for electricity in the country. But Iranian natural gas has turned out to be too expensive for Pakistani power plants. Producing electricity with locally exploited gas — mostly from its Baluchistan province — would cost Pakistan $3.5 per million British thermal units (Btu). The cost when using Iranian gas is $12 per million Btu, which is seemingly unaffordable for local customers. Moreover, with the multi-billion-dollar China-Pakistan Economic Corridor (CPEC) in progress, Pakistan will soon be able to produce electricity with coke/coal power plants. Islamabad has also been trying to make up for part of its electricity shortage via other endeavors such as the CASA-1000 project. Altogether, these measures will reduce Pakistan’s need for the IP pipeline — at least when it comes to producing electricity.

However, this does not mean that the IP pipeline is no longer feasible. While the coal-based power plants of the CPEC may reduce the importance of the IP pipeline, the CPEC could in fact aid the project’s revival in other ways. With Gwadar at its heart, CPEC is aiming to turn the port into the energy hub of the region. Since liquefied natural gas (LNG) terminals are an important part of the future of Gwadar — and since Iran’s attempts to develop such a capacity have repeatedly failed — Pakistan could soon be presented with the option to re-export imported Iranian gas as LNG. This could further motivate Khan’s government to operationalize the pipeline project. For Iran, this scenario would boost its energy export plans, which greatly focus on diversification. It should additionally be borne in mind that there are plans for refineries to be built at Gwadar, which could provide another important outlet for imported Iranian gas.

As such, if realized, it appears that imports of Iranian natural gas via the IP pipeline do hold the potential to help transform the future of Pakistan while providing Iran with an important new energy customer and partner.