Iran and Pakistan both have political and economic interests in seeing a long-delayed gas pipeline come to fruition. 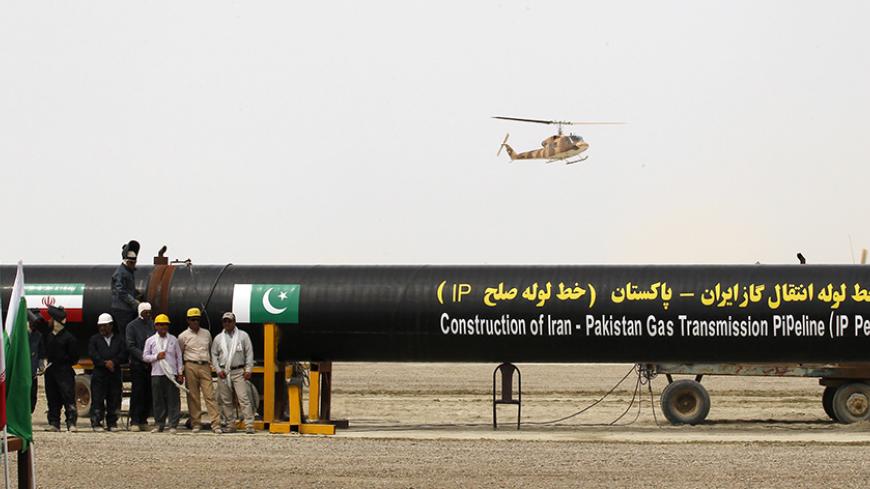 Iranian workers stand by as a security helicopter lands near the pipeline during a groundbreaking ceremony to mark the inauguration of the Iran-Pakistan gas pipeline, in the city of Chahbahar in southeastern Iran, March 11, 2013. - REUTERS/Mian Khursheed

The Iran-Pakistan (IP) pipeline can be characterized as a second “Bushehr” for the Islamic Republic: costly, high-profile, repeatedly delayed and greatly exposed to political pressure. However, 20 years after Iran and Pakistan first signed an agreement to construct a natural gas pipeline, the project finally seems en route to fruition.

Of the numerous obstacles to the project’s finalization, US opposition in particular has weighed heavily.

Washington has long lobbied for the Turkmenistan-Afghanistan-Pakistan-India pipeline while discouraging the IP pipeline, promoting Turkmen over Iranian natural gas. In recent years, toughened Western sanctions on Iran have made the project even more cumbersome.

Punitive measures targeting involvement in Iran’s energy industry, along with financial and banking restrictions, have hit funding for Pakistan’s section of the pipeline, and complicated discussions on payment mechanisms. Compounded by Islamabad’s dire economic condition, Iran has ended up building its section from its southern city of Asalouyeh to its border with Pakistan. Islamabad is contractually obliged to pay steep fines, beginning in the winter of 2014, when gas deliveries were supposed to commence. However, payment of these fines, triggered by Pakistan’s failure to build and operate its section of the IP pipeline, has not materialized — with Iranian consent.

Apart from targeting the IP pipeline, Western sanctions have also cut the liquefied natural gas (LNG) route for Iranian exports. Since Western firms hold a monopoly on the technology needed for crucial aspects of LNG infrastructure, sanctions have halted Iran’s ambitious LNG projects. Meanwhile, energy-starved Pakistan earlier this spring bought its first-ever LNG shipment — from Qatar. Ironically, this Qatari natural gas originates from the vast North Dome field, which is shared with Iran, where it’s called South Pars, and from which the IP pipeline is slated to be fed.

US pressure has also played a role in thwarting the pipeline’s envisaged extension to India. Pricing, security concerns and troublesome Indian-Pakistani dynamics were important factors in preventing New Delhi’s participation. However, US pressure on India to abstain should not be underestimated. While largely driven by separate dynamics, it is of note that the 2008 US-India Civil Nuclear Agreement preceded India’s subsequent decision to pull out of the pipeline’s extension.

The heightened prospect of the project’s near-term finalization springs from two recent developments: the breakthrough in the nuclear negotiations between Iran and the world powers, and China’s move to provide a massive $46 billion investment package to Pakistan.

The US State Department’s Special Envoy for Energy Amos Hochstein stated April 29 that “as long as the [nuclear] agreement [with Iran] is not reached, sanctions are in place and therefore, Pakistan should hold off undertaking any project such as the IP pipeline until the removal of sanctions.” However, considering the likelihood of a final nuclear deal come June 30 — and a likely front-loaded deal at that — Tehran and Islamabad have reason to be upbeat. Moreover, as part of the Chinese investment package, up to $2 billion has been earmarked for a pipeline running from Pakistan’s southern port of Gwadar to Nawab Shah district. Mindful of the planned LNG terminal in Gwadar, which would allow such imports from countries such as Qatar, this arrangement steers China and Pakistan clear of US objections while putting Islamabad in a position to get the IP pipeline started by building a short stretch of pipeline from Gwadar to the nearby Iranian border.

The greater economic and political repercussions of the IP pipeline are clear and widely debated. For Pakistan, the IP pipeline is projected to have the capacity to entirely cover the current shortfall of 4,500 megawatts of electricity generation. For Iran, new markets to the east will be opened, not only expanding but also diversifying energy export revenues. Iranian Oil Minister Bijan Namdar Zangeneh last week emphasized that Iran’s main focus for gas exports is Asia rather than Europe. Moreover, both China and Iran have stated an interest in extending the pipeline to Chinese territory.

However, perhaps overlooked is the impact that boosted Iranian-Chinese trade and interaction with Pakistan will have on power politics in the Middle East.

If Iran maneuvers correctly, the IP pipeline has the capacity to bring it both petrodollars and eastward political clout. For Pakistan, the pipeline — amid the backdrop of the increasing weight of its long-standing strategic cooperation with China — will not only diversify energy sources, but provide previously unthinkable political options. The latter is already happening. The combined outcome of the recent visit of a senior Iranian delegation to Pakistan and China’s subsequent unveiling of its massive investment package is a case in point: Islamabad dared to refuse Saudi Arabia’s request for ground troops and other military involvement in Yemen.

While the Chinese visit had been planned long beforehand, reports say “the Pakistani interlocutors also raised with the Chinese president the possible fallout of ‘defying’ the Saudi demand,” and that “President Xi assured Pakistan that his country would stand behind Islamabad in the event of unraveling of its ties with the Arab world.” Saudi Arabia and other members of the Gulf Cooperation Council lashed out at Pakistan over its refusal to join their Yemen offensive.

Long portrayed as Riyadh’s “Plan B” in case of an Iranian nuclear bomb, Pakistan’s defiance on Yemen serves to further question Saudi Arabia’s standing in the region. Recently, senior Saudi officials have asserted that they will seek whatever nuclear capabilities Iran will maintain under a nuclear deal. However, since Saudi Arabia has no domestic nuclear industry, and the Nuclear Suppliers Group has banned the export of many necessary components to the region, only countries such as Pakistan and North Korea are potential enablers of stated Saudi nuclear ambitions. Apart from the grander, more obvious impediments to questionable Saudi-Pakistani nuclear dealings, the dynamics witnessed in relation to the Yemen debacle makes the latter scenario ever more unlikely.

Rather than being anxious about merely the nuclear deal with Iran, Saudi Arabia certainly has reasons to worry about the repercussions of an end to Western efforts to isolate Iran.