Ghada Wali, listed as one of the top game-changers under 30 by Forbes, is determined to make Arabic one of the common global languages. 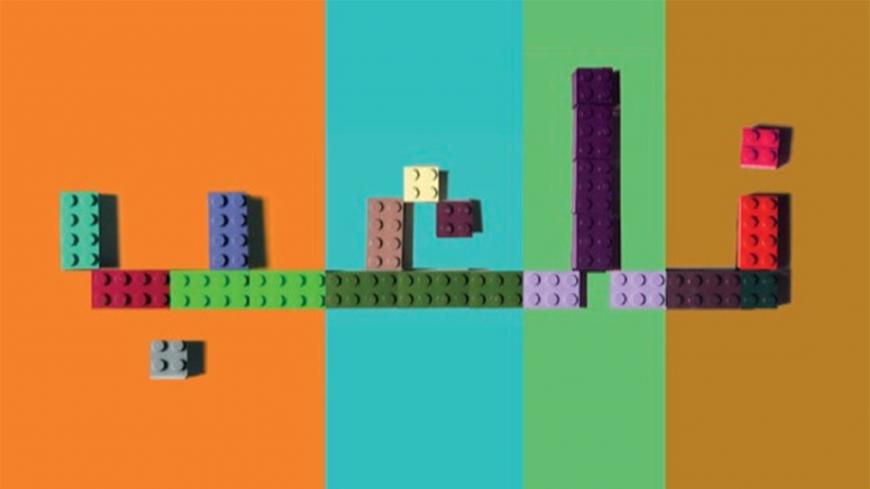 Egyptian graphic designer Ghada Wali has created the “Let’s Play” project that is designed to help early learners and foreign speakers learn the Arabic language. The book Wali has designed uses colorful Lego bricks to create Arabic letters, with the Latin equivalent for each letter and its phonetic pronunciation listed. A 400-word dictionary is also included in the book.

The book also aims to help the user understand the challenges of the Arabic language, such as isolated, initial, medial and final forms of each letter by using Legos to show how each letter changes depending on where it appears in a word.

“We need innovative ways of Arabic-language education,” Wali, 27, told Al-Monitor, underlining that she hopes teaching Arabic would form a bridge between Arabs and non-Arabs. “I thought about how I could make the world stop seeing us [Arabs] as evil, as terrorists, and start perceiving us as equals, as fellow humans.”

It was this desire that led her to use Lego bricks, which she describes as “a symbol of innocence” and “the language of a child’s play,” to teach Arabic.

Wali said that the Lego bricks were “just a metaphor” for communications without borders. “That's because we are all made of the same unit,” she said, adding that she wants to see a future where the barriers between people — whether linguistic, cultural or political — come tumbling down.

Wali’s academic background focuses on experimental typography. She obtained a master’s degree in graphic design from the Istituto Europeo di Design in Florence, Italy, in December 2016, and she graduated from the faculty of applied sciences and arts at the German University in Cairo in 2011. She worked as a senior art director at the advertising agency MI7 Cairo, as a graphic design tutor at the American and German universities in Cairo, and for multinational advertising and marketing companies such as J. Walter Thompson and Fortune Promoseven.

While Wali was studying for her master’s degree in Italy, she missed her language. “I missed looking at its beautiful letters and exploring their meaning. So, one day, I walked into one of the biggest libraries in Italy in search of an Arabic book," she said.

When she could not find Arabic poetry or fiction books, she decided to do something to show the richness of Arabic literature and language.

Wali has set up similar projects in the past, such as creating a typeface that translates Latin letters and words into hieroglyphics and vice versa.

In 2016, Wali’s work won the Granshan competition in Munich, two Adobe Design Achievement awards in San Diego and she was voted among the best 100 graphic designers in the world by the Society of Typographic Arts Chicago.

Wali also made it onto the 2017 Forbes 30 under 30 list for her graphic design achievements, which she said is “an honor and encouragement to push harder."

“It takes a very long time, years of hard work and tons of challenges before an Arab woman can have a stab at a fair chance of global recognition in a world that is dominated by males and by the West,” Wali noted.

Arabic is the official language of 22 countries with more than 300 million speakers, primarily in North Africa and the Middle East. The language spread with the rise of Islam in the 7th century. The Quran is written in classical Arabic, which is the common language of literature and media throughout the Arab world. Arabic speakers, however, do not communicate in classical Arabic, but use modern standard Arabic, or local dialects, instead.

“My aim is to break the fear of language and to transform the educational experience,” Wali said, expressing hope that her colorful learning tool one day becomes an application and a board game and is used in schools to facilitate Arabic learning.

She added that she wants to make Arabic letters more accessible to a larger audience and facilitate the Arabic language to become a common language in the world.