A Russian artist revealed his paintings have been displayed in the national metro project in Egypt without his consent and without mentioning his name, threatening to take legal action. 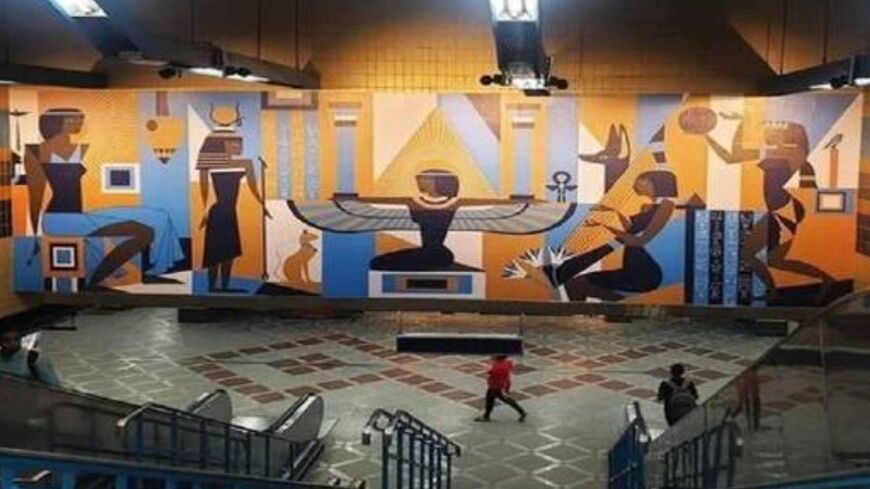 A view of the mural before it was removed. - Twitter/Newswire24

CAIRO — A design company contracting with the Egyptian government to draw murals for metro stations in Egypt has caused a major scandal recently, after a Russian artist claimed that one of his paintings was used at a Cairo station without his consent.

Russian artist Georgy Kurasov made plagiarism charges claiming the mural, adorning the walls of the Koleyet El Banat station on the Cairo metro’s line 3, was his own, and was used without his consent.

On July 2, Kurasov took to Facebook, saying, “My paintings were used in Cairo subway without my permission and even mentioning my name! Really after my conversation with Egyptian journalist Amany Ibrahim, I am waiting for an official response about the theft of my paintings in a metro station. El Attar Law Firm currently officially represents my interests in Egypt.”

The Egyptian National Authority for Tunnels denied its liability over the plagiarism charges, stating that it had concluded an advertising contract with Wali's Studio, founded and owned by Egyptian artist Ghada Wali, under which the company would be solely responsible for providing original artistic designs.

In a July 5 press statement, the authority said that the contract specified that in case of quoting or copying, the advertising company must obtain official legal approval from the artists who own those works authorizing their use, according to the relevant recognized practice and customs.

The statement noted that in March, the contract with Wali's Studio was terminated due to other reasons related to a breach of some of its terms.

The authority also stressed that it was not aware that these designs were illegally inspired by the paintings of a Russian artist, adding that it is against any infringement of intellectual property rights in any form.

The authority assured appropriate legal procedures are being considered against the advertising company to preserve all their rights if the allegations are proven, and accordingly, the illegally reproduced designs will be changed.

Al-Monitor tried to contact Wali's Studio, but the company's public relations department refused to give any media statement, saying only, “A response will be given in due course, according to the company's decision on the procedures.”

On July 7, workers affiliated with RATP Dev, a French company that operates and maintains line 3 in Cairo, removed the mural that has caused controversy.

Wali, a graphic designer, was picked in 2017 to be the Egyptian female representative at the World Youth Forum in Sharm el-Sheikh, under the patronage and presence of President Abdel Fattah al-Sisi.

She was honored by Sisi who greenlighted her visual identity project to be implemented in Luxor under her and her sister Yasmin’s direction.

Speaking to Al-Monitor, Qabbani denounced assigning the task of adorning the murals of the metro stations to Wali, affirming it should have been instead assigned to the syndicate. “I was surprised that a great national project such as this one would be assigned to her [Wali] without referring to the syndicate, which includes senior artists, professors and people with a long history in arts and painting. Our members have participated in drawing the murals of the metro stations previously, and they were a success,” she noted.

Ahmed Hassan el-Attar, lawyer and director of El Attar Law Firm representing Kurasov, told Al-Monitor, “Removing the designs from the metro station is not enough, and the legal action will continue against the company that made the designs and all those involved in this act. The protection of intellectual property rights is something that must be guaranteed.”

Art and entertainment
Courts and the law